REVIEW: Trail of the Tudor Blue by Gwen Roman

“For straight-and-narrow art restorer Ardis Bellamy, a trip to the South of France to reclaim a historic blue diamond necklace should have been only mildly nervewracking. Understatement. In order to succeed, she’s going to have to learn whom she can and can’t trust, give the thugs who are chasing her the slip, and decide whether her growing relationship with sexy “recovery agent” James Tate is worth risking everything for — or whether he’s been double-crossing her all along.”

I love the image of books set in the south of France. The glamour, the chic-ness, the beauty of the area and, due to the movie “To Catch a Thief,” the potential for danger. More on that later. “Trail of the Tudor Blue” lives up to all of these and provided me with my first A grade read this year. 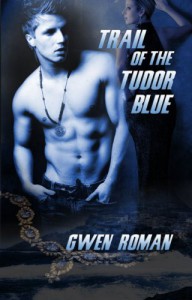 The action, danger and mystery start immediately as you toss Ardis, and us, straight into the story. Since it’s a first person POV telling, it makes sense and keeps everyone on their toes to figure out who’s who, what’s what and have Tate remain as much a wild card to readers as he is to Ardis.

Ardis immediately feels some attraction for Tate but, thank goodness, she keeps a rein on it. I hate heroines who fall in lust with men they’re unsure of and then decide that he must be trustworthy because of those feelings. After all the trouble you take to make Tate a potential bad guy, I would have questioned Ardis’s intelligence. Instead, she’s smart and doesn’t let lust crowd her thinking – mostly. She’s skeptical about what Tate is up to and doesn’t fall into the “I’m in lurve so he must be too” trap. He’s shadowy and she’s in up to her neck with people and situations she’s never experienced so this works for me. I’m a cautious person too so I can really see her POV.

Tate, meanwhile, might appeal to readers who like a hero who initially has questionable motives. Especially if he actually does have them instead of just pretending to. I like that he really is initially out for himself despite any physical attraction he might feel for Ardis. He also fills the “bad boy” role so beloved in romance books and might actually still be something of one when the book ends. And Tate is a Tarheel – yeah!

The development of the romance here is definitely of the “two steps forward, one step back” variety. The actual amount of time that elapses from the start of the story until the end is fairly short but the progression of feelings between Ardis and Tate doesn’t feel that way. In fact, I was actually a tad impatient for Ardis to begin to trust Tate.

The ultimate villain of the piece is a piece of work. But I can see this sort of person hanging around Monaco and southern France – this certainly seems to be the destination for them – and the reason for coveting the Tudor Blue makes sense for a person in this position. At this point, you’d be willing to believe in almost anything to obtain you goal. I love that part of Ardis’s growth as a character involves telling this person off in no uncertain terms.

The book seems to have a good feel for the locations you include. I can see the narrow, old streets of the small towns with flower-box filled windows. I could imagine Ardis as Grace Kelly roaring around twisty road curves and slightly scaring Tate with her Ferrari driving skills. The sea off the coast of Sardinia sparkled in my mind and I wouldn’t mind owning the villa that slimy Ahnshen has. BTW, I love his man-maid Curtis.

But…but…but here comes a teensy spoiler, my slight niggle and what brings the grade down.

Ardis and Tate get what they came for in the end and Ardis then hands the necklace over to a diplomat but …isn’t this the same diplomat set up for her by the villain?
Can she trust that the necklace will get where she wants it to go?

I like the neat segue to the future for Tate and Ardis. This is a marriage of careers and knowledge made in heaven. Also Ardis breaks free of stiff control over her life that she’s been burdened under after her feckless father darted in and out of her life. I’m left with an image of her blossoming into the woman she’s always secretly wanted to be.

So adventure, suspense, romance – the book manages to balance all three without the characters turning to gooey syrup over love. It has vivid imagery, smart dialogue and good pacing. It’s not all breakneck but there didn’t seem to be any sagging in the middle – something is always on the burner even if it’s just simmering. I only reluctantly put the book down when I absolutely had to and end it hoping that there could be future adventures for Ardis and Tate. Good job and it’s nice to start the year with an A- book.

→ Jayne
Previous article: A Sonnet (or two) to the Packers by Sarah Wendell, poetess, and some random thoughts about sports romances
Next Post: Wednesday Midday Links: Classic nook for $79