REVIEW: The Name of the Wind: The Kingkiller Chronicle, Day One by Patrick Rothfuss

By February I had heard enough people mention how eagerly they were awaiting the sequel to your first novel, 2007's The Name of the Wind, that I was intrigued and decided to pick up the first book in the series. 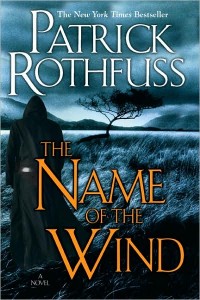 The Name of the Wind begins this way: "It was night again. The Waystone Inn lay in silence, and it was a silence of three parts." The following paragraphs go on to describe all three parts of the silence. The first is "a hollow, echoing quiet," the second the silence of two customers at the bar who "drank with quiet determination, avoiding serious discussions of troubling news." But it's the third silence that is most unsettling, the silence of a red-haired man polishing the bar. It was, the third person omniscient narrator tells us, "the patient, cut-flower sound of a man who is waiting to die. "

The red-haired man is an innkeeper who goes by the name of Kote, but he is also more than an innkeeper, and more than Kote. When a terrifying, spider-like being nearly kills one of the inn's few customers, Kote is the only one who knows what to watch out for and what to do.

Later, a man referred to as Chronicler comes to the inn, and Kote admits to Chronicler that he is Kvothe (pronounced like the word "quothe"), a famous, heroic figure now in hiding. But Kvothe doesn't see himself as others see him, and only agrees to tell Chronicler his story if Chronicler will stay at the Waystone for three days and record Kvothe's tale word for word, without altering anything.

Kvothe's story, told to Chronicler in first person, begins when Kvothe is eleven. Kvothe is one of the Edema Ruh, a highly-regarded troupe of actors and other performers. From his father Kvothe begins to soak up acting and music. From his mother, a noblewoman who left her family to be with his father, Kvothe learns etiquette.

One day the troupe takes in Abenthy, an arcanist (magic user) who helps them with lighting and special effects. Abenthy, or Ben as Kvothe calls him, was educated at the University and teaches Kvothe much of what he knows, including Sympathy, a system of magic that helps Kvothe redirect energy from one object to another. But what Kvothe most wants to learn is how Ben did something Kvothe once saw him do — call the wind so that the wind came and did Ben's bidding.

Ben refuses to teach Kvothe the name of the wind, but he does tell Kvothe's parents that Kvothe is a child prodigy, able to absorb nearly any skill with almost no mistakes. He will be the best at whatever he chooses to be, Ben informs them, so they should think carefully about what opportunities to give their son. Kvothe overhears this conversation and dreams of attending the University, but at age eleven, he does not know what lies ahead of him.

The troupe parts from Ben around the time Kvothe turns twelve, and on that occasion, Kvothe's father performs the first verse of a song he is working on. It is a song about the Chandrian, a group of legendary demons. Kvothe's father is collecting legends about them because he wants to write the definitive song, the one that hearkens back to the root of these legends.

The Chandrian are believed to be nothing more than a superstition, but one night Kvothe returns from gathering firewood to find his entire troupe dead, and the surrounding fires burning blue, a sign of the mythical Chandrian's presence. And indeed, the Chandrian are in front of him for a few moments, before they disappear.

Kvothe is left grieving and utterly alone in the world at age twelve. He forages in the forest and teaches himself to play his father's lute even better. A fateful trip to the nearby city of Tarbean in order to replace a lute string turns Kvothe into an urchin. He lives on Tarbean's streets for three years, until something reopens the memories he has shut away. Memories of his parents and of the Chandrian, of his dreams of attending the University and acquiring knowledge.

Eventually fifteen year old Kvothe arrives at the University and it is here that he makes dear friends and dangerous enemies, here that he learns greater magic, and here that he falls in love. He also cannot let go of his need to get to the bottom of the truth about the beings who killed his parents, even though it places him at great risk.

I enjoyed The Name of the Wind a great deal. One of the things I really appreciated was the device of having Kvothe's tale told by his older self, and the occasional interludes which allow us to see Kvothe in a different place in his life, and to sense danger lurking around the Waystone Inn.

This story-within-a-story structure, known in literary terms as a frame device, gave the book extra richness due to the age gap between the teenage Kvothe and the more mature and weary Kvothe who was telling the story. We got both the younger Kvothe's viewpoint and the perspective of his older, wiser self, who knows things the teenage Kvothe does not.

Alternated with these viewpoints is the third person narration of the frame story, so even though the book is mostly written in first person, there is more variety of voice, perspective and texture than in many first person books.

Still, and although we meet his family, his friends and the woman he loved, there is no question that the focus of the novel is Kvothe himself, and one of the things that kept me reading was the desire to see how he had evolved from the boy he had been to the man telling the story of his youth. Another was Kvothe's voice – witty, opinionated, and as a boy, often unwise.

I think that Kvothe could fairly be described as a Marty Stu (male equivalent of a Mary Sue) character because he is not only a child prodigy, but by age fifteen he is endowed with so many gifts – near perfect recall, a quick and strategic mind, lively curiosity, a talent for verbal sparring, a gorgeous voice and a breathtaking musicianship with the lute, to say nothing of his command of magic.

Normally so many talents in one character would be a sure way to turn me off, so Kvothe's saving grace is his propensity to making big mistakes. He takes chances that most people would not, and while some of them pay off, others land him in trouble. It is this quality, along with his witty opinions, and his vulnerability, that make the younger Kvothe so engaging and make it possible to believe in his genius.

There when many times during the reading of this book that I found myself thinking, "No Kvothe, no! Don't do it!" And he went ahead and did whatever impulsive, courageous yet unwise thing it was I wished he wouldn't do. I see my desire to spare Kvothe from pain and punishments as a sign of my huge investment in this character and his fate. His failings made him real and endearing to me.

One of other endearing things about Kvothe is that he judges people based on their behavior rather than their social status, and doesn't see himself as particularly better than anyone else. He is willing to do some shady things on occasion, but there are other moral lines which he would never in a million years cross. There is a great exchange between Kvothe and Ambrose, the university student who later becomes his nemesis.

Kvothe walks into the University's Archives to see Ambrose and a female student, Fela, at the front desk. Ambrose is sexually harassing Fela, but his family is so powerful that she can't protest, and Kvothe cannot bear to stand by and do nothing. He sees Ambrose's attempt at a poem on the desk, and sets about rescuing Fela by eviscerating Ambrose's writing.

Ambrose looked over his shoulder, scowling. "You have damnable timing, E'lir. Come back later." He turned away again, dismissing me.

I snorted and leaned over the desk, craning my neck to look at the sheet of paper he'd left lying there. "I have damnable timing? Please, you have thirteen syllables in a line here." I tapped a finger onto the page. "It's not iambic either. I don't know if it's anything metrical at all."

He turned to look at me again, his expression irritated. "Mind your tongue, E'lir. The day I come to you for help with poetry is the day–"

"- is the day you have two hours to spare," I said. "Two long hours, and that's just for getting started. "So same can the humble thrush well know its north?' I mean, I don't even know how to begin to criticize that. It practically mocks itself."

"What do you know of poetry?" Ambrose said without bothering to turn around.

"I know a limping verse when I hear it," I said. "But this isn't even limping. A limp has rhythm. This is more like someone falling down a set of stairs. Uneven stairs. With a midden at the bottom."

"It is a sprung rhythm," he said, his voice stiff and offended. "I wouldn't expect you to understand."

"Sprung?" I burst out with an incredulous laugh. "I understand that if I saw a horse with a leg this badly "sprung,' I'd kill it out of mercy, then burn its poor corpse for fear the local dogs might gnaw on it and die."

How can you not love a character like Kvothe? I couldn't help loving him. A lot of the charm of this book is Kvothe's charm, his indelible appeal, as well as the human scale of his personal story. If he isn't the hero others think he is, he is still more heroic than he gives himself credit for.

The Name of the Wind clocks in at 726 Kindle pages, or 13,459 locations. That is one long book, a huge investment of time, especially when you consider that it is only the first of the three parts of Kvothe's story. The early parts of the book, especially the beginning at the Waystone Inn and then the time Kvothe spends on the streets of Tarbean, dragged a little for me. But the vast majority of the book was greatly involving and entertaining, and there was an artistry to the narration and the dialogue that makes this book stand out among many others.

Even though I'm not usually one to embark on such long tomes, much less series that follow the same protagonists, I find myself anticipating book two. As for The Name of the Wind, it is a terrific novel and one I can easily see myself rereading. A-/A.