When I hear the name “Malloren,” I go to point like a champion gun dog. I’m there, poised and ready to read. But, after my disappointment that your last book didn’t work better for me, I opened this one mentally chanting, “please, please, please.” My prayers paid off as I enjoyed this book with it’s realistic view of the challenges 18th century women endured. 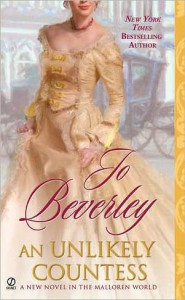 Prudence Youlgrave (love the name, BTW) allowed her anger to get her into a situation one dark night in Northallerton, Yorkshire. But luckily a knight errant charged, albeit drunkenly, to her rescue. In the aftermath of being escorted home as quietly as Prudence could make him act – the neighbors will talk you know – Catesby Burgoyne, second son and disappointment of the Burgoyne family, learns about why Prudence is living in near poverty.

After losing their home, she and her mother scrimped to allow her brother to train as a solicitor. Her mother recently died and now Prudence is waiting for said brother to come for her as he’s soon to be married to a prosperous merchant’s daughter. But he hasn’t come, hasn’t written, hasn’t made any move to rescue his sister. Catesby and Prudence part with fervent well wishes for her on his part but as a near penniless man he’s in no condition to offer more.

Tired of waiting, Prudence decides to take charge and head to her brother’s new house when she discovers he’s not even invited her to the wedding. She and her new sister-in-law take each other’s measure and come to an agreement that Prudence will be presented to Darlington society to find a husband. Prudence’s desires are modest – a home of her own, a man she can respect and children – but when only one man offers for her, she takes a deep breath, tries to ignore her inner longing for a man like the dashing Catesby and agrees to wed the older widower.

Meanwhile, Catesby’s fortunes have changed dramatically since the death of his older brother the Earl of Malzard. Though he’s never wanted the Earldom and its attendant duties, he is fiercely glad to be home again despite the fact that he knows his mother and widowed sister-in-law are just waiting for him to screw up. Escaping from the pressures for a day, he travels to Darlington where he discovers that Prudence is to be married that morning. But as he watches the wedding unfold, he knows it’s a disaster in the making. That inner voice which served him well as an Army officer pipes up and he objects right on cue when the vicar asks, “Does anyone know of any reasons….?”

But now the fat is in the fire and Catesby and Prudence must wed to maintain the fiction Catesby wove to support his actions and to keep her reputation from being ruined. After Catesby brings his most unsuitable Countess home, they have to learn about each other, face his scandalized family and dodge the attentions of a thwarted man bent on revenge.

Despite the fact that I love the fashions of the mid 18th century, I know I wouldn’t have wanted to be born then. Compared to the opportunities and freedoms I have, the position of women then could be ghastly. Under the control of men for almost their entire lives, their happiness depended on whether or not those men were saints or sinners. Denied the chances available to men, they were forced to make their way as best they could arrange it. The story upon which you based part of this book is heartbreaking. Thank goodness Prudence gets a fate better than that at your pen.

I like both Prudence and Catesby. They are strong characters in a world which expected little from them and thought less. Prudence, as a woman, is supposed to be meek and allow her brother to run her life but instead she supports herself and tries to make her own pathway to a life she wants. Catesby, the ‘nail that sticks up’ in the Army, inherits a position he never wanted but is doing his best to see to those who depend on him. And not throw over the traces too much. As these two discover more about each other, they find a fellow comrade-in-arms and support.

But they’re also not perfect. Prudence really isn’t initially suited to step into the shoes of a Countess and flounders a bit before finding her feet. I like the way you impart information about what the position entails, the day to day running of the house, the servant heirarchy and the fact that simply marrying a peer was only the beginning of Prudence’s duties which were as demanding of her as Catesby’s were of him.

Catesby has never been trained to be an Earl and though he’s got the aristocratic bearing, he’s still learning about field drainage, crop rotation plus a 1001 other things. He does take advantage of his perks though when the occasion calls for it. I like that he’s honest with Prudence about certain situations her actions cause even as he shows his decency towards the people involved.

The romance proceeds slowly despite the short time span of the book. I didn’t feel it was rushed and it makes sense given the fact that though these two feel a deep immediate connection, they still really don’t know each other well and have another issued hanging over their heads given what Prudence’s first fiance alledges. There’s a delightful lack of stupid mental lusting though you make it clear that they each find the other very attractive and are looking forward to consumating their marriage. And when the “I love yous” are said, they are timely and believable.

As for the villains of the piece, the bloodthirsty wench in me agreed with Prudence and Diana, Countess of Aradale, that I wanted to see that man go down. The revenge Catesby engineers might not have done the man in but, as he says, losing power and wealth were far worse for that person than death. The other malcontents of the story might not ever change their baseline opinions of Prudence and Catesby but their guns are spiked and perhaps one of them might eventually come around.

I closed the book with a happy smile on my face and a feeling that all’s right in the Malloren World. Prudence might still need a bit of time to settle into her new life and Cate probably still needs to brush up on his agricultural knowledge but with the two of them standing side by side, they’ll do just fine. B+