REVIEW: Swept Off Her Feet by Hester Browne

I’ve heard of the “Little Lady” books but no, shame on me, I’ve never read them. But when a friend of mine told me about “Swept Off Her Feet” and that she’d really liked it, the blurb got me interested in it. After she assured me that there’s no faux brogue dialog I was in. I’ll go ahead and say that if I’d read this back in March when it was first released, it would have been a recommend read from me. As it is, it’s probably going to be on my best reads of 2011 list. 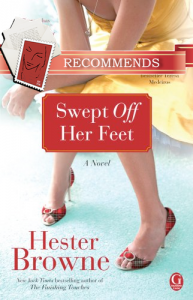 Evie Nicholson loves her work as a buyer for an antiques dealer in London. But as she’s more interested in and, as the blurb says, “spins fanciful attachments to” the personal history of the little items, what she comes back from auctions with doesn’t always meet her boss’s approval. But her sister’s invitation to a ball held in a Scottish castle might be Evie’s road to redemption.

Kettlesheer Castle is the site of an annual ball held on Valentine’s Day and Alice’s boyfriend Fraser is the boyhood chum of the current McAndrews heir, Robert. Alice has finagled an invite for Evie to go and assess certain family pieces for possible sale as the upkeep on the drafty old place is enough to bankrupt small nations. Past McAndrews were the types who never threw *anything* away, so antiques dealers have long salivated at the thought of what might be tucked away in the Castle. Evie’s boss is hopeful of some spectacular finds and sends her up to Scotland with strict instructions on what to look for. Evie, being Evie, is more drawn to the personal stuff though she can’t seem to get tough businessman Robert interested in his family’s past or the romantic daydreams Evie spins about the place.

With the ball fast approaching, family and friends – including one calculating young woman who’s angling to become the next mistress of Kettlesheer – are in a frenzy of preparation even as Evie is down on her knees checking dovetailing. Will she find the spectacular pieces needed to save the family finances? Can she get Robert to view his heritage as more than a draining, lifelong anchor around his neck? And what will the two of them do about the feelings obviously simmering between them and waiting to boil over during the magical candlelit gala?

I see this book as a sort of evolution of the standard Chick Lit book. Evie has a tatty job but it’s one she really loves. It’s pretty obvious from early days who the hero will be and Robert is front and center through most of the book. Evie and Robert don’t initially hit it off as Evie has a semi-crush on Fraser – who is clueless about it and devoted to Alice the entire book – but these two don’t snipe at each other either. Robert is aware of the soundtracks Evie plays in her head as she swoons around Kettlesheer and imagines herself in Jane Austen settings there but though he shakes his head and doesn’t understand or share her romance with the place, he never mocks her – just gently teases her at times.

Robert may be a tough businessman but he’s also a bit of a romantic – at least for Evie. He’s practical to her daydreaming but they “fit.” The scene where he shows up before the ball with some of his great grandmother’s fancy gewgaws for Evie to wear, then sits back and enjoys watching her get excited over them shows me that he does know what she likes and that he wants to please her. Points to him for wanting to make his woman happy. Even if they hadn’t shared a kiss yet. When that “plane going down” kiss did happen, I sighed.

Most everyone in the book is good hearted, though not in a Sally Sunshine way, and even the calculating young woman is treated kindly and isn’t a total beeyotch just for the plot. The story is also brimming with humor and I literally laughed out loud more times than I remember. The teaching-Evie-to-reel scenes were fantastic though I winced when I read how true to life they were. Since I have two left feet as well, I can sympathize with her bewilderment during the Eightsome Reel and would probably end up on my ass after a twirling as well. Though after watching a full fledged 51st Division Reel on youtube, I think I’d be itching to get out and try it myself. The Hamilton House sounds like flirty fun too.

This is a happy book. A fun and funny book that put a smile on my face. I think Robert and Evie will be a good team together with each complimenting and bringing out the best in each other. The humor comes from the situations in the story and not from Evie being made to pratfall for laughs. The characters seem fairly realistic and not exaggerated merely for the plot. And it’s an excellent sign when I finish a book and immediately want to go back and reread my favorite bits. Think I could get an invite to the Kettlesheer Ball next year? A-

→ Jayne
Previous article: Introducing the “mistorical,” and The Uses and Limits of History in Romance
Next Post: REVIEW: A Dance with Dragons by George R.R. Martin