Archangel’s Blade opens with a flashback in the vampire Dmitri’s POV, one that takes us back to Dmitri’s human life. In the flashback, dark, ruthless Dmitri is revealed to have once, a thousand years ago, been a loving and tender hearted man devoted to his two children and to his wife.

Smiling at his son’s joy, he looked up and saw her in the doorway. His wife. With their new daughter in her arms. His heart twisted into a knot that was almost painful. 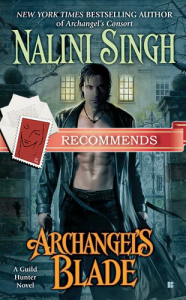 Sometimes, he thought he should be ashamed to love his wife and children so much, until the days when he went away to the markets were a rare anguish…but he could not bring himself to believe it.

This picture of domestic bliss is almost shocking in contrast with the Dmitri we know from the three previous Guild Hunter books. As the Archangel Raphael’s second-in-command, Dmitri could not be more loyal – and ruthlessly cold. He is said to love no one, and to like his pleasure twined with pain.

Though she has never met Dmitri, Guild Hunter and ancient languages expert Honor St. Nicholas is well aware of his reputation. She has spent years observing him on television and from afar due to an inexplicable obsession, but the thought of a close encounter with him or any other vampire now terrifies her.

Ten months ago Honor was kidnapped by vampires and raped and tortured for eight weeks. While two of her attackers were killed during her rescue and two more captured alive, no information about the rest of her tormentors has been uncovered. Honor has been hiding in one of the Guild Academy buildings since the assault, so when Sara, the Guild director, calls her and informs her that she is needed to consult with Dmitri on a case, Honor feels shattered.

Nevertheless, she manages to scrape enough strength to pull herself together and meet with Dmitri at The Tower where he oversees Raphael’s empire. The encounter is anything but soothing – Dmitri presents Honor with a young vampire’s severed head whose tattoo he wants her to decipher.

Moreover, Dmitri is attracted to Honor, though she is far from his usual type. When he puts his hands on the back of her neck and she slices his face in instinctive self-defense, he promises her private, intimate retribution at his hands. But things begin to change when Dmitri learns what Honor suffered, and vows to bring all the remaining perpetrators to justice.

As he takes Honor along on his excursions to find her attackers and to mete out punishment to them, a bond develops between Honor, who slowly gains confidence and begins to trust this one vampire, and Dmitri, who persistently denies that he can have a lasting or meaningful relationship with any woman – but finds it difficult to deny Honor whatever she needs.

Archangel’s Blade is a melding of more than one genre, with elements of mystery, thriller, horror, urban fantasy and romance. From these disparate genres you craft a nearly seamless, powerful, riveting novel. I found myself wholly absorbed in Dmitri and Honor’s story as I watched both characters transform – Honor into a courageous survivor, Dmitri into a more human, tender, loving badass than he’d been before.

I appreciated that it was acknowledged multiple times how thin is the line that separates Dmitri from the villains he takes down. There’s a cruel streak in him at times (especially in the beginning of this book), and in the earlier books, I hated the way he forced his seductive scent on Elena.

One of the reasons I was able to love Dmitri despite this is that the vampire Dmitri was contrasted with the human he had once been, sweet, caring and loyal above all to his beloved wife and children. You do a great job of showing what a lovely person that human Dmitri had been, how much he had lost, and showing also, that some remnants of that man were still in Dmitri.

Honor is also haunted, not just by the events of her recent past and her foster home upbringing, but also by an inexplicable sense of loss she has always lived with. I felt that past and present weren’t quite as well-integrated in her as they had been in Dmitri’s character. Surprisingly, it was easier to see the human Dmitri in him than it was to see the woman she’d once been in Honor.

But despite this, Dmitri and Honor’s journey gripped my guts and my heart. Seeing these two lost souls find love and acceptance with one another wasn’t just compelling, but also deeply moving.

Each time I read one of your books, I’m of two minds about the prose style. On the one hand, it feels a little choppy and repetitive at times, but on the other hand it’s also vivid, powerful and distinctive, and when I enjoy a book this much, it is difficult to complain.

A bigger problem for me, especially with this series, is the violence. This book is not for the squeamish or the faint of heart. Still, although the violence disturbed me, it also worked better for me than it has in the previous Guild Hunter books. I was quickly plunged into the dark places Dmitri and Honor inhabited and from there, followed their struggle toward a ray of light.

It was brave of you to tackle this much darkness and emotional baggage in one book. I was so touched when, at the end of the book, Honor and Dmitri fully understood and embraced the love they had found in each other, and yet, they had both lived through so much heartbreak and pain that the book left me a bit melancholy despite the happy ending.

Nonetheless, for its intense emotional quality and its romantic and redemptive feel, this is my favorite installment of the Guild Hunter series so far. B+/A-.