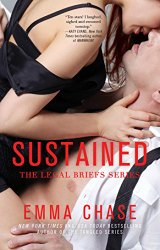 A knight in tarnished armor is still a knight.

When you’re a defense attorney in Washington, DC, you see firsthand how hard life can be, and that sometimes the only way to survive is to be harder. I, Jake Becker, have a reputation for being cold, callous, and intimidating—and that suits me just fine. In fact, it’s necessary when I’m breaking down a witness on the stand.

Complications don’t work for me—I’m a “need-to-know” type of man. If you’re my client, tell me the basic facts. If you’re my date, stick to what will turn you on. I’m not a therapist or Prince Charming—and I don’t pretend to be.

Then Chelsea McQuaid and her six orphaned nieces and nephews came along and complicated the ever-loving hell out of my life. Now I’m going to Mommy and Me classes, One Direction concerts, the emergency room, and arguing cases in the principal’s office.

Chelsea’s too sweet, too innocent, and too gorgeous for her own good. She tries to be tough, but she’s not. She needs someone to help her, defend her…and the kids.

And that—that, I know how to do.

This is so not a book I would have thought I’d ever end up loving. On the surface, the blurb sounds like it could be a sugar overload of fluffy bunnies, unicorns and heartwarming scenes. But when Jane featured it as one of our Daily Specials a few weeks ago and then people chimed in that it was so good, I had a “what the hell” moment and bought it. If anyone had told me a month ago that I would be inhaling and loving a “1st person hero POV from a manwhore” story with an aunt and six orphaned nieces and nephews I would have asked what you had been smoking and did you enjoy it.

Jake starts as an asshole but he’s an entertaining one. Though I wonder at how he speaks to one of his dickless moron YA clients. He’s a quick hookup man until a possible brush with an STD has him actually – son of a bitch – working out the logistics (3 dates before getting laid??!) of dating since his friends tell him if he actually knows the name of a woman, there’s less chance of disease transmission. He’s also an uber ruthless lawyer in a town of ruthless lawyers. But his dick – which almost seems like a secondary character – will have to wait even longer for some action as his life as he knows it is about to be upended.

The story creeps up on you almost effortlessly but – important point here – believably as Jake gets sucked into their lives like he’s sinking into quicksand. Before he knows it, he’s a manny, watching an 80s movie with six kids as well as enduring 4 hours at a boy band rock concert and nearly going deaf from the teenage girl squealing. What the hell just happened to his life? This family and Chelsea in particular really make him change – not quite kicking and screaming but definitely in disbelief and to the amusement of his friends. They make him think – fucking hell – of family things.

The obstacle race he and a douchebag father get their two year olds into at a Mommy and Me afternoon is hysterical. Men are so competitive.

As the story continues, eggs are being laid which at some point have to hatch into chickens which will come back to roost – and I’m waiting to see how and when. The ways and means make sense given the road signs along the way. But Jake’s sudden relationship duck and cover is a fairly sudden about face. The reason, that he’s finally decided to go all noble and “do the right thing” by Chelsea and the kids since he thinks he’s sucky long term material does make sense, though. Good for everyone that his friends pull out their lawyer cross examination techniques and crack down on his bullshit leading to his going down in Family Man flames. So, me enjoying a horny hero, a sweet heroine and six rug rats plus a dog? Who’d’ve thought? A-