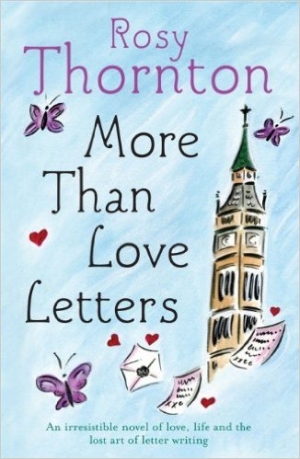 When Richard Slater receives a letter of complaint from one of his constituents, a Margaret Hayton, he merely responds with his standard letter of empty promises. Clearly, this woman is insane and must be avoided at all costs. But she will not be dismissed so easily, and when Richard finally sets eyes on the ‘twenty-something vision in stone-washed denim, with a cloud of dark ringlets and huge, serious eyes’ he risks losing his heart, his head and quite possibly his political career.

A secondary character is a victim of childhood sexual abuse. The other characters discuss how to help her, a few of her diary entries appear and she ultimately commits suicide. Other women at a shelter have been victims of domestic abuse.

This is the third one of your books I’ve read and I can honestly say I’m never quite sure what you’ll write about or how you’ll write it but it will be something different for sure. The blurb for this only hints at how charming it is and it was only when I started it that I realized what a treat I was in for.

“More Than Love Letters” is that rarity in romance, a completely epistolicly told story. Only now with added modern means of communication including emails, newspaper articles, and meeting minutes among the actual written letters. As I read it, I couldn’t help but think it a mix of Rainbow Rowell’s “Attachments” crossed with an earnestly intended version of Don Novello’s “The Lazlo Letters.”

Margaret is young, fresh out of uni and in her first teaching job. She’s also the type of person the world needs more of – the dedicated windmill tilter who will take on any cause that crosses her path and try to do something to make that better. Unfortunately Richard Slater at first identifies her to a friend as a writer of LFNs (letters from nutters). As an MP, he and his friend Mike are well used to the types who hang out at their surgeries (note for Americans – this is just a meeting and has nothing to do with the British NHS) vociferously whingeing about nothing. Richard’s advice to Mike on how to dodge these complaining constituents is ingenious as well as hilarious. Little does Richard know that Margaret is not a fusty fifty year old in sensible tweeds but a goddess who will upend his life.

Margaret does write letters about almost anything that she feels needs addressing in Ipswich from the need for more dog waste disposal containers in the local park and replacement of burned out streetlights to the plight of a young Albanian refugee who is staying at a local women’s shelter at which Margaret is a volunteer. The (Ips)Witches, as Richard at first designates them to Mike, may initially seem like busybodies but their book long dedication to the women at the shelter is comforting and renewing. It makes me want to go out and volunteer somewhere.

This part of the book also provides part of the serious side of the story which I referred to in the trigger warning above dealing with depression, abuse and suicide. None of these issues are treated lightly or disparagingly and again I would emphasize that readers with these triggers in their lives should tread cautiously.

Richard’s journey from a cynical MP trying to suck up to the ROTW to escape the backbenchers, to a reluctant listener to Margaret’s issues, to taking pleasure in actually doing what an elected official should do – help those he represents – to doing something truly monumental for female asylum seekers who don’t meet the standard criteria is wonderful. By the end of the book, he begins to match Margaret’s crusading zeal while still toeing the party line.

He’s also a great beta hero who gallantly puts Margaret’s needs ahead of his own (his exchanges with mate Mike over his heroic determination to keep from taking any advantage of her are a scream). Their slow romance is delightful with stops and starts each misinterprets and would be both horrified and encouraged to know how the other really feels. True British at their best as they attempt to avoid the worst possible thing – public embarrassment. Yet Richard is actually quite the romantic and his love letter to Margaret deliciously curled my toes.

I enjoyed the secondary characters as well. Margaret’s friend Becs and her alphabetical dating adventures as well as their comparison of their teaching experiences is great fun. Margaret’s gran is a treat without being played for elder laughs and her landlady is a sweet mothering presence. In fact all these characters are well rounded, vivid and entirely realistic. It was as much fun reading about their sides to the story and the bits of what they were up to as it was keeping up with Margaret and Richard. “More Than Love Letters” is a lovely mix of mostly wonderful leavened with enough serious to keep it from even glimpsing Tweedom. A-