REVIEW: A Duchess in Name by Amanda Weaver

Carina Press sent DA a review request describing three new releases, one of which was A Duchess in Name. The novel sounded intriguing, so I gave it a shot. When I got  the email with the ARC, I clicked on the attachment to see what I thought of your writing. Hours later I was still at my desk, reading. 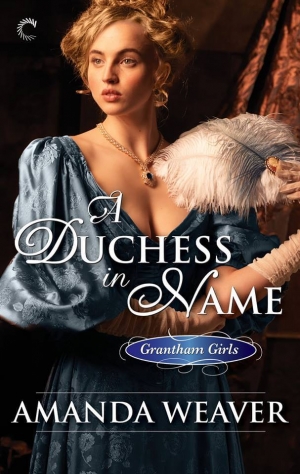 The 1891 set prologue that introduces the heroine, American heiress Victoria Carson, and her two finishing school friends as well as the schoolmistress, another friend, felt like superfluous sequel baiting. Soon after that, though, we move forward to 1895 and see Victoria’s parents (somehow they both live in England, even though her father is an industry magnate and his businesses are in the US) scheming to catch her a titled husband.

Victoria knows she’ll have to marry a nobleman and has resigned herself to a life without love. Anything would be worth it just to get away from her parents’ house. She thinks she might be trapped in a marriage to an aging lecher so when the handsome Andrew Hargrave, heir to the Duke of Waring, proposes it seems like a stroke of good luck.

Luck has nothing to do with it, though. Andrew was recalled to England from Italy, where he was excavating an archaeological dig for Etruscan ruins along with his friend, Randolph, and his other friend as well as lover, Luciana, expressly to marry Victoria. It seems his father lost the last of the family’s fortune, as well as Andrew’s hand in marriage, in a card game with Victoria’s dad.

Andrew’s father isn’t a good father. Andrew isn’t his biological son (the previous heir and biological son is now dead), and the duke doesn’t really give a damn about Andrew, as long as he does his duty and marries Victoria. Andrew’s mother has a roving eye and isn’t very nice, either, so the only reasons Andrew agrees to marry Victoria are his two younger sisters, Emma and Louisa, whom he loves.

At first, Andrew is determined not to like Victoria, whom he believes is marrying him only for his title, so he slinks back to Italy, promising to return for the wedding. But he finds Victoria attractive (the attraction between them is immediate, but written without the clichés I associate with mental lusting).

Andrew is starting to view Victoria as a decent person and feel conflicted about his actions, when, on the eve of the wedding, he learns something shocking. Before the card game that sealed Andrew’s fate, his family was on the verge of bankruptcy due to a bad investment in a fake Canadian railroad company that Victoria’s father duped Andrew’s father into sinking his money into.

Yes, Victoria’s parents bankrupted Andrew’s family strictly to secure the title of duchess for their daughter (I found this hard to buy, but since it was the premise of the novel, I went with it. As Jia says, every novel gets one gimme). When Andrew learns of this, he is furious, believing Victoria to be complicit in her parent’s schemes, but since he can’t bear to see his sisters destitute, he goes through with the wedding.

Victoria, unaware of her parents’ actions, is taken aback at her fiancé’s sudden coldness. But the couple marry and travel to his family’s ramshackle country estate. There, a drunken Andrew and a nervous Victoria consummate the marriage in a surprisingly passionate wedding night. But the next morning, Victoria awakens to discover that her husband has hightailed it back to Italy again.

Will Victoria get over Andrew’s abandonment? Will she restore the ducal estate to its former glory? Will Andrew return to England? Will he realize that his wife is innocent of wrongdoing and that their marriage deserves a chance?

After the initial wobbly beginning this book turned into a very emotional reading experience, the kind that wrings a lot of tears. I really felt for Victoria, who through no fault of her own was trapped in a marriage to a man who seemed to hate her, and then unceremoniously abandoned after the wedding night.

This is a trope that taps straight into my gut and one that I find difficult to resist, though it’s sometimes hard to pull off in a way that makes for a convincing HEA. I was glad to see it used here because it’s one I associate with the historical romances of the 1990s, an era I loved and miss.

As I read, I thought of Miranda Neville’s Lady Windermere’s Lover and Joanna Chambers’ Unforgivable, two recent books that utilized that same trope. I felt that this book was more successful than Unforgivable at convincing me that the hero and heroine could have a happy relationship, but less successful than Lady Windermere’s Lover at showing some of that happiness on the page.

While Andrew was a cad to assume that Victoria was a party to her parents’ schemes without taking the time to find out if this was actually the case, and then to continue seeing his mistress, Luciana, the horrible way in which he was forced to marry Victoria made it understandable.

Andrew compounded these mistakes later, though, and after that, I wasn’t sure I could ever come around to rooting for him. Still, his relationship with Luciana became so half-hearted after he’d met Victoria that it was also clear he had begun to fall for the wife he had abandoned.

I don’t know if I ever fully came around to rooting for Andrew, but I kept reading because I was rooting for Victoria, and to see what would happen. It took too long for Andrew to come to his senses, but he had a loving side he began to show Victoria in the second half of the book. Victoria’s determination not to fall for him again was heartbreaking, especially in light of the fact that she didn’t know what had caused him to treat her badly in the first place.

Some of this could have been cleared up with a conversation, although it surely would have been painful for Victoria to hear what her parents had done. I wanted, at the very least, more insight into Andrew’s reasons for keeping quiet on this score.

The sex scenes in the second half of the book are impossible to skip. Victoria wants a baby, while Andrew wants a second chance. She is determined to protect herself from falling for him, and that makes these high-stakes love scenes riveting.

The book feels lopsided, though. The main characters are both vividly drawn, and Andrew isn’t a villain, just a man who stumbles too many times in his dealings with Victoria. But Victoria is such an utterly lovely person in almost all her interactions that I was 100% on her side. And by the end of the book, I felt she had suffered more than she deserved, and hadn’t gotten very much happiness.

Not all of her suffering was Andrew’s fault (some of it is her parents’ and some just bad luck), but she had been through so much that by the end of the book I wanted to see her get the brass ring. I could believe that there would be happiness in her future with Andrew, but I wanted more joy in their interactions so that I could be happier for her when the resolution finally arrives.

With all that said, the book is very readable — I inhaled it in one sitting, without intending to do so — and once Victoria and Andrew meet, it starts to move along at a good clip.

I was impressed with the sex scenes (even the early ones, not just those that I described above) because they are all crucial to the development of the relationship. The way the conflict between the couple plays out in the bedroom makes them memorable.

Among the secondary characters, Victoria’s former finishing school schoolmistress and friend (something that seems odd), Genevieve, was more interesting than Victoria’s two schoolmates, Amelia and Grace, whom I found totally forgettable. I liked Andrew’s sisters, Louisa and Emma, somewhat better. Victoria and Andrew’s parents were all four relentlessly awful and had little dimension, but Luciana, Andrew’s mistress, was refreshingly honest.

There were one or two things in the book that I found hard to swallow; for example that Victoria has Debrett’s Peerage memorized. Unless she has an eidetic memory, that seems unlikely — it would be as hard as memorizing a telephone directory.

I’ve debated with myself over how to grade A Duchess in Name over and over. It’s a book in which I could see a lot of flaws but also considerable strengths. It appealed to me a great deal, but I’m not sure if it will to others. Since it’s stuck with me, and since I’ve already preordered the next in the series, I’m giving it a B-.