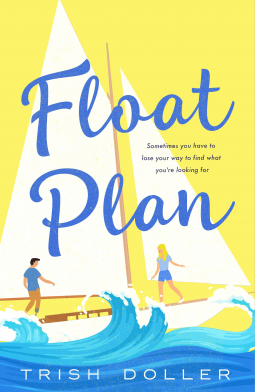 Way back in the day I read Something Like Normal and I’ve been a fan of your work ever since – albeit that I stick to the romance titles because I need my HEA. You wrote a lot of YA books in the interim, not all of which were romances. I was so excited to see you dip your toe (see what I did there?) into adult contemporary romance with Float Plan. To stretch my punny metaphor even further, come on in, the water is fine!

Float Plan deals with some tough topics and for that reason, I do recommend readers note the Content Warnings I have included. However, if they are not a barrier, I can heartily recommend this book.

Anna Beck is still grieving the death of her fiance, Ben Braithwaite, by suicide some ten months before the book begins. He had been fixing up a sailboat, an Alberg (as yet unnamed) and planning on sailing it from their home in Fort Lauderdale to the Turks and Caicos Islands, a journey of some 1700 nautical miles. Anna inherited the boat in Ben’s will and has decided to commence Ben’s planned trip by herself. I can’t imagine taking on anything so daunting. Anna is part fearless and part desperate for some kind of release from her grief, but all fierce.

“This ist crazy, Anna. Crazy.” My mom has lived in the United States longer than Rachel and I have been alive, but German words frequently slip into her speech, particularly when she’s stressed. “You should not be going to sea in a boat you have no business trying to sail. You need to come home und get some help.”

This isn’t the first time we’ve had a conversation about me seeking professional help, but I don’t need a therapist to tell me that I’m the only one who gets to decide how long my grief should last, that it’s not my job to make other people less uncomfortable around me. I am not ready to get on with my life. I am not in the market for a new soul mate.

It really spoke to me, that line about how she is the only one who can decide how long her grief should last. It’s a feeling I’ve lived in myself. Spoiler Alert: Being told to hurry up and get over it is NOT HELPFUL.

After a nearly very disastrous sail to Bimini, Anna realises she needs some experienced help and advertises for a sailing assistant. Enter Keane Sullivan, an Irish national who has spent the last decade or so sailing professionally.  He was injured in an accident and lost the lower part of one leg (below the knee) and since that time has struggled to find work doing what he loves, the racing community believing him to be a liability now that he’s got a prosthesis.  Keane has learned how to adapt, both with and without his prosthesis when sailing and it does not cause him to be less capable despite the assumptions made about him. His expertise and experience are a godsend for Anna.

In addition to being an awesome sailor, Keane is also an awesome guy. What you see with Keane is what you get. There is no artifice with him and he wears his heart on his sleeve. He is not deceitful or mean. He’s generous and kind and funny and hot. It’s clear he notices more about Anna from the start than just her need for assistance in her journey but he’s also a sensitive soul who knows better than to push or do anything inappropriate. I’d say he’s a bit of a cinnamon roll but actually. There’s no grumpy exterior or hard outer shell – he’s pretty much all competent marshmallow but also brave and fierce too.  In that way (as well as others), he and Anna are a perfect match.

Anna is open too, about her grief and about why she’s sailing to the Turks and Caicos and why she has the itinerary she does. Keane knows Anna is not over Ben and so does not attempt to act on his attraction for what turns out to be a large portion of the book.  But romance readers have no need for despair – the intimacy and the friendship, the banter, fun and even the arguments, between Anna and Keane are all clear roadmaps to where things are going.

This journey is not just a physical one for Anna.  It is a way of processing her grief and helping her to move on.

“Sometimes I wonder if I’ll ever stop thinking about him.”

“Don’t know why you would,” Keane says. “Eventually—and I say this from experience—you’ll start building a new house beside the ruins of the old. When you’re ready, you’ll know.”

As much as I adored Keane (and I really really did), this is very much Anna’s book. It is her journey and it is her victory (though Keane has some victories of his own as well).

There were few things I didn’t like about the book. I was enjoying Anna and Keane so much that as I headed to what I believed would be the inevitable dark moment where everything went wrong (I’m not going to tell whether what I believed came true) I kind of shied away from reading on. I just didn’t want to see them apart or unhappy because they were so perfect together and each had been through so much already. I just didn’t want any more difficulty for them. Also, as I read this in November 2020, my own resilience was pretty low and that was a factor too. But I can’t hold that feeling against the book. Actually it’s a feature, not a bug because I cared so much.

No, what didn’t work for me entirely was some of the hand-waving at the end where I wanted just a little more detail on what they would do and how it would work. I wondered, frankly, how they could afford to do what they planned in the immediate aftermath of the story (I’m trying not to give spoilers away; I’m not talking about their “project” here, but their next trip). I’m a details girl so that was something I wanted to understand better.

I took a long time to read Float Plan. That was all me. I think I read one entire book in all of November and it was this one! Even though I’m in Australia the US presidential election has such a global impact that I spent a great deal of time freaking out about what might happen and when I wasn’t doing that it was all Covid all the time (and we had it super easy where I am so I realise I’m extremely privileged even so). Considering just how much I was struggling to read, what struck me most about Float Plan was how happy I was to read when I actually did it. Every time I did part of my brain queried why I hadn’t done it sooner. But it’s also a book that you can read over time and not lose anything. It’s a book one could easily gobble down but it can also be savored and there’s no signal loss. I think it’s a book to be re-read too but I haven’t tested that yet.

I loved the information about sailing and the journey to the Turks and Caicos and all the stops in between. I enjoyed the diversity of the broader cast and the sensitive and matter of fact way Keane’s disability was presented. I also appreciated the history of parts of the Bahamas and I was particularly touched by the respect paid to to the history of the slave trade in that area and the various  natural disasters which had affected some of the islands they visited. I liked the way that locals were effortlessly included in the story and how they became fully fleshed out characters even if they had little page time.

Most of all I loved Anna and Keane, both separately and together. Please Trish Doller, I beg you – write more contemporary romance.

→ Kaetrin
Previous article: REVIEW: The Earl’s Lady Geologist by Alissa Baxter
Next Post: REVIEW: One Day All This Will Be Yours by Adrian Tchaikovsky