This book was recommended to me by Racblog (http://romance-around-the-corner.blogspot.com/) who knows I’ve been reading more New Adult books. I’m using the term “New Adult” which I believe was originally coined by St. Martin’s Press. The period references that post high school, on the cusp of adulthood time period. In some sense, these are classic but more accessible versions of the bildungsroman. 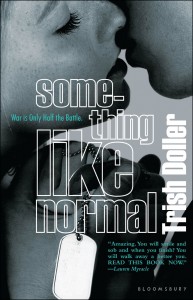 “Something Like Normal” is unique because it is a story told entirely from the male point of view. Travis is on a 30 day leave from Afghanistan. His commanding officer suggested strongly that he take the extra time knowing that Travis hadn’t quite recovered from losing his best friend and fellow Marine, Charlie, in an ambush. When Travis returns home he faces his parents failing marriage, his ex girlfriend hooking up with his brother, and how nothing seems to make sense to him anymore. He’s more comfortable at the local VA than a party with his peers. He can’t even sleep on his bed, preferring the unyielding hardness of the floor.

His nightmares keep him awake at night and when his ex girlfriend, now brother’s girlfriend, visits him late at night, he doesn’t have the internal fortitude to turn her away. He admits that when the two of them were together in high school, they cheated on each other constantly. Their relationship was screwed up and it is no surprise that she couldn’t stick with him while he was deployed. He’s angry that she hooked up with his brother only because his brother seems to be living Travis’ life: dating Travis’ girlfriend, hanging out with Travis’ friends, and even driving Travis’ car.

To make things more difficult, Travis suffers from a strong case of PTSD and believes he sees his buddy Charlie – in the crowd, in the booth across the table, in his bedroom. The only time that he feels comfortable is with Haley, one of the first girls he ever kissed. Unfortunately his cowardly and careless actions branded Haley as a loose girl and she lived under the specter of this for the rest of her junior and high school years.

Sometimes it is said that the military can be the making of a man and for Travis, he finds acceptance and belonging amongst the other Marines. This acceptance wasn’t available to him at home where his father, a former pro football player, withheld love after Travis quit playing football.

Travis’ struggle to cope with life away from the military, the grief and loss he feels, and the desire to be a better person were deftly conveyed in tones that befit a young man who was both arrogant and scared. I particularly loved the realization by Travis that when he was with Haley he wanted to be different, not the callous and irresponsible teen he was when he went away to the Marines, not the cheating bastard he is with his ex.

There are two main areas in which the book stumbles. First, as Racblog notes in her review, the father is a primary source of conflict for Travis yet is underdeveloped as a character. Second, Travis’ road to self enlightenment had only started at the end of the book. I felt like we needed more time with him to be convinced that he was dedicated to moving forward with his life and that he was competently dealing with his war trauma. The story had a slightly unfinished feel to it. B-

PS I bought this at Kobo using the 50% off coupon which resulted in the book being $5.25. Definitely a worthwhile read at that price.