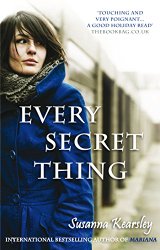 ‘No one lives for ever. But the truth survives us all’

Kate Murray is deeply troubled. In front of her lies a dead man, a stranger who only minutes before had approached her wanting to tell her about a mystery, a long-forgotten murder. The crime was old, he’d told her, but still deserving of justice. Soon Kate is caught up in a dangerous whirlwind of events that takes her back into her grandmother’s mysterious war-time past and across the Atlantic as she tries to retrace the dead man’s footsteps. Finding out the truth is not so simple, however, as only a few people are still alive who know the story…and Kate soon realises that her questions are putting their lives in danger. Stalked by an unknown and sinister enemy, she must use her tough journalistic instinct to find the answers from the past – before she has to say goodbye to her future.

While waiting for your next novel to be published, I thought I’d look back and see which of your books hadn’t already been reviewed here at DA. Well, the short answer is – this one. The blurb didn’t give me much hope for a romance but then you tend to sneak them in among all the other events of your books so I dove in anyway. Truth be told, the majority of the book is devoted to the investigation but there might be the start of a future relationship. However it was the bittersweet wartime romance that had me crying through the last few chapters. In the end, justice is served though maybe not in the way the court system would prefer.

Katie Murray’s sudden, strange life and death involvement in a decades old mystery begins innocently enough. She’s approached by an unknown, older man who says he has a story to tell her about a murder that needs justice done. Katie’s a journalist about to finish one lengthy trial report and pays little attention to this man who doesn’t attract attention. All too soon, he’s dead without having told her much of anything. It’s only her sense of responsibility that keeps her involved in following up on what Andrew Deacon initiated moments before his death.

The mystery deepens the more Katie pokes into it. People are sure she knows something but the fact that she doesn’t know anything bothers and frustrates her. When she is less than subtly told to keep her nose out of it, her journalistic instincts kick in. When two other people are killed who are in some way involved, her survival instincts flare to life. With the help of a friend of a friend, she goes underground to stay one step ahead of someone who is willing to kill to see she doesn’t get any answers. With chilling horror, she realizes that those to whom she ought to be able to turn to for help might be involved with trying to keep her quiet – permanently.

And so begins Katie’s cat and mouse chase across the Atlantic and Portugal where in World War II, Lisbon was filled with spies, agents and counter espionage. She also discovers that family members weren’t just boring old grandma and grandpa who raised her but once were a young and daring pilot who escaped across occupied Europe and an intelligent and vibrant woman determined to do her part for the war effort.

Speaking with those who were there, Katie slowly fills in the pieces of the puzzle and closes in on the person who has escaped justice for decades. But he’s also closing in on her. Whom can she trust and does she dare risk directing the attention of a killer onto anyone who might help her?

I would sink for hours into this story and when I had to stop, it would feel as if I were waking up and surfacing back into reality. The clues are all there but so deftly handled that, like Katie, things didn’t all slot into place for me until just when it all made sense. It is like an intricate Chinese puzzle and unlike other romantic suspense novels that get too twisted in knots trying for everything to make sense, it all effortlessly does here. When the whole picture had been filled in, I was giddy with how perfectly it all fit together. A little more modern romance would have made me happy but this is a book I didn’t want to see end. A-

→ Jayne
Previous article: Daily Deals: Series starters and a throwback mystery
Next Post: DAILY DEALS: I’m back and I bring with me a hockey book