I’ve been slowly working my way through your oeuvre because I like your voice. Devices & Desires, your latest historical romance set in 1888 England, is the first of your books to hit it out of the park for me. 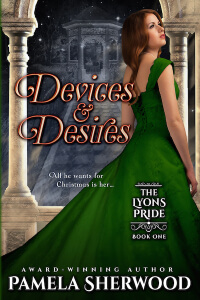 Just before reading it, I read and reviewed the novella that launches the Lyons Pride series, The Advent of Lady Madeline. The novella introduces readers to the contentious Lyons family, a duke, a duchess and their brood of (mostly grown) children.

These headstrong personalities are inspired by the classic film The Lion in Winter. Whitborough, the duke who heads the household, has a controlling character, while his wife Helene can be contrary just to teach him a lesson.

Older brothers Hal and Reggie vie for the role of favorite, with the duke’s attention most often on Hal, his heir, and the duchess’s on Reg. Oldest sister Madeline is strong-willed, youngest brother Jason can be spoiled and petulant, while Elaine and Juliana, the middle and younger girls, are more sweet-natured.

But it was Gervase, the third son, who immediately caught my attention. Neither a favorite nor one who acts out, Gervase is the keen observer of other people’s dramas. His defense mechanism for dealing with the others is to hold himself apart and display a stillness that belies how much he really cares.

Gervase’s appeal to me only increased when, as a nineteen year old in The Advent of Lady Madeline, he broke with his usual display of detachment long enough to get drunk on the night his brother Hal’s engagement was announced.

Devices & Desires begins with a prologue set a year later, in December of 1880. Twenty year old Gervase is visiting his parents for Christmas, and he strikes up a private conversation with Sir Anthony Stirling, his godfather.

Gervase, a candidate for taking a First at Oxford, shocks Sir Anthony by telling him that not only does he mean to defy his father’s wishes to make him a clergyman, he plans to study law and become a solicitor, rather than taking the more prestigious position of barrister. He believes the former will afford him immediate employment and income which will enable him to gain independence.

Sir Anthony agrees to assist him. After they part, Gervase stands in a doorway and observes his family in a festive holiday moment. He realizes that he can, if he wants to, join them and become part of that scene. He takes a step toward them, but halts in his tracks when Hal’s eighteen year old fiancée passes by the doorway.

Everyone in the family knew, to some extent, how much Reg coveted the dukedom and Hal’s place as firstborn.

No one knew—no one would ever know, if Gervase has anything to say about it—how much he coveted Hal’s fiancée.

The novel then flashes forward eight years. Gervase is now twenty-eight, one of the brightest legal minds in the country.

Dining with his law partner, John Addison, Gervase evades Addison’s probing questions, his attempts to get to know Gervase after having worked with him for two years. When Gervase resists his probing, Addison tells him he is known as “the clockwork solicitor,” a hard-working automaton without feelings. A hurt Gervase barely holds on to his temper, but they patch things over.

Arriving home afterward, Gervase is surprised to find the woman he still loves, even eight years later, waiting for him. Margaret, Lady Bellamy, was his neighbor and friend when they were children. As a teen, Margaret had a powerful crush on Hal, Gervase’s oldest brother, to whom she was engaged thanks to their fathers’ desire to unite their two families. She never knew that Gervase viewed her as anything more than a good friend.

Hal’s feelings for Margaret were at best brotherly and at worst nonexistent. Still, he intended to do his duty and marry her, though he dragged his feet. But three years into their engagement, Hal was killed in a riding accident.

Margaret, who had by then fallen out of love with Hal, was attending a Christmas house party at the Lyons’ estate in Yorkshire some months after his death when she stunned her hosts by slipping away in secret and marrying a new, much older suitor, Lord Bellamy.

Margaret loved Lord Bellamy, and now, two years past his death, her grief for him is no longer agonizing, but still there. Having lost a fiancé and a husband, she has no intention of ever remarrying, but she was glad to resume her platonic friendship with Gervase when she moved to London.

Now Gervase and Margaret have both been invited to a Christmas party at his family’s Yorkshire home again. Margaret’s younger sister, Alicia, is engaged to Gervase’s brother Reggie, who became the heir when Hal died, but in an echo of Margaret’s past with Hal, Reg does not return Alicia’s feelings.

Still, the Duke of Whitborough wants to bring the two families closer, just as he and Margaret’s father planned, and Margaret, Alicia, and their brother Augustus are all invited for Christmas, as are the Lyons children.

Given the nature of his family, Gervase has no desire to attend, but Margaret is nervous about her reception. After all, she ran off to marry Lord Bellamy only months after Hal’s death, so she is not sure how Gervase’s parents and siblings truly feel about her. Gervase decides to join the party so that Margaret will know she has at least one friend there.

As she travels to Yorkshire with Gervase in her late husband’s private train car, Margaret becomes more and more aware of Gervase as a man, and a very attractive man at that. But he is so good at keeping his mask on that Margaret has no idea whether he reciprocates this attraction.

When the train lurches to a stop, Gervase catches her before she can fall. He kisses her briefly, but after years of yearning for it, Margaret’s romantic interest has come to seem unattainable to him, while her friendship is very much his. Fearful of losing the latter, he downplays the kiss, only to kick himself shortly afterward and vow that he will make another move when a good opportunity presents itself.

At the house party, it becomes clear that Gervase’s controlling father, not his youngest sister, is behind the party invitation and that Whitborough has an agenda of his own. Gervase’s mother, who has been estranged from her husband since Hal’s death, arrives as well.

It is Reggie, not Gervase, on whom the parents are focused, but neither the duke nor duchess is above using Gervase to effect their goals. And when both of them need his legal expertise, Gervase is wooed by each of his parents for the first time in his life. These machinations present a temptation to him, one that threatens his budding courtship of Margaret.

Will Margaret open her eyes and see that Gervase has loved her for years? Will Gervase be able to put his independence above his needs for recognition from his parents? Can Margaret prevent her sister from making a huge mistake? And can Gervase convince Margaret that another marriage is worth her consideration?

Margaret is a lovely heroine, caring, intelligent and kind, yet vulnerable due to her losses and her fears stemming from her unexpected elopement with Lord Bellamy. I liked her tremendously.

But it is Gervase that makes the book. I am a sucker for a “still waters run deep” character and that is exactly what Gervase is – the still one, the one who hangs back, a quieter, less immediately flashy man than his brothers whose character is fathoms deep.

It doesn’t hurt that I also love the friends-to-lovers / unrequited love tropes, present here in spades. Is there anything more satisfying than seeing a character begin to notice that the loyal friend who has been at her side for years is attractive, thoughtful and all too appealing?

This is, in my humble opinion, a great, great trope because it focuses so strongly on the heart rather the gonads. That’s not to say that this book lacks for physical attraction, but the latter is layered in with subtlety and grace, and not by resorting to clichés.

Additionally, after reading so many romance series that depict families as near perfect, it was refreshing to read about a family as flawed as the Lyons, who loved one another but in a messy and less than optimal way. The secondary characters felt real to me, and as a family, the Lyons were multi-dimensional and believable, more than a construct to create a series around.

I had only a couple of issues.

A scene in which Alicia finally clues Margaret to Gervase’s long-held love for her felt a little off to me. I thought it would have had more impact and believability had this information come from one of Gervase’s sisters, someone with higher stakes in Gervase’s happiness and more knowledge of his past.

Also, the second half focuses more closely than the first half on drama in Gervase and Margaret’s families having to do with their siblings’ engagement, and competition among Gervase’s brothers. It was a well-written depiction but got almost as much attention as the romantic relationship between Gervase and Margaret, whereas the first half honed in on the friends-to-lovers plot.

Overall though, I loved these characters and their journey. The writing was elegant for the most part, with only the rare anachronistic phrase, which made it much smoother reading than many historicals. The characterization was excellent, with the characters’ perceptiveness and their emotional maturity conveyed so well.

After finishing Devices & Desires, I had such a good book afterglow that it took me several days to move on to another. This one gets an A-.