REVIEW: The Advent of Lady Madeline by Pamela Sherwood

I bought this 109-page Christmas novella around the holidays and it sat on my kindle until July, when I decided to read it. The novella, set in England a bit before Christmas of 1879, begins with a conversation between Hugo Lowell, Viscount Saxby, and his sister, Charley. 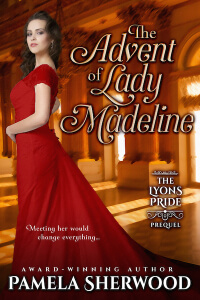 Charley encourages Hugo to join the Duke of Whitborough’s party during Advent. Her and Hugo’s younger brother, Wilf, is also invited, and apt to get in trouble since he’s a guest of the duke’s feckless heir, Lord Denforth. If Hugo goes, he will be able to keep an eye on Wilf and act as a mitigating influence.

Hugo reminds Charley that he will attend Earl Clement’s for Christmas itself. Although he is not yet engaged, he plans to ask Lady Althea Clement for her hand in marriage.

Though Lady Althea is “a paragon of virtue and amiability—along with being pretty and well-dowered,” Charley is sorry to hear this. Lady Althea isn’t not likely to stir things for her brother, who had to mature quickly after their father was paralyzed in an accident and is therefore in danger of growing staid.

Hugo gives in and goes to Whitborough’s party for Advent, intending to leave for Earl Clement’s party at Christmas and propose to Lady Althea then. But while at Whitborough’s, he meets his host’s bright, outspoken daughter, Lady Madeline Lyons, and slowly, his plans begin to unravel.

Madeline has declined numerous offers of marriage because her own parents’ marriage has been a contentious one, but now she has decided she does want to marry after all. She is not aware that Hugo has an understanding with another young lady, and when he helps her and her youngest sister Juliana find a pregnant cat who has invaded his room, she is charmed.

As Advent progresses, Madeline finds herself seeking out Hugo, and he too, finds reasons to spend more and more time in her company. He also finds himself engaging in activities he has never tried in the past, composing letters to Charley in his head that begin with “Never before have I…”

Never before have I attended a cat’s confinement…

Never before have I left a hunt before the kill…

Never before have I attended an amateur theatrical…

Never before have I felt so alive.

Madeline and Hugo are both appealing characters. For all of Madeline’s occasional sharpness or bossiness, she comes across as vulnerable, having been hurt by her parents’ marital difficulties. Her view of her family was rocked when she learned that her father had been unfaithful to her mother, and even though her mother has forgiven him, Madeline cannot.

Hugo, meanwhile, is an affable, innately kind man, friendly and responsible. We see him set that good example for his brother Wilf, and offer Wilf advice as well as a lending ear. He may be an avid sportsman but he leaves the hunt early when Madeline needs to be escorted home.

These two characters are well suited, and their romance is touching and smoothly written, even if it doesn’t break much new ground. What I liked best about the story though, was the unusual dynamics of Madeline’s family.

This novella launches a series about the Lyons, a family inspired by the movie The Lion in Winter. Having never seen this movie, I had no particular interest in homages to it, but after reading countless series featuring siblings who love each other and get along, it was so refreshing to visit with a family that argued and had some issues.

Here, the parents play favorites, so Madeline’s twin Hal, the duke’s heir, and Reggie, the second son and heir to the duchess’s properties in France, are forever fighting. Youngest brother Jason is spoiled, but may yet be salvaged, while sisters Elaine and Juliana are sweeter.

Most intriguing though, is Madeline’s third brother, Gervase, a cool and distant observer of the others’ antics who nonetheless gets drunk on the same night that Hal becomes engaged. Madeline may not understand why, but I was immediately hooked, and I bought Gervase’s book, Devices and Desires (review to come), as soon as I finished reading this one.