REVIEW: Children of Earth and Sky by Guy Gavriel Kay 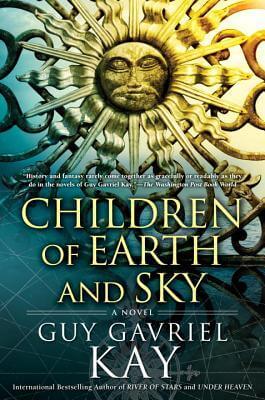 The bestselling author of the groundbreaking novels Under Heaven and River of Stars, Guy Gavriel Kay is back with a new book, set in a world inspired by the conflicts and dramas of Renaissance Europe. Against this tumultuous backdrop the lives of men and women unfold on the borderlands—where empires and faiths collide.

From the small coastal town of Senjan, notorious for its pirates, a young woman sets out to find vengeance for her lost family. That same spring, from the wealthy city-state of Seressa, famous for its canals and lagoon, come two very different people: a young artist traveling to the dangerous east to paint the grand khalif at his request—and possibly to do more—and a fiercely intelligent, angry woman, posing as a doctor’s wife, but sent by Seressa as a spy.

The trading ship that carries them is commanded by the accomplished younger son of a merchant family, ambivalent about the life he’s been born to live. And farther east a boy trains to become a soldier in the elite infantry of the khalif—to win glory in the war everyone knows is coming.

As these lives entwine, their fates—and those of many others—will hang in the balance, when the khalif sends out his massive army to take the great fortress that is the gateway to the western world…

Dear Guy Gavriel Kay, I preordered this book the moment I saw it was available on Amazon, which was some time last fall. When the book was released and waiting for me on my Kindle, I saw you talk about it on John Scalzi’s blog “Whatever.” I found it interesting that you wanted to write a book about the struggles of ordinary people to survive and go on with their lives while the leaders have their own ambitions, fight over whose religion is better, etc. I am paraphrasing here, not quoting, but I do not believe that I misinterpreted the gist of it.

I planned to read the book as soon as it arrived anyway, but now I was intrigued and a little amused, because I have read the vast majority of Guy Gavriel Kay’s books and in my opinion his books have *never* been about the struggles of ordinary people. Actually, no, let me correct myself – of course we see the struggles of ordinary people in his books, we see how innocents suffer during times of wars, religious and otherwise, we see all of that, but it takes place in the background. What I mean is that I do not remember the main characters being ordinary people – whether they have aristocratic titles or not, they have always felt larger than life to me, with extraordinary abilities of different kinds. I was intrigued to see what the new book would bring and I dived in.

Those of you who have read Kay’s books know that they are very much inspired by real historical events, political and religious struggles are often front and center, and in fact the events themselves keep very close to what happened in reality. I’ve always enjoyed his “history with a quarter turn into fantastic” in the settings of his books, but in this one I initially found myself a little distracted from the story because I got caught up trying to figure out which real events/cities/countries were hiding under made up names. I actually found it a blessing to be so incredibly ignorant that I had no idea about two of the places that Kay lists amongst his main inspirations in the afterword. The blurb states that the world is inspired by Renaissance Europe, moreover apparently it is the same world (but several centuries later) as the events in “Sailing to the Sarantium” and “Lions of Al Rassan”. I noticed one very tiny nod to Lions, more like an Easter Egg really, so you most definitely do not need to read it in order not to be lost. Sarantium is more important, but only because the events in this book take place twenty five years after it fell in the fifteenth century. You don’t need to read those previous books either.

The book depicts various struggles for political power, struggles which sometimes become bloody wars, between the Republic of Seressa, the rulers of former Sarantium (renamed Asharias), and people from two places which are apparently located in modern Croatia. In the book these are the city of Senjan and the Republic of Dubrava. Oh, and there is also an Emperor Rodolfo in Obravic and some other important players. In this story Seressa is mainly trying to establish control over as many countries as possible with spies and assassinations while trying to avoid outright war, and Dubrava is trying to survive by balancing the scales and trading with all bigger powers.

“He didn’t like Seressa. Never had, however many times he’d docked here with cargoes that brought Dubravae merchants like the Djivo family considerable wealth—and kept Drago employed as their captain. There was no subtle reason for his unease. He didn’t like Seressinis. Few did, really. Seressa was in the business of making money, not friends—they said that themselves. The two city-states were not at war—Dubrava could never go to war with the stronger republic. Dubrava didn’t go to war with anyone: that was their way of life. War was ruinously expensive, and they weren’t powerful enough, in any case. They were merchants and diplomats, watchers not warriors. Treaties, negotiation, conciliation, bribes where needed, information shared in many directions (another kind of bribe). An almost infinite shrewdness and caution (someone had called it a woman’s attentiveness) guided policies in the Rector’s Palace. Dubrava’s walls had never been breached by catapults or cannon, their ships in the splendid harbour never fired or sunk.”

There are also pirates from Senjan. They are very important too.

In the afterword Kay talks about how when he was on an earlier promotional tour in Croatia, his publisher suggested that he should write the book about “uskoks”. These were pirates in the Adriatic, and in this book one of the main characters, Danica Gradic, comes from Senjan. Well, she was not born in Senjan, but she came there very young with her grandfather and mother after the destruction of their village.

““It will happen,” Danica Gradek says. And then, after another silence, “Hadjuks raided and torched my village. Killed or captured almost everyone. They killed my father and my older brother, took my little brother away with them.” “Oh, Jad,” Marin says.”

Danica’s life mission becomes revenge. She is very good with bow and arrows, she is good with knives too, and she wants to be allowed to go on the raids against Hadjuks. Of course we all know how the best laid plans go and Danica indeed becomes a raider, but not against Hadjuks. Instead she becomes part of a raiding group who raids Seressa ships. Have I mentioned that Seressa really hates Senjan and wants them to go away permanently? Have I mentioned that Emperor Rodolfo supports the Senjani as his Holy Warriors? I also want to note that I wanted to like the Senjani more than I did. I get that their struggle had an ideological component too, but they often felt like hypocrites to me. At least Seressa and Dubrava’s goals were easy to understand.

But let’s go back to Danica. During the raiding of a Seressa ship she meets Marin Djivo, the younger son of a Dubrava official, and because of events that transpire during the raid Danica decides to go to Dubrava with them on the Seressa ship. We are now getting into a spoilers area so I will let you find out what happened during that raid.

You are probably wondering whether there is a love story in the book – yes, and actually two of them. As in many of Kay’s books, love stories are important but often not very visible. Danica and Marin’s is one of them. It is by no means a full blown romance – they do not spend enough time together for that, but I will tell you this – it is one that actually reminded me of genre Romance which surprised me quite a lot. But when I say *reminded* all I mean is that I saw strong romantic elements in this storyline, it is by no means a genre Romance. I did not like Danica much, but I respected her and I liked that she had a lot of agency. I adored Marin, a younger son who became unsure whether he was happy with the life he lead, life of trade and banking , but eventually found happiness and fulfillment.
There is another even more secondary love story which happens very fast – the falling in love part that is, but it was so beautifully written that I liked it despite my usual dislike of Insta!Love. The love story may be fast, but two people who end up being in love are very important for the story and have a lot of page time, they just have most of that time doing their own thing.

In fact I thought this book had much more of an ensemble cast than Kay’s other books. I know he always puts a large cast of characters in his stories, but usually we see the main ones get more page space than others. In this book the five characters mentioned in the blurb get more or less equal page time to share their POV with the readers. I will leave it up to you readers to decide whether the balancing act was achieved or not.

I will also leave it up to you to decide whether this story is about the struggles of ordinary people – my answer is yes and no. None of the main characters are that high on the class ladder. I guess one out of five was and becomes again at some point in her life, but four others really are not, even Marin is in essence a merchant, however they all seemed extraordinary to me because of the kind of people they were. At the same time, once again the book really brings home how hard it is for the ordinary folks on the background to survive the ambitions of those who are in power.
Grade: A-