Your literary novel, The Thousand Autumns of Jacob De Zoet, caught my attention because of its setting, the environs of Nagasaki in 1799-1800. I heard of the book through great word-of-mouth from people whose opinions I generally trust so I was excited to read it. 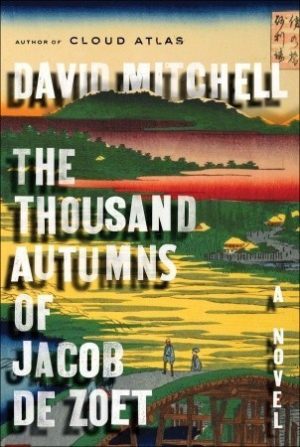 The novel begins as Jacob De Zoet, a Dutch clerk, arrives in Dejima, a tiny man-made island/trading post in Nagasaki’s harbor that foreigners to Japan aren’t allowed to venture out of. Jacob gets there after having fallen in love with Anna, a young woman from a wealthier family than his own. When he asked Anna’s father for her hand, the man suggested that Jacob join the Dutch East Indies Shipping Company to make his fortune. If in five years he has succeeded, he will be granted permission marry Anna.

Jacob is assigned by his superior, Vorstenbosch, the new chief-elect of Dejima, to help root out corruption. Jacob’s task is nigh impossible since Dejima is rife with graft and bribery. Nearly every one of his fellow Dejima residents (all male except for a Japanese mistress or two) resents him for trying and he suffers for it.

To complicate Jacob’s life further, he falls in instalove with Agawa Orito, a Japanese midwife permitted to study under Dejima’s Dutch doctor. Jacob quickly desires to make Orito his mistress. Anna told Jacob she could overlook peccadillos during Jacob’s five-year absence (men are men, after all, seems to be her attitude) as long as his heart stays hers. But Jacob’s heart quickly transfers its ownership to Orito.

It’s unlikely that Orito will agree to become Jacob’s mistress since it would lower her standing in Japanese society, and due to Jacob’s confinement in Dejima he can only communicate his attraction to her in clumsy ways, so for a long time he only loves her from afar.

I found the first third of this book incredibly frustrating. Jacob is naïve and clueless to an irksome degree. He’s also a prig. His ineptitude in social interactions doesn’t help matters. His life is one humiliating situation after another (this is undoubtedly supposed to be funny, but I never enjoy that kind of humor). The tiny setting of Dejima, which contains only two or three streets, made for a claustrophobic reading experience, though that was part of the point. So I was thoroughly bored by the first 37% of the book.

Then comes a big shift. At first I breathed a sigh of relief, but my hope for improvement didn’t last long. There are some advantages to the next 37%. The story finally spreads out to other parts of Japan and to Japanese POV characters. The characters here are more competent than Jacob and more interesting to read about than him and his fellow Dutchmen. But this section was dark. Dark, dark, dark. Sinister, horrific and creepy.

It was predictable, too – I guessed both of the novel’s biggest twists. It’s easy to do if you assume that the book will get as dark as you fear it will.

Orito is kidnapped into an isolated shrine, half malignant monastery, half very distorted convent. The women in the latter aren’t permitted to leave the building. Orito is initially drugged with an opiate but she eventually finds the strength to start spitting it out. The other women are also drugged.

The shrine serves as a kind of farm. Once a month some women are selected to be raped by the monks. They’ve convinced themselves they are willing but they don’t have much of a choice. The men’s faces are hidden from them and a different man carries out the rape on each of five consecutive nights so no one knows whose baby was fathered by whom. When the children are born, they are taken away.

Orito escapes this fate (for reasons) but she’s at the shrine to witness it for a long time. Since she’s a midwife, she helps these children come into the world and sees them taken away from their mothers, including one mother who is her good friend.

The first twist I guessed was that the babies are ritually sacrificed for a horrific religion. It turns out the children’s blood is an ingredient in an elixir the monks consume. Lord Enomoto, the head of the shrine and a powerful man, the one responsible for Orito’s kidnapping, believes the elixir confers immortality, as do his monks.

The children’s mothers have no idea; they comfort themselves by rereading joyous letters, purportedly from their children, that arrive once a year. Of course, it’s the monks who write the letters. We see one monk teach another how to write one—put in enough heartache among the joy that the letter will be believable.

Ogawa Uzaemon, a translator on Dejima, was once engaged to Orito but his parents insisted he marry another. He acceded; he is adopted so he felt he owed them that. But Uzaemon still loves Orito and when he learns about life inside the shrine through a smuggled scroll, he decides to rescue her. He seeks out Shuzai, his former sword master, in secret, and Shuzai devises a plan for rescuing Orito. Uzaemon accompanies Shuzai and hired mercenaries on the rescue mission.

Here is the second twist I guessed—Shuzai betrays Uzaemon, conning him all along, taking him to the shrine to bring him to Lord Enomoto so that Lord Enomoto can (A) get his hands on the scroll and (B), kill Uzaemon so he won’t tell anyone else the truth. Uzaemon is indeed murdered.

Eventually Lord Enomoto’s shrine scheme comes to an end, but given how dark everything else about the shrine part of the plot is, this resolution feels tacked on, almost part of a different novel. And it doesn’t restore the murdered babies or the years of being locked up, raped and impregnated to the women.

The book also contained descriptions of bodily functions and other gross things like maggots and people who smear their snot on something after they pick their noses. The syntax was somewhat repetitive and I got tired of it after a while.

Another thing that bothered me: We get a strong chapter and in the POV of Weh, a Dejima slave, so I expected Weh to play a significant role later. But no, that was it; one good chapter about him, an internal monologue that depicts his life as a slave, his pre-capture past and how hard he fights to hold on to his sense of self in the face of multiple degradations and injustices—and then it goes absolutely nowhere. We never get back to his viewpoint nor does Weh have impact on the rest of the plot, even though all the other POV characters do.

There were a few things I liked. The novel has a nice motif of storytelling where the men on Dejima share stories of their pasts. One of the prominent side characters, Dejima’s quirky Dr. Marinus, entertained me. The book is immersive and focuses on a corner of the turn of the 18th century that I never gave much thought to—the Dutch trade with Japan. Most of the last quarter is an improvement over the rest.

But I was so repulsed and depressed by large parts of the story that these things were hard to appreciate. If I hadn’t been forced to read this book for my book club, I would have quit somewhere in the first third. Grade: F/D.