I enjoyed Zen Cho’s two books in her Sorcerer Royal series, with their lovable characters, whimsy, humor, and Heyer homages, so when I saw she had a fantasy novel set in modern-day Malaysia coming out, one that was initially billed as a third installment, I jumped on Black Water Sister. 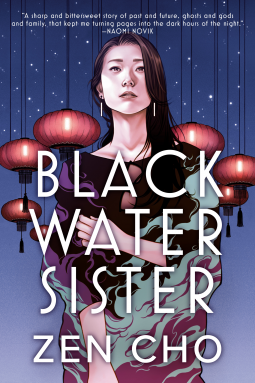 I’m going to crib the plot summary from Jayne’s review:

The start of the novel is a bit confusing as there is a lot going on. Jess and her parents have moved back to Malaysia from the US after her dad lost his job, partly due to the cancer treatment he had. They’ve moved in with his younger sister and her husband, relatives have descended on them, and Jess is surrounded by uncles and aunties all talking about her and what she should do with her life. Various tensions make things more difficult as Jess wonders what she’s going to do with her life now and how she’ll keep up her romantic relationship. She’s not out to her parents and worries about how they will react when they learn of her sexual orientation.

And then she begins to hear a voice that sounds as if it’s near her or sometimes in her head. Yeah, that scares her. Turns out her dead grandmother has a revenge plan she needs Jess to help her with. Their family appears to have a talent as mediums for various gods and now that Ah Ma is dead, the god Ah Ma worked for is looking for another body to use as well as perpetually being mad as hell.

Jess is a recent Harvard graduate but she is now rudderless and hasn’t gotten a job yet, so when Ah Ma’s ghost takes over her nighttime consciousness, she is unconfident and uncertain what to do. It’s clear that Ah Ma (the grandmother Jess’s mother was estranged from and whom Jess consequently knows little about) wants revenge on the contractor/gangster who is trying to develop the land currently used as the outdoor temple where Ah Ma, her son (Jess’s uncle), and their friends have for years worshiped a dangerous goddess (the titular Black Water Sister). But what exactly that revenge plan does not become apparent for a while.

It was when the plan came out that I realized that Ah Ma and her allies are no better than their opponents and willing to go to any lengths, including using and betraying Jess, to gain their goal. That was also when I lost interest in reading further. The humor and potential for camaraderie in Jess’s relationship with her late grandmother were no longer in play. I felt an intense dislike for Ah Ma and her gang.

I didn’t like most of the characters involved in the main plot (some of the secondary characters, like Jess’s parents, were sympathetic enough, but I can’t say I felt invested in them). I did care about Jess but she was passive and I wanted her to have more initiative. I’m guessing she develops some later in the book but the hints at that weren’t enough to keep me reading.

A big part of the problem was my expectations—I thought this would be funnier and more like Sorcerer to the Crown and The True Queen in tone, so it was a rude awakening to realize that this book was darker. Much, much darker. I wasn’t prepared for it so I recoiled from some of what happened to Jess.

There was also a chaotic, out-of-control tone to the book that I didn’t care for. The Sorcerer Royal books also have a chaotic feel, but it fits the zany absurdities in that series better than it does in this context.

The things I liked best about the book were the depictions of the Malaysian setting, culture and folklore, and the immigrant experience. I could relate (so much!) to what Jess experienced as a new transplant in a foreign country. I loved reading about her paternal uncles and aunties, not so much because I loved them as people (although they weren’t bad) but because they were interesting, distinct, and conveyed things about Malaysian society and culture. I felt immersed in Jess’s large family. The sense of place was phenomenal; sweat almost dripped off my skin as I read about Malaysia’s humidity and sweltering heat.

This Harlequin Historical Regency romance was recommended on my Goodreads timeline. Jane Bailey is the granddaughter of a wealthy gentleman. Her father, the man’s only son, married her mother, a servant, and was disowned because of it. Jane’s father died during her childhood. To survive, Jane and her mother became servants when Jane was still a girl. They are now lady’s maid and housekeeper. 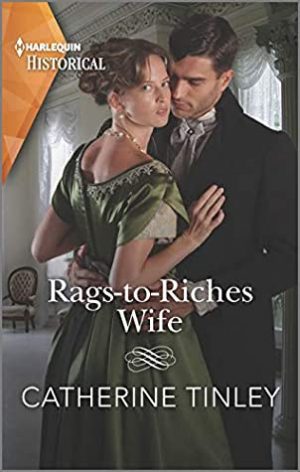 Jane’s now-frail grandfather, Mr. Millthorpe, wants to meet her before he dies, and he sends Robert Kendal, his grand-nephew by his marriage to his second wife (his first wife was Jane’s grandmother), to find Jane and bring her to him in Yorkshire for a couple of weeks.

He doesn’t tell Robert what his relationship to Jane is but since Jane has a different surname (her father took his mother’s maiden name in defiance of Mr. Millthorpe), Robert thinks she must be the daughter of an illegitimate child his grand-uncle had while sowing wild oats. Jane doesn’t enlighten him on their journey, either. Her mother warned her to keep her counsel on this topic since he’s a stranger.

The secrecy over Jane’s identity was the most irritating aspect of the book. Even after they become friends (during their journey) and Jane trusts Robert, she decides she shouldn’t tell him about her father’s estrangement from her grandfather (Robert’s grand-uncle) because it feels disloyal to her father. You would think Robert, given his attraction and admiration for her, would be curious enough to ask her about it. But no, he’s “content to wait to learn what his uncle’s reasons were for summoning her.”

When Jane reunites with her grandfather, everyone continues to think that she’s the child of the man’s by-blow because her grandfather keeps quiet on the topic for a long while. A very long while, and despite more having multiple reasons to clear this up.

This setup is a tortured contrivance—there is no reason for Jane’s birth to be kept secret for so long. Almost every reason given for it makes no sense, and it’s obvious that it’s there to postpone the big reveal until the denouement.

It’s also weird that Jane, her employer, and her protective mother would all agree for Jane to go with Robert without knowing him and having only his word for it that he is related to Jane’s grandfather and her grandfather wants to see her although he (Robert) doesn’t know why. Basically, this book is full of plot holes.

Robert and Jane fall in love on their way to Yorkshire (once they arrive at her grandfather’s house, there’s someone else to contend with). They are both have honorable, kind, and (in Jane’s case especially) gentle characters and demeanors, but think that a union between them can never be because of her station. Neither of them expects her to ever be anything other than a servant.

Once they reach Robert’s home (he lives with her grandfather) this impression persists. It’s not until well into the second half that Jane finally begins to catch on to the possibility that her future may be a little more secure and not a life of servitude.

Jane’s thoughts about how once this visit was over she would go back to being a servant got tiresome after a while. Her grandfather was frail, elderly, and he’d sought her out, so the idea that he might have a different future in mind for her should have had more prominence in her thoughts.

Jane’s utter humbleness and constant reminders to herself about her station and place began to seem like self-abnegation after a while and they got irritating. I felt that they imbued the novel with the worldview that it would be unseemly for female servants to dream of rising in the world, though that is probably not what Tinley intended.

Some of the internal first-person monologues annoyed me because they didn’t reveal anything new and only made explicit things that were already obvious.

I liked the main characters (Robert more than Jane) and the book kept me turning the pages to see everyone’s reaction when the truth came out, but it’s not my cup of tea. If my library loan had expired and I’d had to return it unfinished it wouldn’t have bothered me. C/C-.

→ Janine
Previous article: REVIEW: The Chosen and the Beautiful by Nghi Vo
Next Post: REVIEW: The Menopause Manifesto by Dr. Jen Gunter