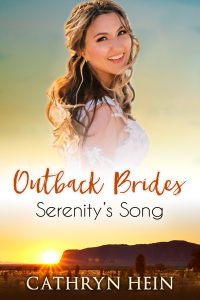 He’s got a history of bad decisions—is he finally about to make the right one?

Jesse Hargraves can’t outrun his notorious bad boy reputation. Betrayed by a woman he trusted, he retreats to his hometown, Wirralong, to serve as his brother’s best man and rebuild his life. But change isn’t easy, and it’s even harder when Jesse has to fight his fierce attraction to the maid of honour—a woman well aware of the darkness in his past.

Beautician Serenity Strachan’s flippant one-liners and vibrant hair colours are armour to protect her fragile heart. She’s always crushed on Jesse, but she’s determined to keep him and his sordid past at an arm’s length. That’s easier said than done when Jesse asks Serenity to help renovate an old property. And when they’re trapped underground in a tunnel cave-in, their emotional barriers fall faster than the tunnel walls.

When rescue arrives, they question their new emotional intimacy. Can Serenity trust this new Jesse with her heart? And can Jesse trust that Serenity will ignore the lure of a fortune to keep his secrets safe?

I’ll be honest and admit the beautician with vibrant hair mentioned in the blurb made me want to try this book. Why? I guess I’m tired of cupcake shop owners or dog walkers. I needed something different. I started the book feeling as if I were unsuccessfully trying to catch up with the events of “Elsa’s Stand.” But the two or three attempts to get me up to speed didn’t work. This book just really does not stand on its own.

The first scene shows Jesse as a man with Something Angsty going on and I felt a degree of sympathy for a man who’d been done wrong. The blurb mentions his “bad boy” past and I thought it would be the standard playboy – perhaps with overtones of being misunderstood. Then Jesse proceeds to act like a dick for the next few times he appears plus there are hints that he has past drug use. The “not-meet-cute” reintroduction with Serenity goes, of course, terribly wrong and ends with Jesse telling off an older man (who is supposed to be a busybody which I guess makes this okay? Not.) It takes a while for him to begin to not act like a dick all the time.

Serenity first appears on page as a responsible business owner and good friend. Then she gets splashed with an avalanche of cold water (admittedly no fun) and seems to lose her ever lovin’ mind. Spitfire is one thing. Raging Termagant is another and Serenity rockets over the line between them by kicking Jesse’s ute and throwing her own supplies at him. She’s not exactly the sensible business woman I was hoping for.

The two of them then proceed to act like stroppy teens having tantrums. But since it must be love, Serenity’s BFF and Jesse’s soon to be sister-in-law Elsa naturally tries to toss them together. Which allows Jesse to cheerfully goad Serenity into doing something stupid with him mainly because he’s being a lad. At least the dick immediately realizes he was stupid and at fault. The fact that he’s almost got them killed might have clued him in.

But I kept reading hoping that common sense would rear its head. It sort of did but the book settled into a slog through chapters of them trapped underground. I began to feel as trapped as they were. My patience finally wore out and I flipped forward to discover that much of the rest of the book would be taken up by the wedding of Elsa and Jack – Jesse’s brother. Since I hadn’t read their book and neither of them had made much impression on me, frankly I wasn’t interested. After an excellent start to the series with Kelly Hunter’s book, this one sadly is a DNF.