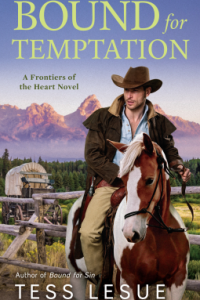 Bound for Temptation by Tess LeSue

Having survived the Oregon Trail, Emma Palmer is ready for a fresh start, even if it costs her all the gold in California.

Emma Palmer has had many jobs and has gone by even more names, but most recently she is known as Seline, madam of her own establishment. Her place is clean, her booze is cheap and her bedrooms are fancy. But when a would-be patron won’t take no for an answer, she is forced to don a new disguise and flee for her life. While the schemes she cooks up might seem outrageous to an outsider, they haven’t failed her yet.

Tom Slater is a taciturn cattleman at the tail end of a long, hard season on the trail. He’s looking forward to a quiet winter at his old family homestead in Mexico. What he doesn’t plan on is escorting a group of women on the run to safety south of the border. Tom doesn’t need to be a trailsman to know that the woman with the sly, green eyes—the one he can’t keep out of his thoughts—will only lead to trouble.

This is not a book that a newcomer to the series can just jump in and start reading without feeling totally lost for the first few chapters. After a while, I stopped trying to keep anyone straight. Though the premise is interesting – a madam seeks to escape a cruel man who wants to own her – Emma herself soon passes into unbelievable territory with her constant lies to hide her background from the hero. After a while, I couldn’t swallow that Tom would continue to think her a nun. Still the book was amusing and the sexual tension kept building.

Then a few things happened that made me stop reading. The group finds themselves in the company of two obvious villains who clearly show they have no regard for women. And Emma, who has been used and abused by men for years gets conflicted at these men being punished. No, they hadn’t done anything to her – yet – but obviously wouldn’t have hesitated. Nope, even thought I guess this was to show how noble Emma remains, I didn’t buy it. At the same time, Emma and her fellow prostitute who is also pretending to be a nun along with the others stay at the home of a (presumably) devout Catholic family who don’t appear to notice that Emma has no knowledge of how to be a nun. What??

Oh and there’s the ick factor of Emma having slept with the hero’s brother.

After reading other reviews, I see that I missed something at the end that bothered them namely why Emma would do something that would call attention to her former profession. I think if the book had either stayed light and fun or focused totally on the series and dark side of some of the issues raised, it might have worked better for me but the wild swings between the two just didn’t. DNF The Ape that Understood the Universe by Steve Stewart-Williams

The Ape that Understood the Universe is the story of the strangest animal in the world: the human animal. It opens with a question: How would an alien scientist view our species? What would it make of our sex differences, our sexual behavior, our child-rearing patterns, our moral codes, our religions, languages, and science? The book tackles these issues by drawing on ideas from two major schools of thought: evolutionary psychology and cultural evolutionary theory. The guiding assumption is that humans are animals, and that like all animals, we evolved to pass on our genes. At some point, however, we also evolved the capacity for culture – and from that moment, culture began evolving in its own right. This transformed us from a mere ape into an ape capable of reshaping the planet, travelling to other worlds, and understanding the vast universe of which we’re but a tiny, fleeting fragment.

The catchy title did get my attention and the description sold me on wanting to try the book. The first two chapters were interesting but during the third, the book started drifting and I began to lose interest as the author hammered home his point and droned on and on. A sharper focus and less rambling were needed. DNF The Hourglass by Liz Heron

Spring 2000. Paul Geddes visits Venice to research the fin-de-siècle opera singer, Esme Maguire, seeking out a cache of papers held by Eva Forrest, the widow of a collector. What he reads begins in the 1680s, moving through the city’s later history of Enlightenment and Revolution, describing a life stretched beyond human possibilities.

She travels across Europe to sing in Regency London and Edinburgh, then Belle Epoque Paris, always returning to Venice, its shadows and its luminosity, its changes and its permanence.

What would it be like to live for nearly 300 years, as an exceptional being who must renew herself time after time, as those she has loved age and die? Could this story be grounded in reality or be merely the product of an ageing woman’s delusion, as Paul suspects.

Warily, Eva and Paul fall in love, their tentative emotions bringing them closer until, on a trip to the Dolomites, Eva’s past catches up with her.

Oh this cover, this cover. I loved it and wanted so much to love the book. For the first 3/4 of this book, I was loving it. Venice was a character in its own right and a wonderful one. The historical parts were fascinating and the modern ones intriguing. Who was this woman and was Paul speaking with and interacting with a woman now 300 years old? Alas, the final section of the book crashed on my head and ruined everything that went before. Besides having the fantastical illusion shattered, I didn’t buy the too quick romance wrap up of the story. It was like anticipating Christmas and then getting a lump of coal instead.B/D 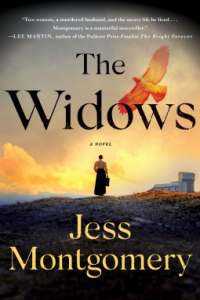 The Widows by Jess Montgomery

Kinship, Ohio, 1924: When Lily Ross learns that her husband, Daniel Ross, the town’s widely respected sheriff, is killed while transporting a prisoner, she is devastated and vows to avenge his death.

Hours after his funeral, a stranger appears at her door. Marvena Whitcomb, a coal miner’s widow, is unaware that Daniel has died, and begs to speak with him about her missing daughter.

From miles away but worlds apart, Lily and Marvena’s lives collide as they realize that Daniel was not the man that either of them believed him to be—and that his murder is far more complex than either of them could have imagined.

Inspired by the true story of Ohio’s first female sheriff, this is a powerful debut about two women’s search for justice as they take on the corruption at the heart of their community.

When I read the blurb for this book, I immediately knew I wanted to read it. It’s technically well written and packed with historical details that put you right into the scene. But for some reason, I just never was truly engaged with what was happening on the page. The pace is leisurely – slow, even – and it takes a while for the story to get going. There are also flashbacks that interrupt the narrative. I also immediately guessed who the villains were. In the end, I’m afraid that I found it difficult to maintain interest and only limped along to the end so I could finish it in order to write a review. For those who doubt the brutal existence of coal miners and their families or the long standing fight with mine owners, I would suggest watching the 1976 documentary “Harlan County, USA” about the 1973 miner strike in Kentucky.

→ Jayne
Previous article: REVIEW: A Touch of a Brogue by Christine Danse
Next Post: REVIEW: Game On by Kelly Jamieson