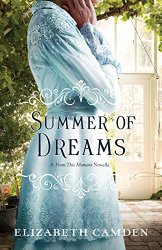 The daughter of a powerful army general, Evelyn White vows she will never marry a man in uniform. Which is why Clyde Baxter, a West Point cadet on the verge of graduation, presents a problem. Their attraction is instantaneous, but it threatens Evelyn’s lifelong dream of going to college.

Clyde’s brilliance in the new field of electrical power has him poised for a promising career in the Army’s Corps of Engineers. The one thing he never anticipated was Evelyn White, a woman whose soaring ambition matches his own.

As they fall in love over the course of one magical summer, they believe dreams are enough to weather any challenge. But when they are tested by forces neither saw coming, will the fragile bonds forged during those dream-filled summer days be strong enough to survive the storm?

When I saw this free novella that leads into your next novel, I said why not. It promised a hero who falls for his heroine straight off and a heroine who desperately wants to go to college. But right from the start, I wondered about Clyde.

Clyde is a West Point cadet hero with lots of demerits. In fact, enough to get him expelled if he can’t work them off. It’s not that Clyde is a slacker – in fact he’s brilliant. He just started from his plebe year doing pranks mostly just to show that he could do these things. I’m all for fun and games but so much of this novella is devoted to Clyde’s history, how he begged his way to an appointment, needs the education he’ll get there to save his poor, starving mother left to wash clothes after his father died leaving the family to pay off massive debts that I would think he’d be anal about staying on the right side of being kicked out.

Once he sees Evelyn, he’s smitten and even if this wouldn’t knock off enough demerits to give him some breathing room, he would be determined to help her with her project. He immediately knows that smart, engineering savvy Evelyn is the woman for him. They both love a good challenge, tinkering with things and working out problems. Still, Clyde will have to work hard to change Evelyn’s opinion on marrying an Army man.

Evelyn, on the other hand, wants nothing to do with Clyde beyond the summer of getting her greenhouse hydraulic pump set up. She hopes that by getting it to work, she can change her father’s mind about paying for her to go to college. She might enjoy Clyde’s company and being around something who shares her love of engineering but she’s lived an unsettled life with her father gone all the time and wants nothing to do with that for her children.

Her cousin seems to want to do bizarre things like recreate the Hanging Gardens of Babylon in upstate NY or build a koi pond merely for the novelty of it. It dawned on me before it seemed to dawn on them that this greenhouse was going to be abandoned for the winter and then what happens to all these plants and animals. Lots of (frankly) tedious time is spent on the greenhouse, the pump, building terraces, stocking koi and other things.

Clyde’s plans turn to ash after a “detour” from campus lands him with more demerits than he could ever work off before graduation. But he knows that what he did for a friend was worth it. Honestly, I’m not so sure. Much is made about the nobility of sacrificing for a friend but Evelyn’s cousin basically threw his semester classwork down the crapper in a drunken funk. With all the repetition about how Clyde needs this degree and chance in the Army in order to support his mother, get rich, and hopefully marry Evelyn, he blows off his whole future career very easily. I was also disappointed about how Evelyn’s hopes are left at the end of the story.

Then there’s the feeling that a whole lot more in this novella is about Clyde’s hopes and dreams and Evelyn’s hopes and dreams but not a great deal about any of their hopes and dreams until fairly near the end. There’s a rush of relationship at the end as Clyde and Evelyn finally work out their lives and jump into their future with fingers crossed but I wanted more in the body of the story and more responsibility from Clyde. D