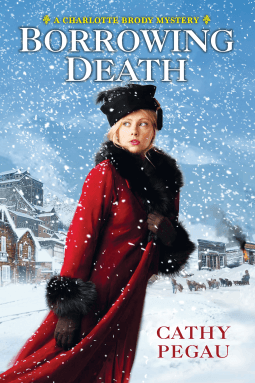 Suffragette and journalist Charlotte Brody is bracing herself for her first winter in the frontier town of Cordova in the Alaska Territory. But the chilling murder of a local store owner is what really makes her blood run cold. . .

After three months in Cordova, Charlotte is getting accustomed to frontier life. She is filing articles for the local paper–including a provocative editorial against Prohibition–and enjoying a reunion with her brother Michael, the town doctor and coroner. Michael’s services are soon called upon when a fire claims the life of hardware store owner Lyle Fiske. A frontier firebug is suspected of arson, but when Michael determines Fiske was stabbed before his store was set ablaze, the town of Cordova has another murder to solve.

Her journalist’s curiosity whetted, Charlotte begins to sort through the smoldering ruins of Lyle Fiske’s life, only to discover any number of people who might have wanted him dead. As the days grow shorter, Charlotte’s investigation turns increasingly complex. She may be distant from the trappings of civilization, but untangling the motives for murder will require plumbing the very depths of Charlotte’s investigative acumen. . .

WARNING – The main character has elected to have an abortion in the past.

While this is more of a murder/mystery series, there is a romantic thread running through it. “Borrowing Death” opens with a scene showing us that journalist and suffragette Charlotte Brody is still happily throwing gasoline on the fires of Cordova, Alaska with her pointed newspaper articles – this time against the Eighteenth Amendment which is about to be enacted. While she’s finishing up the next day’s edition of the paper, a fire breaks out which quickly goes beyond arson to murder as confirmed by the autopsy done by her brother Michael, the town doctor, and the murder weapons found near the body by Deputy James Eddington, with whom Charlotte has begun a tentative relationship.

Charlotte begins her investigation much to James’ annoyance at times. The dead man’s boring wake yields a few clues and possible suspects. That is before Charlotte is caught red-handed snooping for information. A visit from the local madame and one of her sporting girls reveals a few other things about the murdered man. It’s a good thing Charlotte has made friends with Brigit as she’s turning out to be a gold mine of information during investigations. As with the first story, suspects and motives are everywhere. But which are meaningless and which might lead to murder?

Charlotte is very easily able to justify almost anything she feels she needs to do to further her investigation. It does get the story told but I’m not sure I’d want her as a neighbor. I wasn’t surprised when she gets served a bowl of just deserts in jail. Still, she just can’t keep herself from continuing to stick her nose into dangerous situations.

The period stuff is good with references to rest of US as the “States,” the difficulty in transporting goods and services up there and cost involved and the looming Volstead Act. Charlotte also comes up against some of the casual racism the area has for Natives and sees why the murder victim might have done a few things he did. One thing which readers might want to consider is Charlotte’s personal history which lead her to Alaska and how this choice women faced impacts others in the book. See the warning above. We also learn that Nellie Bly was Charlotte’s heroine while growing up. With that kind of inspiration, I guess it isn’t surprising that Charlotte is a crusader for truth no matter the cost. Now if she can get to the point where she’s ready to be as honest with James as he’s finally been with her …

The solution to this murder did catch me off guard despite a few clues scattered through the story. It also seemed like there was another plot thread which involved the dead man’s widow that wasn’t totally explained plus there is another issue regarding one of Charlotte’s friends hanging loose. Perhaps these will be tidied up in the next book along with perhaps a bit more between James and Charlotte. Poor man finally appears to be catching on that Charlotte is indeed a very different kind of women. B-