REVIEW: Return of the Viking Warrior by Michelle Styles 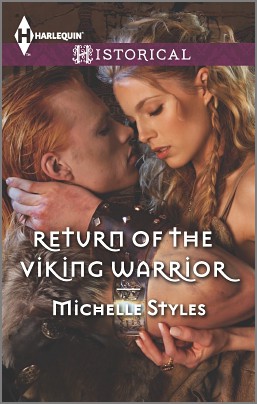 The Viking Claims his Wife

Kara Olofdottar thanked the gods when she married her childhood hero Ash Hringson. But this fearless raider has been gone so long, his proud arrogance is the only memory she retains of him. Now she must remarry to protect her lands for her son.

But then, on her wedding day, the conquering warrior returns to gasps of horror and surprise! After all, Ash was supposed to be dead, though to Kara’s starved gaze he seems very much flesh and blood…and less than impressed to find his beautiful wife intent on marrying someone else!

Recently Robin mentioned a new exhibit at the British Museum about Vikings and how it confounds so much of what we think about them today. When I saw your latest book listed at Harlequin I took it as a Sign and hustled to buy and read it. I should have enjoyed this different take on life in 790s Norway. Let’s just say, I didn’t.

Ash and Kara have a lot going on. Ash headed off years ago to seek Adventure and Riches leaving his (unknown to him) pregnant bride to face life with his horrible father. But Kara survived, bore a son, defended him against those who would have exposed the weak baby and now seeks a second marriage with a steady man who will defend her and her son and protect her son’s land. Until Ash arrives just at that moment in a wedding when the question is asked, “Does anyone know why this marriage can’t take place.” Ash unloads a hell of a reason, the ceremony comes to a crashing halt and the wedding feast is hastily renamed a homecoming party.

But Ash’s Uncle wants the land and sulks offstage after uttering threats. Ash and Kara hiss at each other, grind their teeth over the situation and huff around a lot. They talk, they talk, they talk, they argue in undertones, slam their own fists together a lot and then argue in hushed tones some more. They can think a situation to death and strive to repress what they’re thinking until they’ve stood and thought about it a few more times. The plot moves at a glacial pace as these two manage to do very little over the course of the first 80% of the book. Yes, I calculated that.

Every once in a while, the evil Uncle gets a brief mention just so I don’t forget he and his threat exists but basically there’s a lot of very little actually happening to keep me awake. Until finally! Uncle makes his move and I think, “Yippee, some action.” Only there isn’t. Action that is. Just more talking. No, wait… yes a battle! Fighting with swords at last. Alas, that bit of excitement is over too soon and we’re back to Kara and Ash fussing over patching up Ash’s wounds. Sigh… The story ends with more talking and I finish it with the thought that if you’re looking for a verbose, moody Viking novel this is it. If you want some excitement though, keep going. D