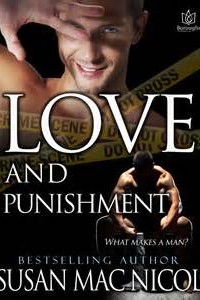 On the search for a serial killer, Detective Anthony Parglietto and Flynn Parker learn that every man must make a choice: to kill, to live, to love.
FROM DARKNESS
AND LIGHT
Someone is leaving a trail of bodies throughout London, and Detective Anthony Parglietto is determined to end the violence. Then he’ll return to the man he loves.
Tough, street-savvy, and used to dealing with lowlifes, Flynn Parker is the last person Anthony thinks he has to protect. Then the Bow-Tie Killer strikes close to home and the world turns upside down. Right is wrong, black is white, and a policeman might become a monster. But in the name of love, justice must be served. In the name of love, pain can be endured. In the name of love, a man can taste the very essence that defines him.

I have wanted to try your writing for a while and decided that this mystery would be a good way to start. Let’s just say that I am not sure whether I want to try anything else written by you.

First and foremost, the book turned out to be not what I wanted to read – *at all*. My expectations however were not formed out of thin air. Amazon classified this book under “mystery, thriller and suspense,” and while I can see how this can be called “thriller and suspense”, I wanted to read a book which would be a mystery too. A story where the killer is revealed to the reader at about the 20% mark is not a mystery as far as I am concerned. Based on the blurb I definitely expected some violence – books with serial killers in them usually have violence, after all, and for the sake of the story I was prepared to read it. However, the killer’s shenanigans were described in such  detail, that I felt like I wanted to throw up once or twice. If you have triggers for physical and sexual violence, beware. Beware!

We meet Flynn when he is kidnapped by the maniacal “Bow Tie Killer”. Apparently Flynn’s boyfriend Anthony is investigating a string of murders (at the beginning of the story they seem to believe it is only two murders so far, however it turns out eventually that it was more than that). The killer does some threatening, some assaulting and eventually drops Flynn off drugged and bloodied close enough for him to walk home, but just barely. It is pretty obvious that Bow Tie Killer AKA BTK (this is how he is often referred to in the story) has something personal against Flynn’s boyfriend, and he wants Anthony to see what he is capable of and how close he can get to the people Anthony loves.

Flynn apparently got off pretty easily, in the sense that he was not raped, but “just” assaulted, threatened, and drugged. Of course he is still in physical and emotional pain, and he has to go to the hospital, but soon he is out and he and Anthony are having sex (I was confused about the timeline, but I think a day or two had passed after his assault). An assault victim having healing sex usually upsets me, but here I just shook my head, because the book was starting to beat me over the head with something that upset me far more.
You see, our Anthony is a “retributivist”. He believes the punishment should fit the crime and therefore criminals who kill should be killed.

“Graham leaned forward. “Our Anthony here is a retributivist. He believes the punishment should fit the crime and he says so rather vocally at any chance he gets.” The pathologist grinned. “It makes for an interesting discussion at the station when you have a bunch of policemen and lawyers in the same room. It could be very entertaining.”

Anthony raised a rude middle finger at his friend who laughed loudly. Flynn sat forward, still hoping to stop the train.
“Does anyone want dessert? I saw some lovely looking cheesecake on the cake stand earlier–“
“I believe criminals who kill should in turn be killed,” Anthony said, interrupting his lover softly. “It’s the only way they can really pay for their crimes and the only way people can be safe. Why house these people at taxpayers’ expense in places where they simply develop their own hierarchy and kingdoms and where punishment simply becomes a byword? Instead they create their own little world inside the prison, their own rules and just live out whatever time they have inside in making other people’s lives a misery to enrich themselves. Then they get released after some bunny-hugging do-gooder decides the buggers have had enough. I don’t call that justice of any sort for the victims or their families.
*****
“But what about their human rights—” Judy’s question was rudely interrupted as Flynn’s heart sank. Graham laughed explosively.
“Jesus, now you’ll really get him going, Judes. My God, you couldn’t have picked a better turn of phrase to set him off.”
“I’d like to hear Anthony’s views.” Judy said quietly.
Anthony sat back. “It’s pretty simple really. I don’t believe that being born human being makes you a human being. I believe you have to earn that right. Compassion, sympathy, empathy and love. These emotions all make us human beings. And if at any time you lose them and take life or dignity away from another person, you forego your right to be seen as one”

And he does not even say – serial killers who do monstrous things should be killed. Nope. According to Anthony, if you kill once – you should be killed in response. And apparently Anthony is quite comfortable with being judge, jury and, executioner, all in one.

It seems as if Anthony can get going on this topic at any time, and everybody at the police station knows his views. His sergeant usually clashes with him because he is a religious, self-righteous type who thinks that the police should not be killing people before they get to court. So Anthony works this case, because he is the best, or one of the best detectives in the station and he is quite comfortable with wanting to kill BTK because he does not want to have any more deaths on his conscience. Right.

And then the case becomes more and more personal for Anthony – it is clear that the killer (whose identity the readers have known for a while now, let’s not forget that) has some personal score to settle with him. Besides assaulting Flynt, the killer is revealed to have a connection with another death which took place in Anthony’s family.

Do you think Anthony is taking himself off the case? Do you think his Boss is taking him off the case? Well, to be fair his Boss thinks about it, but he does not do anything until the sergeant complains and we can’t have that. Anthony’s objectivity could be compromised? That’s silly talk. But then Anthony can’t be taken off the case because something heats up again and he and only he can handle it. I will leave it to your imagination as to what he did to the killer.

I also want to say this – when I read the book, I never assume that the author shares the views of the characters. Of course authors put a little bit of themselves in their characters, but I always think that relationship between fiction and reality is more complex than a straight reflection.

In this case, though, in an author’s note at the end, the author says that she does share Anthony’s views, so I think she opens the door to my final observation. I did not feel that Anthony was making organic decisions throughout the book; it felt more like author created a mouthpiece for a vigilante-justice philosophy and then devised a plot to justify it. What moral dilemmas did Anthony face exactly? Grey areas? The killer was a true monster; can we really have a debate about whether he deserves to live when he behaves worse than an animal and does not have a touch of humanity in him? It just felt so easy, predictable and boring.