REVIEW: Home is the Hunter by Helen MacInnes 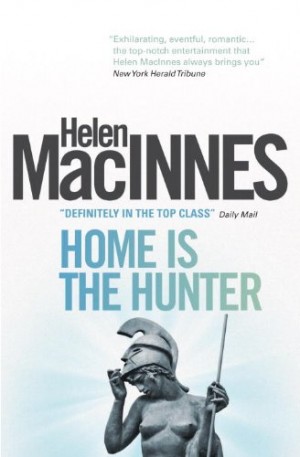 After years of war and still more years of travelling, Ulysses finally returns to his beloved Ithaca, penniless and alone. Rather than the joyous welcome he had hoped for, he finds his palace full of quarrelling suitors, all scheming to possess his wife and his land. Meanwhile the beautiful Penelope is speculating on why it should take any man seven years to get home. As the couple find their way back to each other, Homer becomes increasingly irritated that they are not adhering to the plot of his new book, and Athena, the Goddess of Reason, has had enough of irrational mortal behavior.

After reading Sunita’s recent review of Helen MacInnes’ book “Rest and Be Thankful,” I decided to give this author another try. This book sounded different and since I enjoyed reading “The Odyssey,” I “one clicked” it. “Home is for the Hunter” is written as a play complete with stage directions. The feel isn’t too modern but it’s also definitely not trying for period.

Finally Penelope gets to air her worries and grievances at being left for seven more years after the end of the Trojan War and having to deal with the violent suitors scheming for her hand. Why seven years and not the standard ten of the Odyssey? That part was never clear. I like that Penelope’s intelligence in holding off the suitors via vows to Athena and food management (yes) gets duly noted and lauded as well as her wisdom as she tries to raise their son alone.

Meanwhile Odysseus – or Ulysses as he’s often called – shows the typical man’s view of things by first being annoyed that he can’t just waltz into his home and everything be waiting for him as he expected and wanted it to be complete with slippers and pipe by the fire. Much less that he realize that it was his wanderings that caused it all and left Penelope and his too young son to deal with the suitors.

Penelope is at first overjoyed that her beloved husband is home yet soon this changes just a little as she thinks about it and gets miffed. Is Odysseus home because he loves her or is he just tired of travel and she’s nice to settle down with? She wants the love and longing to go both ways. She’s tired of being seen by friends and family as the nice, patient, long suffering Penelope. Even in the early verses of the Odyssey Homer has boxed her into this role. She also wants a little revenge against three years of hell from the suitors. Penelope really comes alive as flesh and blood and not a spineless ninny. She even makes Odysseus admit his fault and culpability for the current situation.

Sticklers might not like it but I enjoyed the addition of Homer to the actual tale. He’s a bit annoyed that some of his details – about which he’s already written some verses – are wrong and tries to cajole Penelope into taking up weaving instead of embroidery. Still he has his integrity and would never dictate that his pupils use any of the nice little snatches of verse he chooses not to include in the poem. Watch for some of the ones that he sends back into the poetic stratosphere for future writers to make use of.

So the ending isn’t quite how it’s come down to us in the poem but the way that Odysseus uses his brains and directs his few troops are just as impressive. As he tells Telemachus, it’s not just might that wins the war. If Homer is told, or chooses to tell, a different ending than what actually happened? Well, as the Goddess Athena tells us, the end is the same – all is well, Penelope has her love back and their story will be told for thousands of years. B