I bought this after reading Club Justice and unfortunately it didn’t leave a very positive taste in behind. While Club Justice was flawed, the interesting storyline and voice powered over those issues. In this book, the very thin plot was beset by misogyny, casual racism, and poor storytelling. 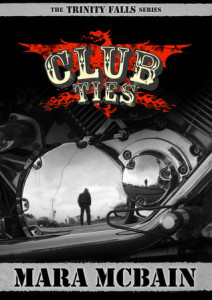 Mox and his brother, Rhys, are moving out of their parents’ home and into an apartment above the restaurant bar owned by their parents, Zeke and Ginny. They are supposed to be establishing themselves as full fledged members of the Lords 0f Mayhem as well as responsible adults.

Mox finds a waif and decides to adopt her like a stray puppy, only this stray puppy falls in love with him over the course of about 48 hours and jumps into bed with him despite having been kept as a sex slave by a crazy mob boss. Eva ran away from Rocco, an insane mob boss, who has beat her and raped her repeatedly.  Mox takes her to his new apartment that he shares with Rhys and two fall in love and lust immediately.

The intended effect of Eva’s trauma is diminished.  It’s hard to believe that she is a cowed and abused girl who is frightened of Mox’s size when she is giggling over his serious threat that he’ll warm her ass if she scares him again.

“I promise you if I can’t control my temper I will walk away until I can, and then we’ll deal with it.”

“And then what?” she asked. As much as she didn’t want to know the answer to that, the unknown was far more frightening.

Mox sighed, the sound harsh in the quiet room.

Spanking is a remedy his brutish father figure teaches him.  Later we are treated to a scene where Zeke spanks Ginny, his wife, after they’ve had sex because she didn’t call him and drove in bad weather.

I wanted to like Mox, a guy portrayed as uncomfortable with his large size and feeling like a sidekick to Rhys, the beautiful son of the “King and Queen” of the Lords of Mayhem.  His portrayal as a socially inept, blushing young man and who was driven crazy with lust by the small delicate young woman he found was convincing.  But this believability was eroded by the insta love  the stereotypical villain storyline.

The plot involving Eva’s ex lurched forward unevenly and while I enjoyed revisiting the members of the Lords of Mayhem, the dual storylines involving the Lords and Eva’s past didn’t gel as well in this book.  The coincidences seemed particularly contrived.  Further the set ups for future books were all too obvious and weren’t well integrated into the existing stories making them stand out as clear sequel bait.  While there were no rapes as there were in the previous book, we are treated to graphic scenes of the bad guy treating women in vile, horrible ways.  I’m still unsure what the purpose of those scenes are.

There were frequent in paragraph head hopping and repetitive storytelling.  The relationship dynamic between Eva and Mox was overly similar to that between Ginny and Zeke only the younger two were pale, less vibrant versions.

As for the casual racism, there is one old lady who is a young, lithe asian woman. In the text she is constantly referred to as a geisha from everyone’s point of view.

* As odd a couple as the menacing Reaper and gentle geisha made, it was obvious she loved him very much. (Eva’s POV)
* Even Reaper and Lee were cuddled together; the gorgeous geisha tucked close so his cut was around her like a blanket. (Rhys’ POV)
* She met Lee’s dark eyes over the rim, and the giggling geisha tilted her margarita (Eva’s POV)
* Ginny noted that his eyes never strayed from the graceful geisha as she skirted through the crowd (Ginny’s POV)

As you can imagine, my knuckles tightened pretty hard around the edges of my iPad while I was reading this. At best this is the laziest form of characterization. Let’s draw on people’s misconceptions about geishas and just have the reader overlay those onto this character so I don’t have to do any work describing her. On the other end of the spectrum it is crude racism.

Later, Zeke, the king of the Lords of Mayhem refers to someone as a “Wop”. He’s a decorated Cleveland police detective so it is particularly encouraging knowing that he has a law enforcement badge over that racist heart of his. It may be that you were trying for gritty realism, but the Lords of Mayhem with its totally clean books, no drugs, no illegal activity, full of happy family sentimentality really does not come off as an underground gang filled with a bunch of derelicts.  Instead, it’s like a club that hangs out on the weekends for cookouts.

“I think there’s a pretty good chance that’s what happened. Just like I think there is little chance of him sticking to that kind of deal. Whatever happens to Eva, Mox isn’t safe as long as the slippery Wop is out there,” Zeke said.

I’m probably done with this series for now. I like the big family idea that you get from these Motorcycle Clubs and the idea of sisterhood between the old ladies but the poor writing, thin plotting, and non stop reference to an Asian woman as a geisha made reading this a sore trial. D