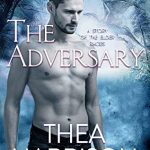 Dear Thea Harrison, The Unseen, released last year, was originally planned to be the first of 4 linked (serialised?) novellas, a spin-off of the Elder Races series, set in the fictional Other Land of Rhyacia. As it happened, due to events since then, The Chronicles of Rhyacia was reimagined as ... more >