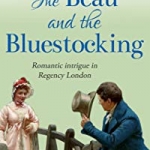 REVIEW: The Beau and the Bluestocking by Alice Chetwynd Ley

1782, London Alethea Newnham is a young woman with decided literary tastes, to the extent that she is called a Bluestocking by the gossips of Town. Educated in the country by her scholarly father and raised as an equal with her brothers, Alethea finds it difficult to play romantic games ... more >

Dear Ms. Fenton: Wow. What. A. Ride. Your novel, The Duke’s Holiday, leads us into the delightful story of the Duke of Montford, one of (if not) the most powerful man in the kingdom, and Astrid Honeywell, his sworn nemesis. Well…not quite his sworn nemesis. But their families have been feuding for ... more >

PLEASE NOTE: this conversational review does contain some spoilers. Jennie: I was one of many readers mightily impressed with Carolyn Jewel’s previous historical romance Scandal, which I read in January and graded an A-. Janine: Totally with you on that. Scandal was one of the most impressive books I’ve read ... more >

Dear Ms. Carlyle: In contemplating your backlist, I’ve decided that you are one of the most consistent authors I read. My favorite book of yours remains the first one, My False Heart published back in 1999. I don’t know whether it is my favorite because it’s the first one I ... more >

Dear Mrs Simonson, I first read “Lady Elizabeth’s Comet” a few years ago when I was lucky enough to score a copy of it through a used bookstore. Ever since then, I’ve touted its merits to those looking for intelligent heroines, beta heroes and wonderful storytelling. I’m delighted that Uncial ... more >