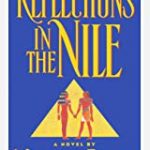 REVIEW: Reflections in the Nile by J. Suzanne Frank

After entering an ancient chamber on an archaeological dig, Cloe Kingsley is sent back in time to the year 1452 B.C. to the Egyptian court of Hatshepsut and into the body of a corrupt priestess, where she is now forced to face her new environment and the challenges it holds. ... more >

Yi-Fen Chou and the Man Who Wore Her – You may be following the fallout from the revelation that one of the poets whose work is included in the Sherman Alexie edited volume of the Best American Poetry 2015 is a white man who assumed the pseudonym of a fictitious ... more >

Wednesday News: Audiobook evolution; the Met Gala and damaging stereotypes; the oldest song in the world

Audiobooks: Where They’ve Been & Where They’re Headed – A pretty interesting interview with Michele Cobb, executive director of the Audio Publishers Association. While some may think of audiobooks as merely a tangent of the print publishing industry, that isn’t the case. In addition to unique and ever-evolving technologies, there ... more >

Borrowing, appropriating and stealing as old as art itself – An interesting article, written in response to the recent jury verdict against Robin Thicke and Pharrell Williams for the similarities between “Blurred Lines” and Marvin Gaye’s “Got to Give it Up.” There is a great deal of legitimate concern about ... more >

Being crazy: An insider’s view on ableist language

[themify_box style=”light-yellow rounded ” ]Kris used to review and blog on book related things before RL intervened in big, scary ways. Now she tends to somewhat vaguely hang out on Twitter, comment *very* infrequently on reading matters that pique her interest and talk about her mental health journey on tumblr ... more >