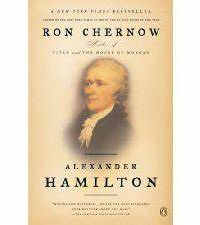 I had long wanted to see Hamilton, Lin-Manual Miranda’s award-winning musical based on this book, and I finally got a chance on my 50th birthday in 2019. I liked it a lot, though it wasn’t the magical experience for me that I know it was for many. When I saw this biography on sale on Amazon, I snapped it up. Unfortunately for me it was a bit of a slog, far too worshipful (to the point of distastefully trying to reason away Hamilton’s infidelity) and dry at times. Hamilton did come through as a living person, though, with real and relatable faults and virtues. I gave this a high C+ when I finished it, but I’d almost raise that grade to a low B-.

The Canterville Ghost by Oscar Wilde

I had finished my last classic read, Little Women, which I mentioned in a previous post was kind of a drag. I wanted something shorter, lighter, and fun, and so I decided it was time for some Oscar Wilde. This was a slight but cute short story of an American diplomat and his family who move into an old British mansion, Canterville Chase, that is haunted by Sir Simon de Canterville, a fearsome ancestor who killed his wife and was subsequently walled up and left to starve to death by his wife’s brothers. Of course that sounds macabre, but the macabre is treated with such humor here that it’s hard to take even uxoricide too seriously. (Note: I didn’t just have “uxoricide” in my back pocket; I had to look it up.) The hook here is that the Americans are thoroughly unimpressed with the ghost, to the point where the family’s teenaged twins begin to harass *him*, rather than him terrorizing them. This is so humiliating for the ghost that he becomes depressed and hopeless. The ending is actually rather touching, with the family’s teenage daughter Virginia saving the day for Sir Simon. I gave this a B.

Love in the Afternoon by Lisa Kleypas

This is the last of the Hathaways series, featuring the youngest daughter Beatrix. There is a Cyrano de Bergerac storyline early in the book, which I was intrigued by and had hopes for. But at the time I finished this I simply wrote in my book log “I dunno, I’m done with the series. It was fine. Sigh.” Several months later, I barely remember anything about this book, so I tend to think the Cyrano angle didn’t impress me as much in its execution. I did still give the book a B, so it wasn’t bad, or anything. I think it was just a bit too much traditional historical romance for me, reading the whole series in a relatively short time.

His and Hers by Alice Feeney

Hmm, not sure how to even synopsize this. The “his and hers” refers to the shifting perspectives of a police detective investigating a murder and a TV presenter who is reporting on it. It quickly becomes clear that there are close connections between the two, the first victim, and subsequent victims (there are several, and the murders were unexpectedly grisly).In addition to these two narrators, there’s a third unnamed one – the killer. Which doesn’t preclude Jack or Anna (our two main protagonists) from being the killer, though there are several other possibilities. (One took me by surprise and I felt dumb for not putting two and two together.) The ending was…I believe the word is “batshit”; at the risk of spoiling any potential readers I will say that it’s the most unlikely person in the entire book. But this was an entertaining, if dark, read, and it kept me fairly entertained. I gave it a B. 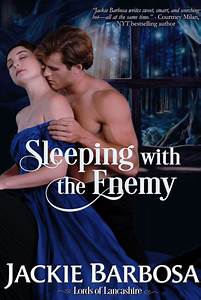 Sleeping with the Enemy by Jackie Barbossa

This was a rec from the friend of a friend. It’s the War of 1812, and the Battle of Plattsburgh has just taken place in upstate New York. A widow and apple-farm owner, Laura Farnsworth, finds an injured British soldier unconscious, far from the battlefield, and impulsively takes him home to recuperate. Geoffrey Langston appears to have been wounded not in battle, but from a blow to the head from an unknown attacker. He awakens in Laura’s home with no memory of the moments leading up to the attack, and Laura makes the decision to shelter Geoffrey, since they don’t know if it’s safe for him to return to his unit (it would be a trek, anyway, since the British have retreated back to Canada in the wake of the loss at Plattsburgh). This book started kind of rough for me. There is a lot of mental lusting on both sides very early on, when Geoffrey’s severe injuries would seem to preclude such thinking on either of their parts. The writing felt awkward to me at first, as well; I got more used to the author’s style but at first it felt like things were overexplained at times. Eventually I began to enjoy the book more; I was surprised with how the story proceeded in the second half. I still had niggles; for one thing, the villain of the piece was blindingly obvious. I had originally given the book a B- in my book log, but I have warm enough feelings weeks after finishing it to raise that to a straight B. (I would have to give the author that if only for the mention of Andrew Jackson in the afterword, “Yeah, fuck that guy.” Hatred of Andrew Jackson warms the cockles of my heart.)

I’ve read Wright before – her book Get Well Soon: History’s Worst Plagues and the Heroes Who Fought Them is particularly recommended at this time, if you can handle history and present-day reality converging. Killer Fashion is a much slighter book, a short illustrated account of the various ways fashion and makeup have tried to kill people over the years. There’s Isadora Duncan’s famous scarf, and the lead paint craze, but also less familiar killers like crinolines. Did you know that Oscar Wilde’s two half-sisters both died from burns when their crinolines caught on fire? (Wright doesn’t provide any other detail, and I imagined this happened in two separate incidents, but further research indicates that it was at the same party – it sounds like the second sister’s dress maybe caught fire when she was trying to help her sister? Either way, super weird and awful.) Men have not being totally immune to being killed by fashion, either – plastic cuffs (which were also flammable) were the rage for a while, and then there was the high collar trend that strangled more than one drunken man who passed out with his collar still on. Can I just say I don’t regret not wearing heels anymore? My grade for this was a B; it would have been higher, but it is, as noted, a very slight book.

His Truth is Marching On: John Lewis and the Power of Hope by Jon Meacham

When John Lewis died on July 17th, I had to acknowledge what I sort of already knew: he didn’t belong to me. I was not unique in my adoration for him; thousands, millions of people viewed him as a living saint. This incisive biography takes on Lewis’ life and legacy, focusing mainly on his actions during the civil rights era of the 60s. Meacham acknowledges the saint narrative, and even promotes it, but this is a biography of a man, not a myth. Lewis did seem to have a sort of purity to him – and I’m sure that at some point it was beneficial for him to promote that view. There is no doubt he was an unusually good, loving and courageous man, one who believed in the gospel of non-violence and in Christian love. He’s actually most relatable in moments where he acknowledge hurt feelings or bruised ego, as when he was voted out as chairman of the Student Nonviolent Coordinating Committee, which he’d been a founding member of. It was also bracing to be reminded that Lewis had a fiery side: his speech at the rally during the March on Washington was so incendiary that parts were rewritten in the moments before he delivered it to make it less confrontational. There is so much in this book that I found relatable to our times; sometimes it feels like we haven’t come all that far from the turbulence and hate of 60 years ago. But Lewis was a big believer in hope, and in putting one foot in front of the other and keeping on. In his honor I feel that is the least I can do. My grade for this is an A.