REVIEW: It Happened One Midnight by Julie Anne Long

This is book eight in your Pennyroyal Green series, the realization of which made me reflect on the unevenness of the series for me. But when I look back at the grades I’ve given the six books that I’ve read so far (how is that I haven’t read How the Marquess was Won? Weird), my grade range isn’t really that wide – from A- to B-. Actually, I’m surprised that I gave three of the six books a B- grade, because that’s really not a very good grade for me. I’m starting to wonder if your books are uneven for me not from book to book, but actually within the books themselves; that might explain why I think of you both as a very talented author as well as one who is, well – uneven. 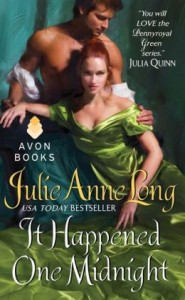 This latest book started off irritating me in a couple of small and admittedly personal ways (meaning, they weren’t flaws in the book but just things that bugged me specifically). Jonathan Redmond encounters Thomasina de Ballesteros (known as Tommy – her nickname being irritant #1) outside the window of some duke at midnight. Why either of them are there is not clear, and continues to not be clear, particularly on Tommy’s part, for rather too long, IMO (irritant #2). I don’t really like it when characters muse extensively about things that are opaque to me as a reader; I think I get anxious because I feel like I’m supposed to understand or remember whatever they’re going on about and it interferes with my enjoyment.

Jonathan Redmond is the youngest child of Isaiah Redmond, a stern and disapproving father whose driving force is his success in business. Jonathan has been a bit of a ne’er-do-well to date, but he’s actually developed some enthusiasm for business (specifically, he wants to invest in a color printing process that a German inventor he’s acquainted with is working on). Jonathan hopes that his father will appreciate his son’s savvy and help steer him towards some financial backers, but Isaiah entirely dismisses him, and instead insists that Jonathan marry a suitable heiress before the end of the year, or be cut off financially.

I was a little disappointed at this trite plot development, but I was also genuinely moved and troubled by the scene between Jonathan and his father. Isaiah really seems to have no respect for his son; all he thinks Jonathan can offer is a pretty face that will help snag a proper wife. The realization that father thinks so little of him shakes Jonathan up.

Thomasina de Ballesteros is the by-blow of a Spanish courtesan and a member of the English aristocracy. She has made her way into society of a sort by becoming a protege of the eccentric and elderly Countess Mirabeau, who holds regular salons that attract artists and young bloods (the latter particularly showing up after word spreads among them of Tommy’s unique beauty and abundant charm). Tommy’s background at first felt disappointing cliched: she lives in genteel poverty in a ramshackle building with an assortment of disreputable characters, including what sounded like one or two Disney whores (TM Jayne) and a giant of a man with a mysterious background who acts as a sort of bodyguard for Tommy on occasion. In her free time she rescues abused children (no, really). I feel like I’ve read books with similar heroines dozens of times, and avoided many more books precisely because the heroine fit this description. I don’t mind a do-gooder heroine and I don’t mind a poor heroine but something about a poor do-gooder heroine (accompanied by a motley group of scrappy sidekicks) sets my teeth on edge. It’s just too much.

To be fair, Tommy’s eccentric background is not played up too much; it wasn’t featured nearly as much as I feared it would be. And she does have dimensions and depth that the average heroine of her ilk usually lacks. She’s clever and aware of her power over the opposite sex. She’s also aware, as she notes herself several times, that she’s in over her head with some of her clandestine activities. I just would have liked it if her background was a little less hackneyed. Also, the sanitized inclusion of the seamier side of life in 19th century London was kind of an issue for me. Rescuing one mistreated child servant (who is, naturally, just as cute as a bug) just reminds me of all the other mistreated kids who weren’t rescued. So you save a girl from a position in which she is regularly beaten – all that happens is that some other poor kid takes her place. You rescue a child forced to work under dangerous conditions in a cotton mill; great, but now some other little kid is forced to risk his or her life on a daily basis. Kind of sucks, really.

I did like the slow way the attraction developed between Jonathan and Tommy. They appreciate each other as witty, smart scrappers without a whole lot of mental lusting, early on. Basically, they actually like each before they want each other, and how rare does that sometimes seem to be in a romance?

The story picked up for me in the last third or so. Jonathan, particularly, really grew on me, and grew as a character, as well. Like all the Redmonds, he’s been scarred by the disappearance of his eldest brother, Lyon, who took off for parts unknown after having his heart broken by Olivia Eversea. (As readers of the Pennyroyal Green series know, the books follow the Redmonds and Everseas, who have apparently existed in enmity in the same small village for generations.) His realization that his father essentially has no respect for him really does inspire and spur Jonathan on, if only to prove Isaiah wrong.  I liked that about him. Tommy felt more faintly sketched to me; she had an interesting and tough past that I kind of wish had been explored a little more thoroughly. She did have her own arc in which she came to accept that her dreams of a family were not going to turn out the way she hoped.

For those who care about such things (whether love or hate), the fact that this is part of a series doesn’t intrude too much on the story. There is some excessively expositiony stuff early on with Jonathan and his very pregnant sister Violet, but other than that I think the hero’s family ties enhance rather than detract from the story. My grade for It Happened One Midnight is a B.