REVIEW: WTF: What the French?! by Olivier Magny 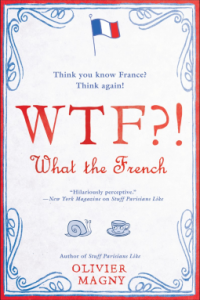 With Stuff Parisians Like, Olivier Magny shared his hilarious insights into the fervently held opinions of his fellow Parisians. Now he moves beyond the City of Light to skewer the many idiosyncrasies that make modern France so very unique.

In France, the simple act of eating bread is an exercise in creative problem solving and attempting to spell requires a degree of masochism. But that’s just how the French like it—and in WTF, Oliver Magny reveals the France only the French know. From the latest trends in baby names, to the religiously observed division of church and state, prepare yourself for an insider’s look at French culture that is surprising, insightful, and chock full of bons mots.

It was the promise of the “insider’s” look at modern France that caught my attention and enticed me to read your latest book. While many of my preconceptions about France are in fact accurate, some, alas, must now fall by the wayside. Really, 1990s French parents named their offspring after characters in “90210”? Truly this would be “un prenom de merde.”

The book covers lots of different subjects and angles of modern French life. But most of the many chapters are about 2-4 pages long. Kind of a “Readers Digest” version of a lot of things. If the book were an internet article, I’d finish some of them thinking “Click bait.”

Still there’s an abundance of interesting tidbits on every walk of life from the leftist education nationale to the recitation of poetry by Fabrice Lucini. Want to see cultivated beauty in France? Look for the Villes at Villages Fleuris de France signs. Is the French person you’ve been seeing serious about the relationship? If you’ve been kissed on the mouth, then yes. Want to know how many bisses to bestow if they should be bestowed at all? There’s a website with numbers by region. Planning a trip to France? Avoid going during les vacances scolaires.

There’s an overview of why France is secular, why immigration was encouraged in the 1970s and how those are now influencing what is happening there. Strikes? France has got ’em along with a sizable portion of the population which works for the government. Why are the rich fleeing the country? Because of the taxes and bureaucracy heaped on them to pay for government workers and those subsidized by the state who don’t work.

I was stunned to learn that the French don’t speak French as well as they used to anymore and interested to learn of the argot and verlane spoken in the banlieues (think Cockney slang). And no more circumflexes? Nutella – and thank goodness I don’t have to worry if it’s masculine or feminine – from a spoon is divine but I don’t know if I could bring myself to put my bread on the table though I do now know where it goes if I were to.

One of my cherished visions – of slim, elegantly dressed natives lingering over a meal of wonderful French food – has now died a terrible death. T-shirts with English words worn by people who have more McDonalds per square meter than in the US and who eat almost as much pizza as we do? Noooooooo. The sheer scope of French taxes astounds me though a friend of mine from Maryland believes that state could give you a run for your euros.

The French can’t dance? Vraiment? Having heard that driving in Paris was like a dystopian contact sport, now I discover that parking is a spectator sport and bumpers play a big role in that. And yeah, don’t mess with my American car.

So, I learned a lot and have a better understanding of some things French but I think I’ll skip any 2 hour debates and hope that things aren’t as grim there as the DVM website says. Off to dip into some nutella for my afternoon gouter! B