Warning: mysqli_query(): (22032/3141): Invalid JSON text in argument 1 to function json_contains: "Invalid value." at position 0. in /home/customer/www/dearauthor.com/public_html/wp-includes/class-wpdb.php on line 2187
 REVIEW: Where the Heart Is by Sue Moorcroft
May 8, 2020 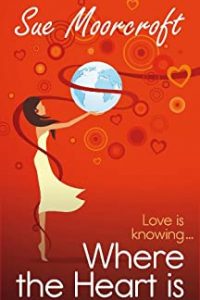 Malta 1968: Sylvana Bonnici’s parents are dubious about her marrying Rob Denton, a British army staff sergeant, but Sylvana dreams of being an army wife and travelling the world – in mini skirts and big hats, like Jackie Onassis.

Sure enough, Rob is posted to exotic places like Singapore and Gan Island … but, unfortunately, the army dictates that he must leave behind his new wife. Sylvana has little choice but to live with her parents, who have moved to the UK.

In 1971 Rob is finally offered a UK posting and the married quarter that Sylvana has yearned for – but is no longer sure that it’s what he wants. Sylvana’s reaction to his new plans shocks him, but it’s a horrifying accident that proves that home is more than just a place to live.

It’s a while since I read a book of yours but the blurb for this one sounded different. Off the top of my head, I can’t think of many books written now that are set in the 1960s/1970s. I also wanted to know if British Rob and Maltese Sylvana would be able to work out their Army marriage.

The opening section of the novella, set in Malta, got a bit detailed in describing Sliema where Sylvana and her family live. It’s not that I don’t like having a good idea of where the characters are but the extensive list and little tidbits of information about Maltese cities – which were never actually in the story – slowed things down. But then the story kicks into gear as Sylvana plans her bouffant hair wedding (one of my older cousins married in 1971, with fluffed hair and a dress that sound remarkably like Sylvana’s so I could just picture how she looked) which must be rushed up a few days as the Army has told Rob to jump and he is obliged to inquire “how high.” The details about their (short) time together on Malta once Rob gets back are a blast back to the late 1960s military life past.

Poor Rob and Sylvana – this will be just the first of the separations that mark the early years of their marriage. Sylvana knows what she signed on for in marrying a man in the Army. It’s just that she is getting a little peeved that the Army isn’t meeting what it is supposed to have promised to her. She wants to actually live with her husband, in a married quarter, and travel to exciting foreign destinations. Well, wish in one hand as Sylvana learns.

When everyone ends up in England, I did enjoy seeing the reactions of the Maltese to their new home – now this was pertinent as this currently her home and is where Sylvana has decided she wants to be. Being thrust into an English winter straight off the plane from warmer Malta is a shock but the in-laws are welcoming and her family is now here as well.

I felt as if I were in Rob’s tiny, cramped bedroom in the parent’s home in Yorkshire while a cadre of enthusiastic new relations swamp Sylvana and I loved the description of her dyed faux fur coat and contrasting boots. Yay late 1960s fashions. Ditto the little details about how Rob’s mam won’t have a phone in her house and how dependent they are on buses and taxis for transport.

The family relationships are warm and loving and so much is quietly conveyed in quiet glances between long married parents who try to help Rob and Sylvana work out their issues. Yes, the love never fades but the stresses of Rob being posted “there” while Sylvana has to stay “here” do add up. Thank you for not skimping on the realities they faced and the fact that there were going to be tensions because of this. For a novella, the story packs a lot in but I didn’t feel cheated of emotion or plot. B

→ Jayne
Previous article: What Jayne is reading and watching Spring 2020
Next Post: REVIEW: The Yeggman’s Apprentice by CK Crigger