REVIEW: We Ride Upon Sticks by Quan Barry

Acclaimed novelist Quan Barry delivers a tour de female force in this delightful novel. Set in the coastal town of Danvers, Massachusetts, where the accusations began that led to the 1692 witch trials, We Ride Upon Sticks follows the 1989 Danvers High School Falcons field hockey team, who will do anything to make it to the state finals—even if it means tapping into some devilishly dark powers. In chapters dense with 1980s iconography—from Heathers to “big hair”—Barry expertly weaves together the individual and collective progress of this enchanted team as they storm their way through an unforgettable season.

Helmed by good-girl captain Abby Putnam (a descendant of the infamous Salem accuser Ann Putnam) and her co-captain Jen Fiorenza (whose bleached blond “Claw” sees and knows all), the Falcons prove to be wily, original, and bold, flaunting society’s stale notions of femininity in order to find their glorious true selves through the crucible of team sport and, more importantly, friendship.

I have Darlynne, one of our readers, to thank for this recommendation. Two-ish months ago she posted this on an Open Thread post.

I’m re-reading WE RIDE UPON STICKS by Quan Barry for my book club this month. I love that the person who hosts (now via Zoom) gets to pick the book and this was my choice almost from the blurb. Highly recommended if 1989 girls’ field hockey and potentially witch-like power appeal to you.

Just that little bit of description caught my interest and made me look this book up then get my hands on a copy. From page one, reading it was a little like falling down a rabbit hole in time. Yes, I am a product of the 1980s and this took me back in high school and college. I can hear the lockers slamming, feel the corny pep rallies, see the coaches who actually do very little as far as teaching, remember special study hall for seniors. The songs mentioned were playing in my head as I read. Despite the book having a lot of teenage drama and hijinks, it didn’t feel angsty. It did feel real – or as real as a book which features an entire field hockey team thinking that pledging their dark loyalty to Emilio Estevez will get them to the State Championship.

The First person plural narration allows us to know everything that’s going on. The narrator appears to be one of the players but is never addressed by the others. Because of this style of narration, there’s a lot of telling and the book moves slowly. But it’s a “meaty” slow, a “packed with details I didn’t want to miss” slow rather than boring. I also learned a lot about field hockey and was thrilled to see such a physical girls’ team sport featured.

The details colored it 80s: Emilio Estevez, Poison, Pat Benatar, Janet Jackson plus the music of the day played on boom boxes and Walkmans. Characters wear acid wash jeans and eat at American mall standard food court restaurants Orange Julius and Cinnabun then go to stores I remember. There is punk dyed hair, Girl Corey’s Fiero, and Trapper Keepers. There was also a call back to what I remembered from elementary school in the bizarre “Light as a Feather” ritual. And the hair! Oh my yes, 80s hair. Hot rollers and styling wands used to poof hair as high as it would go and then shellac it with hair spray. A friend of mine used to send us choking out of the dorm bathroom as she unloaded a can of Aqua Net that kept her hair from moving in a wind tunnel. Those who have never actually seen one, behold The Claw. 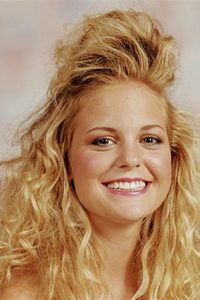 It’s hilarious that the Claw is Its own character. There is also le Splotch and later The Chin who have (maybe?) sentient roles. At first it’s a little weird but after a while, I kind of liked the ruthlessness of them all. Do not mess with the Claw. As things get more intense, the eleven members of the team can invade each other’s thoughts which comes in handy during tests.

But as each chapter tells the story of one of the team members – minus Abby Putnam – a lot of other things are re-lived such as how life wasn’t wonderful for the 5% of the population there that wasn’t white or those who didn’t know their sexuality – only that they were different – or the few brave enough to be open about not fitting in. Even the white characters have some issues as shown in the “hold nothing back” essays which one girl writes for college applications. The seventeen and eighteen year olds also experienced a stalker (who drifts in and out of the story) and demands to give in to sex with boyfriends. This was pre-public sex tapes and revenge porn but young women have always been under that pressure.

So this took me straight back to the eighties which I enjoyed and had a blast remembering but I think it would be hard for anyone who didn’t live it to catch all the references or even care about them. It’s kind of dated right off the bat. Or maybe it’s retro. And towards the end, it began to drag a bit. By the time it was over, I was ready for it to be. The way we learn the outcome of the championship is clever and I found myself agreeing with the actions of one character. The epilogue shows that this did have an effect on them all – and for the better. Besides how funny and witty it was, the most important thing I took away from it though, was were these young women giving themselves over to darkness – or just growing up and coming into their own? B