REVIEW: Walk on the Wilder Side by Serena Bell 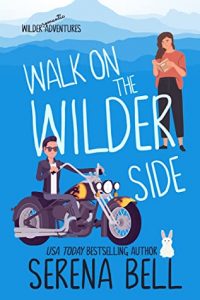 I’ve enjoyed your books before so when I saw Walk on the Wilder Side at NetGalley I took a closer look. I want to say that the book is light-hearted – and for the most part I certainly experienced it that way – but there are some heavier topics canvassed, namely cheating and job loss and Brody’s arc includes finding his place as a non-screw-up adult within his family, within himself. Perhaps it’s more that there are plenty of lighter moments and that Rachel and Brody’s relationship includes a lot of fun and laughter. Mostly the tone of the book felt optimistic and upbeat.

At the start however, Rachel Perez is having a no-good, very bad day. She loses her dream job (through no fault of her own) and comes home to find her “perfect” boyfriend is cheating on her. In one fell swoop she loses her job, her man and her apartment. So she relocates from Boston to Rush Creek, Oregon, where her Cuban-American family is, to regroup and make a new plan. Rachel is a planner. I relate. I’m a big fan of plans myself actually. Recent events were most definitely NOT in Rachel’s plan.

As it happens, her mother has recently broken her foot and is on crutches for a few weeks and asks for Rachel’s help with her new business while her mobility is not ideal. As Rachel puts it:

The doctor said five weeks to heal the foot, and almost a week has already passed. I can start the job-hunting process just as well here as in Boston. I won’t have to look for an apartment, because Louisa is letting me sublet a room in hers.

I bet in another four weeks, I’ll have stopped crying at unpredictable intervals, which will make me a much stronger candidate in job interviews.

Brody Wilder is the motorcycle-riding, tattooed bad boy of the Wilder family, a family which contains five (very hot) brothers and a sister. Brody is the second-eldest (the oldest brother, Gabe got his HEA in the first book in the series Make Me Wilder – a book which is definitely in my reading future) Wilder brother. Their dad died when he was only 14. Gabe took the caretaker role for the family. Brody had been the prankster and school troublemaker and that continued. There has been tension between Brody and Gabe for the intervening 15 years. Gabe is too bossy and seems to expect Brody to mess things up. Brody, angry at the prejudgment, tends to do just what Gabe expects almost out of spite. But Brody is 29 now and he’s tired of being the “bad boy”. He doesn’t like the way he’s viewed by his family and the town and he wants things to be different. He’s just not sure how to make it happen.

When the Rush Creek Rodeo shut down and a natural springs in the town became the main tourism draw, Wilder Adventures, had to pivot. Brody’s Boat is his part of the business and his first idea is a Boat Book Club. Sounds easy right? Only things don’t go so well on that first occasion and Gabe is angry with Brody for the bad reviews Wilder Adventures gets as a result.

Brody and Rachel team up with her mother’s new direct sales “self-indulgence and self-care” business and his boat to revamp the business idea.

Brody has tried hard not to notice Rachel for years. She’s his best friend’s little sister and off limits. Rachel, for her part, has had a crush on Brody for most of her life.

When she comes home to Rush Creek she’s thinking that maybe it’s time to ease up on “the plan”. Brody is hot and ripped and it looks like he’s finally noticed she’s all grown up.

Brody had been engaged to Zoe but they split up when he found out that the son he thought was his was actually the product of a relationship Zoe had been having with a married man in town at the same time she was dating Brody. He’s crushed by the fact that he’s not Justin’s dad. He loves that little guy. Brody wants to keep Justin in his life somehow but he’s not sure what that is going to look like. And he’s worried how his family will react when they find out the real reason behind his and Zoe’s breakup.

Rachel’s default setting is to see Brody as capable and grown up and not a screw-up. And, through her eyes, Brody begins to see himself that way too. Over the course of the book he starts to back himself and his abilities, leaning into his strengths and finding ways to work around any weaknesses. He realises he doesn’t have to stop being Justin’s dad if he wants to be a father to the little boy – biology is only one factor after all and not the most important one. And he falls deeply in love with Rachel.

He’s not convinced he’s “plan material” for her and she’s going back to Boston, probably, but he finds himself beginning to hope.

Rachel loosens up around Brody in a way she has been unable to with anyone else. What she thinks might be a “bad boy fling” quickly becomes far more. Brody encourages her to be spontaneous and take a leap here and there (sometimes literally) and she sees the world doesn’t end when she does – in fact, things are pretty great.

There’s quite a bit of sexy humour as a result of the “self-care” in Rachel’s mother’s business being sex toys. Poor Brody thought Rachel was selling candles and bath bombs so when the dildoes and fleshlights came out he was… surprised to say the least. And Rachel’s own reaction when she first realised what her mother was selling was pretty funny too. The book is overtly sex positive and there are a number of little anecdotes from (mainly women) who attend the parties which I expect are based on real experiences.

The sex Rachel and Brody have is super hot, creative and fun. There’s no rush to PIV sex – Brody enjoys a good make-out session.

But Brody and Rachel’s connection is more than physical. They’re not entirely opposites either – they have plenty in common. Rachel is entirely on board with baby Justin being in Brody’s life and actively encourages it. I liked the found family aspect of the story a lot.

I wouldn’t have minded if the genre-convention of the third act break up was skipped over but at least it didn’t last very long.

I really liked that the growth both characters experienced was only partly because of the inspiration and encouragement of the other. Brody didn’t rely on Rachel or the sex-toy parties completely to boost his business – he had other creative ideas and he made them happen. Rachel didn’t just host parties on Brody’s Boat. She found a new confidence in helping people with intimacy aids and that inspired some changes too. It made me more assured in them as a couple, that they could be successful separately too.

There’s something about the writing style and the story that in spite of the heavier aspects left me thinking of Walk on the Wilder Side as “feel-good romance”. That’s what the cover says to me and what the book delivered. I liked spending time with the Wilder and Perez clans very much. I’m looking forward to reading about the other Wilder siblings and spending more time in Rush Creek.