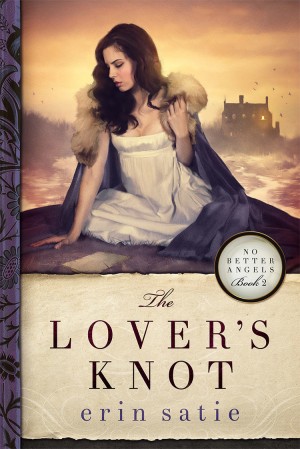 You submitted a review request for your first book. But I went your website and saw that there was another book that you had written, The Lover’s Knot, and  I decided to start with that title instead. I don’t really know why. I actually bought both and this one showed up first on my Kindle screen.

When Julian Swann returns to the small village of Padley in Derbyshire, England,  he’s been transformed from impoverished Foreign Office clerk to Duke of Clive. He’d been born seventh in line and had no belief he’d ever sit in High Bend as the owner of the duchy’s grandest holding. The scandalous news is that the previous duke killed himself. When Julian reads his suicide note, he knows immediately that it is forged and there is only one person in Padley who is the likely suspect–Sophie Roe.

Sophie inherited a healthy portion from her parents when they died but the financial mismanagement of her trustees, the Duke of Clive and her uncle, led to all of the money being lost. On the night of her engagement to Julian, she’s injured and the laceration on her face becomes permanent, rendering Sophie with a tattoo under her eye.

She breaks off her engagement with Julian, finds herself without suitors but manages to start and develop a business of ink brewing. Ten years later, Sophie is independent and Iron & Wine Writing Fluid is used by the Foreign Office for the indelible nature of the ink.

Sophie’s interest in ink comes from a personal issue. She has a very bad memory. This is not just one person being forgetful but it is a real disability so much so that in order for her to remember things, she has to write them down. And once they are written down, those words become her truth–even if they aren’t.

One wonderful aspect of the book was how Sophie’s avocation as an ink maker was incorporated into the story. I was the recipient of so many details such as how steel nibs aren’t as good as glass and gold because the steel corrupts “gall ink” or how the different colorations of the inks are produced. Sophie uses a mold base for brewing her ink.

The emotional conflict is centered around Sophie’s bad memory and I struggled with it because I couldn’t get a good sense for how it worked. For instance, she didn’t have to consult a recipe for brewing her ink. Was it because she had done it so many times that it became a permanent part of her pscyhe? When Julian returns, he tells her that her memory of what happened wasn’t accurate–that he never hurt her. She has to go back to her diaries and reacquaint herself with the past to assure herself that her recollection that Julian had harmed her was true. I wish the memory thing had been a little more explicit because the entirety of the internal emotional conflict rested on it.

Julian is the less interesting character. He still loves Sophie and he’d like to at least gain her forgiveness for whatever wrong it is that he was supposed to have done. Much of his time in the book is trying to ascertain who killed the former Duke of Clive or whether he actually did commit suicide.  The potential list of suspects was long and I was surprised at the outcome. I also thought the way that the death (and aftermath) was resolved was really clever and I appreciated the rather bloodthirsty actions directed by Sophie.

Sophie’s a great heroine and while I didn’t always understand her motivations (such as after forgiving Julian not ready to fully embrace him) but I appreciated the vibrancy of her character as laid on the page. I’ll definitely read more of you. B