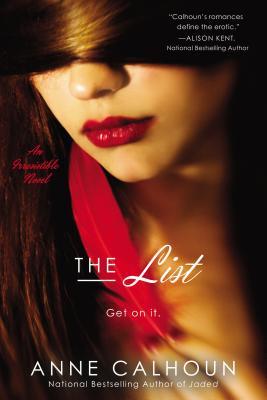 Matchmaker and stationery shop owner Matilda Davies brings people together. For those on her list, Tilda will find the man or woman of their dreams—whether it’s for an hour or a lifetime. But due to a painful past, the British expat has never put her own name on the list. Instead, she limits herself to emotionless and commitment-free hookups. Then she meets Daniel, who wants not just her body, but also her heart…

Daniel Logan hides the soul of a poet under the suit and tie of an FBI agent. Specializing in financial crimes, he pieces together stories of greed and ensures justice is done. He plays by the rules—until he meets Tilda. He’s drawn in by her passion as well as her mysteriousness. Daniel knows that no matter her secrets, he’s the perfect match for Tilda. But even pleasure doesn’t come with a guarantee…

At the end of the first chapter I had the following questions:

I was on the hunt for clues thereafter.  I found it a refreshing way to open a novel and it certainly caught my interest.  I wondered if my questions would be answered and if I could believe in their relationship when my naturally cautious nature queried why they had married when it seemed they didn’t know one another all that well.  I did get my questions answered and I did believe the HEA in the end because it wasn’t presented as “Voila! All is well!” but rather a journey they were walking together and were committed to walking together. Perhaps my favourite line in the novel (apart from the last one) is when Daniel is expressing just this to his sister.   Daniel’s confidence in their relationship is pretty amazing and the ending is just about perfect.

Although the setup is for a mystery, the reader has a large helping hand when the story proper is told from Tilda’s perspective as well as Daniel’s.  Even so, Tilda has an air of… restraint about her.  She’s tightly buttoned up and doesn’t let a lot slip about her deepest self.

The silence crackled with irritation. Tilda, She Who Sat On Ledges, didn’t talk about personal things.

She was laughing, or maybe about to cry. It was hard to tell, because Tilda not quite in control of her emotions wasn’t something he’d seen, ever.

Above the trunk hung a wooden placard with the phrase Home is where your story begins painted in quaint letters over a drooping tree and a New England–style house fronting a split-rail fence. The sign made Tilda smile when she recognized the foundation of such a key component of Daniel’s character. Daniel was all about stories, the stories money told, the stories people told. Real-life stories were complicated, full of twists and turns, sleight-of-hand, red herrings. He loved nothing more than slowly, carefully teasing apart the separate strands until he understood the whole story.

As much as their physical relationship is exciting and pleasurable, in some ways it obfuscates their path.  Daniels is all about solving puzzles and Tilda is a puzzle in an enigma inside a mystery.   He’s fascinated by her and wants to know her but doesn’t really, not until much later in the book when the pieces finally fall into place for him.  My sense was that he was terrified she would disappear one day and the ties of relationship and marriage, home and family were more about binding her to him at first.  As the story progressed their relationship became, I think, healthier for their eventual honesties and their marriage wasn’t a tie to bind, but rather it became something expansive and freeing.

There is a dark, moody and melancholy vibe to the story. Partly is it the pacing which is slowish (but not at all boring) and partly it is that sense of mystery which is at the heart of Tilda’s and Daniel’s relationship.  It has a very different feel to your contemporary full length releases (such as Uncommon Pleasure) and has a cadence and ambience much more like your novella – Breath on Embers (which I loved); although The List is not a menage book.

I found myself very glad that Daniel had the patience and care to get to the heart of Tilda and that Tilda recognised that Daniel was a person to whom she could be fully revealed before it was too late.