REVIEW: The It Girl by Ruth Ware 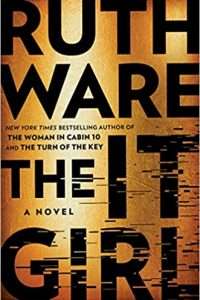 I was alerted to this book by a friend who knew it was in my suspense wheelhouse. I’ve read probably half a dozen books with similar descriptions: dual timelines that start with a group of friends in college, one ends up murdered, and years later the protagonist tries to unravel the truth behind the murder.

Despite the fact that the execution of the books I’ve read has been spotty, there’s something I love about this plot. I tend to like dual timelines anyway (more than the average reader, I think), and I also tend to like college-set stories (my fondness for New Adult romance series set in faux-Ivy-League schools is strong evidence of this). Also, I had heard good things about your books, so I was jazzed to try The It Girl.

Hannah Jones arrives at Oxford as an overachiever, the only child of a single mother. As with many of these type of “dark academia” books, she’s a fish out of water, intimidated and awed by the rich and beautiful people she immediately encounters.

In this case, the first person Hannah meets is her roommate, April Clarke-Cliveden. April is indeed rich and beautiful. She’s an early adopter of Instagram and a sort of baby influencer. Hannah is drawn into a circle that forms her first night at school: besides her and April, there are Will and Hugh, who Hannah knows from the posh school they all attended, as well as the more working-class Ryan and Emily. The group bonds over a game of strip poker, and Hannah becomes enamored of Will when he saves her from the embarrassment of having to take off more than she’s comfortable with. Hannah quickly discovers that April and Will have a thing going on, to her disappointment.

Before the school year is over, Hannah will have found April dead in their suite, strangled.

In the present day, Hannah is about 28, living in Edinburgh and expecting her first child with her husband, Will. After April’s death, Hannah was unable to return to school, and now she works at a bookstore. She is jolted by the news that former Oxford porter, John Neville, who was convicted of April’s murder, has died in prison. When a journalist contacts Hannah to try to discuss evidence that Neville may *not* have been guilty, Hannah’s equilibrium is further thrown off; it was largely Hannah’s testimony that convicted Neville.

Neville appears as a creepy possible-stalker of Hannah from her first day at Oxford, and he denied and then admitted being in Hannah and April’s suite shortly before the murder. Hannah identified him as the person she saw leaving the building immediately before she went up and found April. The significance of Hannah’s IDing seemed overblown to me, given that Neville eventually admitted he was there. But Hannah begins to question everything she thought she knew about that night and April’s death.

Back in the past, Hannah and April grow close in spite of April’s capriciousness and “pranks”, the latter of which alienate some in the friend group. April is the prototypical poor little rich girl, wealthy in material comforts but lacking a stable, loving family. Her relationship with Will is shaky, and more than once Hannah has suspected that April is entertaining someone other than Will in her bedroom. Since Hannah is still hung up on Will, this causes her more than a little ambivalence. It’s a credit to Hannah’s character (and maybe to April’s charisma) that Hannah doesn’t resent April more. As the school year goes on, it becomes apparent that the attraction between Hannah and Will is mutual, complicating things further.

Present-day Hannah begins to obsess over the idea that she sent an innocent man to prison, and delves into the memories of her friends to see if they know anything she might have missed. First up, she goes to visit Ryan; it’s a somewhat guilty visit since Ryan had a stroke several years before and she and Will have not really kept up with him. Ryan shares some insights. For one, there’s apparently a general sense that John Neville didn’t get a fair trial, which Hannah wasn’t aware of, isolated by both her status as star witness and her withdrawal from Oxford and the world in general after April’s murder. He also confirms that he was aware of the rumor that

April was pregnant when she died.

Hannah then discusses the events with Hugh, who also lives in Edinburgh, and Emily, who she goes to visit at Oxford, where Emily now teaches. Her meeting with Emily leaves Hannah wondering if Emily’s apparent hostility towards April could have been more serious than she’d realized.

Aside from Neville and the friend group, the only other viable suspect is a skeezy professor of Hannah’s who happened to have rooms across from Hannah and April’s suite (which seems weird, but I guess maybe they do things different at Oxford). Most of the suspect appear to have alibis: Ryan and Emily were in the bar that Hannah left with Hugh right before she found April; Will was not even at Oxford that night. It’s not quite a “locked room” mystery, but as the story progresses it has some of the hallmarks of one: not just who killed April, but how?

As it happens, I figured out the former at the 80% mark, which isn’t bad for me. Let’s just say that the person the protagonist is sure is the murderer definitely isn’t the murderer when there’s still a fifth of the book to go. From there, for reasons too spoilery to get into, it was pretty obvious who did it. The “how” wasn’t something I could have figured out without it being explained, and it felt faintly absurd. To be fair, in my thriller reading, merely “faintly absurd” is actually a compliment. Also, the more I thought about it, maybe it was kind of genius? I’m not sure. (The why ended up being a bit anticlimactic, though.)

Overall, The It Girl was a diverting and entertaining book; I’d probably give it a B+, but for the fact that Hannah was a bit bland and a couple of weeks after finishing it, the story hasn’t really stuck with me. My final grade is a straight B.

→ Jennie
Previous article: JOINT REVIEW: Remember Love by Mary Balogh
Next Post: REVIEW: What Souls Are Made Of: A Wuthering Heights Remix by Tasha Suri