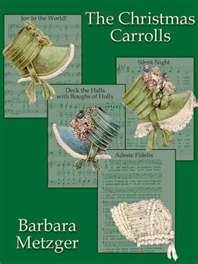 When I was scanning my memory for good Christmas stories to recommend here, I remembered reading two of your other holiday theme books but this one didn’t ring bells for me. Turns out that’s because though I have an older OOP paper copy, I’d never read it. Time to rectify that!

“If Lord Carroll had one wish, it was to see his lovely daughters – Joia, Hollice, and Meredyth – happily wed. The problem was finding three suitable beaux.

However ’twas Christmas, a time for surprises. Joia found a notorious rake coming to her rescue. Holly could not believe who was suddenly vying for her affection. And Merry won the heart of a brave but broken soldier. Not the best matches, perhaps. But if the season was truly magical, the Christmas Carrolls would indeed receive tidings of comfort and joy.”

The book manages to combine an anthology with a single title since there are actually four stories here but they’re all about the same family and take place sequentially during a few short months. I admit that at first the heroines’ names seemed too cutesy but the titles for the separate sections helped make up for it. “Comfort and Joia,” ” Beaux of Holly,” The Silent Knight,” and “Adeste Infidelis” amused me enough to shrug off my initial eye rolling.

I was amazed that all four stories engaged me and left me feeling that they had full story arcs and were complete enough to satisfy me. Especially since the three daughters all wind up with men they hadn’t known before the stories began. It did help that little bits of the previous stories were continued in each of the subsequent ones. But I think it’s the last story that moved me the most and kept the book as a whole from being too sweet.

Lady Joia is the eldest Carroll daughter. She’s been officially out for two years but has yet to find a man with whom she can hope to have the kind of love she’s seen in her parent’s marriage. She knows exactly what her parents are up to in inviting Lord Creighton Comfort, heir to a Dukedom, to their house party and she’ll have none of his rake-y self. Comfort finds Joia beautiful but her independence and determination not to have him – the woman turns him down before he’s even not made a proposal! – are infuriating. But as the days go by, Comfort begins to see the strength, defensive moves, and discerning eye of lovely Joia while she is impressed with the way he manages to rid her of an unwanted suitor and himself of a grasping widow.

Second sister Holly is the practical one, the one who does as expected and can be counted on. Only Holly wants romance before she settles down and she doesn’t think she’ll get it from the childhood friend everyone expects her to marry. Evan is nice but his proposal, “So what do you say we get buckled, old girl,” isn’t one that leaves stars in Holly’s eyes. Marrying him will allow him to do what he really wants to do – join the army – but will leave Holly as little but a chatelaine and childbearing waiting to see if he survives the battlefields. The prospect doesn’t thrill her. But there’s a dark horse in the running, someone Holly thought she wouldn’t like, a person whom her parents and family are stunned to discover has won her heart but who, in the end, is as perfect for her as she is for him.

Madcap Merry is too young for marriage – or so her doting parents thought. Recently minted Sir Maxwell Grey faced down the Frenchies in Spain but shakes like a leaf at the thought of house parties … and young women at house parties. Luckily for him Merry talks a mile a minute and doesn’t make him stutter anything in return. Still though her family likes him and admires his determination to learn husbandry, they’d rather he practice it on his little estate than with Merry. Merry, and her dog Downsey, and an untimely nosy companion, however, move that timetable up much more quickly than anyone expected.

Lord and Lady Carroll have been devoted to each other for many years. Theirs is the example held up of a one that defies the odds of a ton marriage. But a one time slip from years ago now threatens to rip the fabric of their relationship apart. Lord Carroll’s heir presumptive is a wanker and the entire staff at Winterpark joins with him in his maneuverings to have a young boy declared the lost grandson of the Earl’s dead younger brother. Even his three daughters unite behind the effort but what of Lady Carroll? Can she face having her husband’s bastard be a daily reminder of his betrayal and her pain? At first she thinks not but ’tis the season and all discover that the human heart is big enough for miracles.

Though “The Christmas Carrolls” isn’t quite as LOL funny as “Father Christmas” or “Christmas Wishes” – and why isn’t that one available as an ebook yet? It’s darling. – it does have some rapier, dry zingers. It succeeds in firing off all the heroines with men of whom I, and the Earl and Countess, approve. And I can even buy into subverting the succession and halfway believe that they’ll pull it off. I’m glad to see that this, along with several of your other previously published trad regencies, are available as ebooks now for newcomers to discover you and us old timers to revisit old friends. B

→ Jayne
Previous article: REVIEW: Shadow Woman by Linda Howard
Next Post: YA dystopian, YA romance contemporary, a Historical romance, and a must read non fiction