REVIEW: The Book of the Moon: A Guide to Our Closest Neighbor by Maggie Aderin-Pocock

Have you ever wondered if there are seasons on the moon or if space tourism will ever become commonplace? So has Dr. Maggie Aderin-Pocock. In fact, she earned her nickname “Lunatic” because of her deep fascination for all things lunar. In her lucidly written, comprehensive guide to the moon, Aderin-Pocock takes readers on a journey to our closest celestial neighbor, exploring folklore, facts, and future plans.

She begins with the basics, unpacking everything from the moon’s topography and composition to its formation and orbit around the Earth. She travels back in time to track humanity’s relationship with the moon — beliefs held by ancient civilizations, the technology that allowed for the first moon landing, a brief history of moon gazing, and how the moon has influenced culture throughout the years — and then to the future, analyzing the pros and cons of continued space travel and exploration. Throughout the book are sidebars, graphs, and charts to enhance the facts as well as black-and-white illustrations of the moon and stars. The Book of the Moon will be published for the 50th anniversary of the moon landing.

Space exploration and the Moon fascinate me, though I’m not sure I’d go so far as to dub myself a “lunatic” as you have. I’ve loved the fictional 1960s series Fly Me to the Moon which deals with a NASA-esque agency and the astronauts who aim to be at the forefront of space exploration. I’ve also read some books about the actual people who lead the way in space flight. Your non-fiction book looked right up my alley.

As you say, this is a great moment in time for astronomical discoveries – planets, asteroids, distant galaxies and the planets and moons of our own solar system. Technology is allowing scientists to peer both forward and backwards in time. As we celebrate the 50th anniversary of man walking on the moon, it’s a great time to get better acquainted with our closest neighbor.

Scientific Moon facts? This book has got them and you tell them in a succinct way that informs me about them but holds off on it becoming a lecture. There are all kinds of things that are different about the Moon from Earth that future space explorers will need to keep in mind when (I’m going to dispense with the thought of “if”) we go back and perhaps set up colonies. The vast flips in temperature, the length of Moonquakes, the probability of asteroid strikes, and the fact that the Moon’s gravitational fields are lumpy (!) – yep, our future Moon dwellers need to think of more than location, location, location.

I liked your inclusion of the history of Moon gazing and how various cultures have viewed it. Recent discoveries and.interpretations of them might indicate that our ancestors have been recording lunar calendars for tens of thousands of years. The first recorded female name in history was that of an astronomer priestess of the Moon in the Mesopotamian city of Ur and meant “ornament of the heavens.” The ancient Scots might have been tracking the phases of the Moon ten thousand years ago. A few lines from a fragment of one of Sappho’s poems has allowed the probable date on which she wrote it to be calculated – all because she mentioned the Pleiades and when the Moon had set.

Setting up the question “What’s the Moon ever done for us” with the imagery of John Cleese asking it made me laugh. Well, what has it done? A lot more than just tidal changes, is the answer. How about maybe helping life get started on Earth? Or slowing our days down from 5 hours to 24? Or keeping us tilted at just the right angles so the poles don’t end up at the equator? A lot of what the Moon does for us makes the potential effects of climate change look like a balmy, happy day in the park in comparison.

Of course the fact that the Moon is slowly pulling away from Earth means that eventually our spin will slow down even more to the point that we might have 144 hour days. But not for about a billion years. Thanks for including information about how to Moon gaze: what to see and look for and when in the Moon’s cycle to do that. Oh and what newbie Moon gazers need to get a good look at the highlands and maria that Galileo and others observed.

Where are we going in terms of lunar landings? Several countries are sending probes and rovers to discover more about the Moon with China, Japan and India joining the US, Russia and EU. Cash prizes are also being offered to spur private companies along. What might we do when we get back to the Moon? Well, there’s tourism or using lunar colonies as learning centers to springboard us to Mars. Of course details on who gets to do what and how to keep hostile intents in check or to manage Moon exploitation must be hammered out in international treaties.

“I really believe that if the political leaders of the world could see their planet from a distance of 100,000 miles their outlook could be fundamentally changed. That all-important border would be invisible, that noisy argument silenced. The tiny globe would continue to turn, serenely ignoring its subdivisions, presenting a unified façade that would cry out for unified understanding, for homogeneous treatment. The earth must become as it appears: blue and white, not capitalist or Communist; blue and white, not rich or poor; blue and white, not envious or envied.”

Thanks for a fun little book packed with information that I can use to help me better understand our Moon. It makes me wish I could reach out during a phase when the Moon appears to be close enough to touch and pat it, gently, to say thanks. And congratulations for not allowing dyslexia to keep you from your dream of astronomy or writing it. B 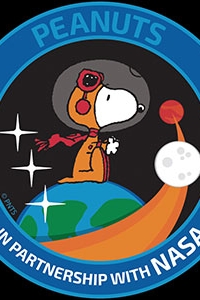 To go along with this review, here’s a cute post about NASA and Peanuts.The space agency and Schultz’s characters have a long history together with the lunar module of Apollo 10 being named after that fearless pilot Snoopy and the Silver Snoopy safety award being given by astronauts to those who have contributed to safety or mission success. Now the collaboration is being carried further to help further the exploration of space.

NASA and Peanuts Worldwide are joining forces to collaborate on educational activities that share the excitement of science, technology, engineering and math (STEM) with the next generation of explorers and thinkers. The collaboration, formalized though a Space Act Agreement, provides an opportunity to update the Snoopy character by Charles M. Schulz, for space-themed programming with content about NASA’s deep space exploration missions, 50 years after its initial collaboration began during the Apollo era.

“NASA’s venturing to the Moon and beyond with new missions that will push humanity’s reach farther into deep space,” said Mark Geyer, director of NASA’s Johnson Space Center in Houston, who signed the agreement on the agency’s behalf. “Engaging the public and sharing what we’re doing through partnerships with organizations that have a unique way of reaching people helps generate interest and curiosity about space in the next generation.”

With NASA’s involvement, Peanuts will work on content for Astronaut Snoopy, including a STEM-based curriculum for students about America’s deep space exploration objectives and interactive ways to celebrate next year’s 50th anniversary of humans first setting foot on the Moon. Peanuts will begin sharing its updated space-themed activities at the Comic-Con International: San Diego conference in July. 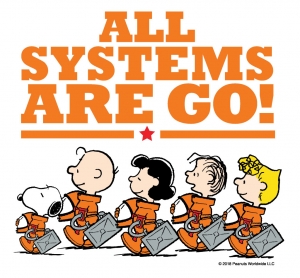 → Jayne
Previous article: REVIEW: A Chip and a Chair (Seven of Spades #5) by Cordelia Kingsbridge
Next Post: REVIEW x 2: Caressed by Ice by Nalini Singh