REVIEW: The Adoration of Jenna Fox by Mary E. Pearson 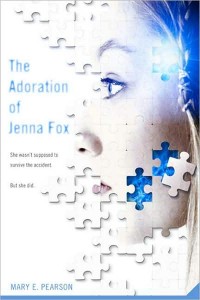 I first heard about your YA novel, The Adoration of Jenna Fox, last December during the Smugglivus event on The Book Smugglers blog. Author Nalini Singh did a guest post recapping her favorite books read in 2009. Her description of the book was brief but, combined with the hardcover's eyecatching cover and with the fact that I've enjoyed several Singh books, it intrigued me enough to look up your novel, and after reading a longer description, I purchased the ebook.

I used to be someone.

More. But I am not sure what.

"Jenna, come sit over here. You don't want to miss this." The woman I am supposed to call Mother pats the cushion next to her. "Come," she says again.

"This is an historic moment," she says. She puts her arm around me and squeezes. I lift the corner of my mouth. Then the other: a smile. Because I know I am supposed to. It is what she wants.

"It's a first," she says. "We never had a woman president of Nigerian descent before."

"A first," I say. I watch the monitor. I watch Mother's face. I've only just learned how to smile. I don't know how to match her other expressions. I should.

"Mom, come sit with us," she calls out toward the kitchen. "It's about to start."

I know she won't come. She doesn't like me. I don't know how I know. Her face is as plain and expressionless to me as everyone else's. It is not her face. It is something else.

"I'm doing a few dishes. I'll watch from the monitor in here," she calls back.

She comes and stands in the arched doorway. She looks at Mother. They exchange an expression I try to understand. Mother's face drops into her hands. "She's your nana, Jenna. You've always called her Nana."

"That's all right. She can call me Lily," she says and sits down on the other side of Mother.

So begins The Adoration of Jenna Fox, an eerie, unsettling novel told from the viewpoint of a seventeen year old girl who has just awakened from a year and a half long coma.

There is a mystery surrounding her which Jenna feels the need to solve. But how can she do so when she lacks almost all memories of her former life, and of things as basic as words? She begins by looking up word definitions.

At her mother's request, Jenna begins to watch recordings of her previous life. She discovers that Jenna Fox was adored by her parents, a beloved only child. The Jenna Fox on the discs physically resembles the Jenna who watches them, but on the inside Jenna feels like a different — curiously so — person.

She can remember and recite historical facts, and yet she feels disconnected from her own history. And then there is the way her grandmother, Lily, keeps her at arms' length and the way her parents conceal things from her. Jenna doesn't love her mother, but when her mother tells her to go to her room she is helpless to do anything else.

Things come to a head when Jenna begins to remember. She remembers that before her accident, when she and her parents lived in Boston, she used to go to school and have friends. Two friends in particular stand out in her mind, Kara and Locke. Where are they now? What's happened to them in the time Jenna was comatose?

Jenna insists that her parents allow her to attend school, and eventually her parents cave. Jenna can go to a special school, which has only four other students.

Once there, Jenna discovers that her fellow students all have reasons for attend such a small school. Dane, who calls the others freaks, is lacking in empathy and humanity, but Jenna is nonetheless drawn to his blunt honesty. Allys, who uses artificial limbs because she suffered a bacterial infection and was not able to obtain the restricted antibiotics, has a special interest in bioethics. And then there is Ethan, who seems to feel too much, who is rumored to have done something terrible, and who shows Jenna the understanding that she craves.

Who can Jenna trust in her search for the truth? Dane, who will not soften his words but who may do her harm? Lily, once her adoring grandmother and now a skeptic where anything Jenna does or says is concerned? Ethan, who cares for Jenna but whom she may inadvertently hurt? Her parents, who claim to love Jenna unconditionally but who sometimes make Jenna feel imprisoned?

The Adoration of Jenna Fox is a disquieting, genre-bending novel. It is equal parts science fiction thriller and family drama, with a little bit of YA romance and coming-of-age story added into the mix.

This novel is character-driven and almost all the suspense comes from the characters. How will they react? What will they reveal? And how will Jenna react to the knowledge she uncovers? There aren't any car chases or guns drawn in this book and yet the suspense never dissipates.

One of the reasons why is that Jenna is fascinating protagonist. She is both similar to and at the same time, utterly different from a typical teenage girl. At first she is a mystery, not just to the reader, but also to herself. Who is she? What is she? These questions consume Jenna and they also kept me turning the pages.

But even though Jenna was clearly unusual and odd, she also had a core of longings that I could relate to – the needs to be known and understood, loved and accepted – and it was this core that made me care about her and fear for her.

As for the other characters in the story, they felt very real to me. They too were compelling and sometimes mysterious, but most of the time, I could understand what motivated them, even when I also understood why Jenna was at odds with some of them. My one complaint about the side characters is that every single one highlighted something about the novel's themes, to such a degree that when the characters are taken together, this sometimes felt artificial, though as people they themselves did not.

One of the highlights of this book was the language. The writing was simple and spare, but at the same time, amazingly effective at conjuring an ominous sense of danger and a disturbing, eerie feeling. Each time I picked up the book I was sucked in, while every break I took from reading made me think about Jenna and dread what she might discover and what might happen to her.

The book ends with an epilogue that I'm of two minds about, because it raises almost as many questions as it answers. But I love the final image with which The Adoration of Jenna Fox closes, and I will definitely be reading more of your work in the future. B+.