I’m a longtime reader of your Psy/Changeling series and love the Arrows, so requesting an ARC of Shards of Hope was an easy decision for me. Shards of Hope centers on Aden Kai, the leader of the Arrows, and on one of his senior officers, Zaira Neve. 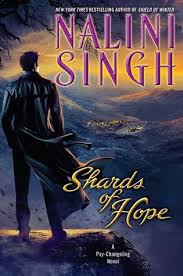 I loved the back cover copy plot description for this book, but it’s a little misleading:

Awakening wounded in a darkened cell, their psychic abilities blocked, Aden and Zaira know they must escape. But when the lethal soldiers break free from their mysterious prison, they find themselves in a harsh, inhospitable landscape far from civilization. Their only hope for survival is to make it to the hidden home of a predatory changeling pack that doesn’t welcome outsiders.

And they must survive. A shadowy enemy has put a target on the back of the Arrow squad, an enemy that cannot be permitted to succeed in its deadly campaign. Aden will cross any line to keep his people safe for this new future, where even an assassin might have hope of a life beyond blood and death and pain. Zaira has no such hope. She knows she’s too damaged to return from the abyss. Her driving goal is to protect Aden, protect the only person who has ever come back for her no matter what.

This time, even Aden’s passionate determination may not be enough—because the emotionless chill of Silence existed for a reason. For the violent, and the insane, and the irreparably broken…like Zaira.

The blurb makes it sound like Aden and Zaira spend a lot of time alone trying to survive an inhospitable landscape but that’s actually only 13% of the book.

Aden awakens to discover he and Zaira are captive in strange surroundings. Zaira was badly injured during her capture and after helping Aden eliminate their guards, she begs him to abandon her so that she won’t slow down his escape. Of course, Aden being Aden, he refuses to listen.

While on the run, Aden and Zaira also discover their brains have been implanted with devices that block their connection to the PsyNet, and that these implants must be removed before they’re used to kill them. By the time Aden and Zaira stumble into the territory of a local changeling pack, both are in bad condition.

In the pack’s territory, Aden and Zaira have a chance to recover. But they are still cut off from the PsyNet, and for Zaira, this is terribly dangerous. Horribly abused and isolated as a child, Zaira is in desperate need of connection, so she and Aden use physical contact to anchor her.

But that very contact brings up the romantic feelings she’s had for Aden since they were both very young. And these emotions, too, are dangerous, because Zaira has buried and trapped so much anger inside her, and letting go of Silence means letting what she calls her “rage creature” escape her control. She fears turning into a monster, becoming too possessive and killing anyone Aden cares for.

Eventually, Aden and Zaira return home, to the Arrow facilities, but they still don’t know who kidnapped them, or why.

Meanwhile, a psychopathic Arrow named Blake has received a message tempting him to go on the hunt…and he has decided to involve a young person in his crimes.

Zaira and Aden both want a different kind of childhood for the child Arrows in their care than the one they had. But that means not just providing safety and security, but also teaching the children that it’s okay to express emotions, and being a power of example to the rest of the squad.

Aden, who has loved her for years, wants nothing more than to make Zaira his own. Zaira loves Aden back but she doesn’t know if she can handle a relationship. She would die for him, but can she allow herself to be fully alive to every emotion the thought of him brings?

There is a lot of focus on the romantic relationship in this book, something I have been wanting for a while. Shards of Hope has a conflict that isn’t about the romance as well, but it’s not one that has been built up for multiple books like the Psy/Changeling War, the fall of Silence, or the virus in the PsyNet, so up until the climactic confrontation that external conflict was less exciting than in some of the more recent books. If the tradeoff is more romantic relationship focus, I’m not sure I mind.

I liked many things about this book, starting with both of the main characters as individuals. Aden we already know, but here we really see him shine as a leader, as well as get to know how compassionate and caring he is where Zaira is concerned.

And Zaira is really cool. She has a Jordanian background, yay for that. And she is resilient, spirited and strong. As a child, Zaira survived her abusive parents and then escaped that horror by killing them at age seven. This led to her recruitment into the Arrow squad. Zaira fears what she calls her suppressed “rage creature,” but Aden sees it as a sign of her indomitable spirit.

There’s a nice backstory and even a few flashbacks to Zaira and Aden’s childhoods that show how Aden helped Zaira survive captivity — her biggest demon — as a child. There was always a connection between them, but their kidnapping brings these feelings to the fore.

I really liked the gender role switch in this romance. For a change, Zaira is the possessive / protective / emotionally wounded badass, while Aden is the one who has his act together emotionally and is trying to help her and other Arrows heal.

That is not to say that Aden doesn’t have power — his secret ability is revealed and I won’t spoil it but it’s something really, really cool.

We also learn more about the BlackSea changelings and see more of them in this book.

There were some wonderful, though very brief, scenes with Nikita/Sascha and Nikita/Anthony, too.

And I thought it was really, really cute (and perhaps a nod to the hint of m/m in the Aden/Vasic relationship) that Zaira was at first a little jealous of Vasic.

What I liked less:

For some reason — maybe because there was so much focus on the Arrow squad internal politics and caring for the Arrow kids, I didn’t feel the chemistry between this couple as much as I wanted to. It’s exactly the opposite issue from the one I had with the previous book. I felt that Vasic and Ivy could have been more believable characters, but had great chemistry together. In this one, I loved Aden, and I loved Zaira, and I liked them together but the chemistry wasn’t as potent.

We’re told a lot that Aden takes care of everyone but himself and needs someone like Zaira to force him to rest, but we weren’t actually shown him working himself to the bone, or Zaira insisting he rest against his own inclinations to the contrary. Maybe if it had been shown instead of just told, I would have felt their chemistry more.

Shards of Hope introduced a number of new child characters, at least five I can think of. I wondered if so many were necessary; I think I might have been more invested in the fate of the Arrow squad had the focus on protecting and rescuing of children been portrayed through two or three of these new characters.

I also wished Aden’s secret ability had been revealed earlier in the book because it’s SO COOL. I have the feeling that what we’ve seen in this book is only the tip of the iceberg in terms of what he can do.

Additionally, I wanted Zaira’s own psychic ability to be more interesting and to be used more, but her physical fight capabilities made up for it some.

In the last scene of the book there were some political developments with regard to the Ruling Coalition and some of the other political groups in this world, and frankly, these bored me. The conflict between the Psy and the changelings had some problematic aspects, but I wonder what the future of the series holds, now that a lot of the tensions between different sides are dissolving.

All in all, Shards of Hope was an entertaining addition to the series, and I’m looking forward to book fifteen. This one gets a B.