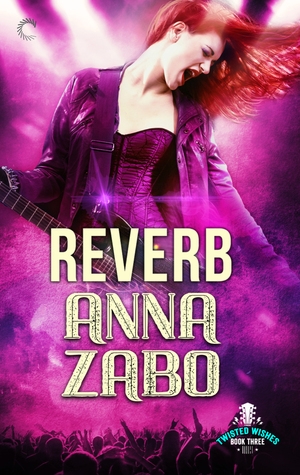 I have a number your books on my TBR but this one is the first I’ve read. It definitely won’t be the last.

Reverb is the third book in the Twisted Wishes series (named after the rock band to at least one of the main characters in each book belongs). While it isn’t necessary to have read the earlier books to understand Reverb, there are some spoilers for previous books (particularly book one) which may mean that at least some readers will want to read in series order. For me, spoilers don’t bother me that much and reading Reverb made me want to go back and read Syncopation and Counterpoint.

What attracted me most to Reverb was that it’s a bodyguard/rock star-with-a-stalker trope and I love a rescue story. Added to that, the bodyguard is a trans man and I have only read (and not enough of them) trans women characters before so I wanted to start to do something about that.

Mish Sullivan is the bass player for Twisted Wishes and she has a stalker. She’s unhappy about it for a lot of reasons. Apart from the obvious, she is fiercely independent and sees herself as the caretaker of the band in many ways. Having someone looking out for her, overtly at least, makes her uncomfortable. Still, she is unable to come up with any reasonable excuse for the band not to hire security.

David Altet is former military and a current private security operator, providing bodyguard and personal security services to business people and musicians on a contract basis. He is hired to provide security for the band (but in reality, mainly for Mish) for the duration of their upcoming tour. While Mish is still grumbly about the idea of needing someone to protect her (she is a fierce badass who can look after herself after all) she is nonetheless immediately attracted to David.

For his part, David is stunned by everything that is Mish and knows he’s in trouble immediately. He’s concerned that developing personal feelings for Mish will adversely impact his professional responsibility. That he’ll be too busy looking at Mish to look out for her the way he should. However, Twisted Wishes operate more like a family than anything else and for them, personal relationships are features not bugs. They tend to believe that David caring for Mish will make him more careful, not less. Even as Mish and David give in to the powerful attraction between them, David remains concerned he might drop the ball and it’s a concern for him throughout the story. I liked that it wasn’t glossed over or hand-waved away and band’s reasoning made sense, as did David’s fears.

David does take his job very seriously and is a good employee. When he thinks he may have overstepped or made a mistake, he doesn’t try to cover it up. He will immediately go to the band’s manager, Marcella or whoever is relevant and discuss it. He’s mature and smart and I liked his competence. There are a few things he feels he should have done better and you did a good job of showing why he felt the way he did but also that he was perhaps beating himself up unfairly.

David has some other things about him that I loved and was happy to see. He’s 43  to Mish’s 32 (if my maths are right). He’s far from old but I liked that his age matched his experience and expertise instead of him being some kind of wunderkind. He’s also 5’9″ and Mish is about four inches taller and I loved that it wasn’t a big deal. He was no less competent or impressive for being under the apparent romance ideal of six feet plus.

I loved the way you talked about David. He is presented as not needing any special explanations – and he doesn’t. I admit I looked a few things up via trans-friendly websites because I was curious and/or they were unfamiliar to me. It wasn’t a big effort and I didn’t in the least mind doing it. I liked that you trust readers to understand or go and find out themselves. Reverb is primarily a romance novel, not a text book or teaching material.

(Although, near the end, Mish thinks some profound thoughts about how love can’t fix someone’s problems. I did find that part a little didactic.)

That said, there is one teaching moment in the book I really appreciated.

He veered away, but she caught up with him easily. “Mr. Altet!”

That question brought her up short. “Well, yes. What else would it be?” She paused. “I suppose Mrs.”

He shrugged, glad to have the upper hand. “Could be Mx. if you’re non-binary. Or Mr.”

“All right. Then what can I do for you, Ms. Heydel?

It wasn’t heavy-handed at all even though teaching was what David was explicitly doing. I liked the end response from the Ms. Heydel too, as she clearly took on board what David was saying.

Mish and David are very good together. From very early on, they connect and understand each other. David is confident in his gender identity and isn’t phased by Mish taking the lead – in bed or on the dance floor. Though they mix things up – Mish is just as happy taking David’s lead and their relationship has a wonderful equality to it which works on an organic level.

Mish is a wonderful character as well. Confident in her talents, musical ability and her sexuality, she’s as kind and generous as she is fierce. I loved watching her grow musically as the book progressed too and my sense was that Twisted Wishes are a better band with more potential for being open changing things up.

There was one thing which I struggled to get used to. It’s very much a personal preference, perhaps it could even be called a tic, but I don’t love when the small words at the beginnings of sentences are missing.

God, that outfit was pure sin on him. Jeans faded in just the right way to emphasize the power of his legs and thighs, and one of those blue patterned button-downs guys seemed to like. Leather necklace. Wasn’t designer anything, but David still looked like a GQ model with that dark hair and those darker eyes.

“Wanted to check in with you before we got going…”

I get that people often speak this way but in writing, I’m something of a purist. I did get used to it a little by the end of the book but I admit my instinct is to mentally insert “it” or “that” or “I” or whatever word my brain considers is missing before I can move on and it was something of a distraction for me.

Mish and David fit together so well, and David quickly also finds a place within the family that is Twisted Wishes. But for all that David is comfortable in his body, he’s also a bit scared that he will lose his identity if he and Mish stay together. As he says, he’s “fought his entire life to be me” and he won’t give that up for anyone or anything. To get their HEA (and they do) David will have to reconcile how he can be himself without being alone – something he’s not been able to do before.

I enjoyed the interactions of the other band members and Marcella (their manager) with both David and Mish and I liked the balance of the romance to suspense in the book as well. Now I have to see about picking up the earlier two books because I’d like to know more about Ray and Zav and Adrian and Dom.