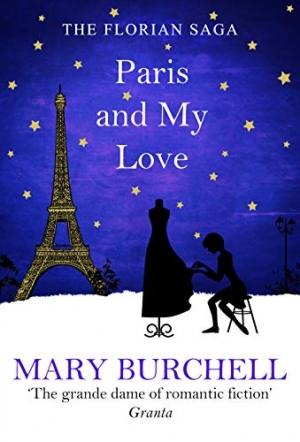 Marianne was young, she was in Paris – that perfect setting for romance-and she was in love with Nat. The only snag was that she was not at all sure of Nat’s feelings for her. Did he have any more than a brotherly affection for her? Could she possibly hope for more in the face of the very stiff competition provided by the glamorous Lisette? It was a good job, Marianne reflected, that she had nice kind Roger Senloe to turn to and to advise her.

Yippee – it’s out in digital now! Pay attention to the title as it sets the order of importance of both things in the story.

Marianne is another British woman fleeing heartbreak in England by heading across the Channel to Paris. Unlike Gabrielle in “Under the Stars of Paris” it wasn’t her own fiancé acting a cad. Marianne has been hopelessly in love with her sister’s fiancé Nat (ugh, what a name) and when sister Yvonne calls it off, and Nat goes to Paris, Marianne follows him with the idea of finally snagging him. But living in Paris isn’t cheap and a job is needed.

Having worked in the exclusive fashion stores of London, she thinks to try her luck at being hired by one of the Parisian fashion houses and what better one than Florian’s. Quickly disillusioned as to her suitability as a mannequin (remember mannequins were the women wearing the haute couture while the dresses are the models) by the superior Directrice of the Salon, Marianne is fortunate that The Man himself happens to pass by and listens to her appeals to join the House in some capacity. She might not be mannequin material but her references and selling ability secure Marianne a place in the smaller accessories boutique. Employment obtained, Marianne is sure that she’ll be able to contact Nat and finally kick-start a romance.

It’s too bad that a waspishly behaving mannequin also set her sights on Nat and Lisette is the type to lie, cheat and steal to get what she wants. Or to throw up barriers in the path of a potential rival. Devastated by the fact that Nat is taking Lisette out to dinner at a charming little place frequented by foreigners, Marianne flees into the night and is found crying on a bench by the river by a handsome Englishman she recalls seeing at Florian.

Poor Roger came in in second place in “Stars” and is still in Paris doing his diplomatic thing while remaining friends with Florian and Gabrielle. He’s the type to see a woman crying and try to be helpful. He also listens well and hears out Marianne’s story of her unrequited love for the unfortunately named Nat. Nat meanwhile moves around in cheerful ignorance of Marianne’s true feelings because she’s never told him how she feels.

Lisette knows though and proceeds to act up, say nasty things (or as nasty as Burchell seems willing to have a character be) and stir up anything to discredit Marianne. Only Nat seems oblivious to all this. Monsieur Florian gets several chances to act the fashion fairy godfather all the while launching his latest collection to gasps of delight from fashion devotees – some of whom kill each other with kindness at the shows. The two directrices of the House – one in the Salon and the other in the boutique – are also icily polite in that way that indicates just how much they dislike each other.

Meanwhile Marianne gets to know a squashed cabbage of a vendeuse with whom she works and is given the chance by Burchell to show us just how much kinder she is than that beautiful heifer Lisette. Will Marianne finally get the man she’s been mooning over? Will Lisette stir up enough sh!t to finally get something to stick against Marianne? Will Georges Florian get his latest gorgeous clothes launched in between arranging the love life of his newest employee? And what will Marianne do when the scales finally fall from her eyes?

What I like best here is that Marianne isn’t spineless. She is suitably awed to be working in this major fashion House but when she needs to speak up for herself or another, she does. This impresses M. Florian just as it did when Gabrielle once stood up to him. As his beloved wife of five years reminds him, honesty is a rare thing in this world.

The romance toddles along though Burchell makes sure we see Roger being kind and decisive in defense of Marianne and more than willing to listen to her troubles. Marianne finds that she discovers in Roger all the traits she wants to see in Nat. Lisette is a bit of a one dimensional character without even the voice of Peroni – who sings again at the opera – to justify herself. Oh and Roger knows all the quiet little dinner places to take Marianne that are unpretentious yet serve superb food. This is, after all, Paris. I nearly forgot, I want the Florians’ lux penthouse apartment too.

It isn’t quite as good as “Stars” but “Paris – and My Love” is a nice follow-up that takes us again to the world of high fashion and the demanding man who rules the House of Florian while also negligently managing a romance. He also gets to clear his conscience about getting the girl at Roger’s expense the first time around. I wish there had been a bit more romance but, it is what it is. B