REVIEW: Out of Character by Annabeth Albert 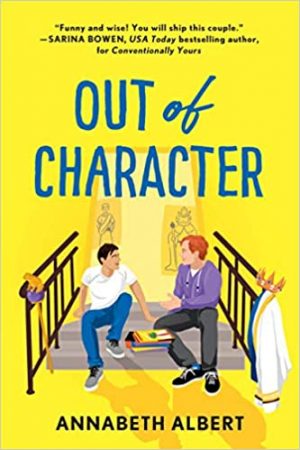 Considering I’m not the biggest fan of the enemies to lovers trope, it is perhaps surprising that the last two books I’ve read have featured it – and that I enjoyed them both.  There’s a specific way this trope can work for me however and in each case, luckily enough for me, it did.

Out of Character is perhaps unusual because it’s actually a friends to enemies, enemies to friends to lovers trope. Milo and Jasper were childhood friends. They grew up together, hung out as kids and young teens. But it all changed when they hit high school. Jasper was a proud member of the Gay Straight Alliance and was starting to come out; Milo got a spot on the junior varsity soccer team and a shot at varsity, Jasper hung out with the “nerds” and Milo was becoming a jock. Milo’s father also had a part to play in his behaviour with a particularly toxic version of masculinity that made Milo long for conformity, heteronormativity and to be “one of the boys”.  Unfortunately for Jasper, the soccer jocks were also the mean guys, bullying and belittling the nerds every chance they got.  And Milo…did nothing. He didn’t actively participate in the sledging but neither did he ever stand up for Jasper. As a consequence they stopped hanging out and for the last 12 years, they have not been friends.

Jasper still feels the pain of that loss and the sting of hurt from the betrayal of a friend.

I think it’s a common experience, at least once in a child’s life, to be faced with a choice of sticking up for someone weaker than themselves and risk ostracism or staying silent – or worse, participating in the bullying so as not to become one of the bullied. Milo failed Jasper – more than once but I understood, even while I didn’t approve (and truthfully there are things in my own past behaviour I look back on with disapproval and not all of them were when I was a child). It did help me to believe in their eventual HEA that Milo was not an active participant in the bullying – that would have been a much harder sell for me but I suppose the mileage of other readers will vary on that.

In any event, the young men are now in their early 20’s. Jasper is in his final semester of college and life is about to change again – he faces the prospect of moving to New York after graduation, away from his family and, even while it’s all exciting – probably – it’s also very scary. Things haven’t gone so well for Milo. He didn’t have the same kind of “book smarts” that Jasper did. He went to college on a soccer scholarship. He has an undiagnosed learning disability (perhaps a processing disorder?) and is not lacking in intellect but he never did particularly well with academics. After an accident led to him getting kicked off the  soccer team, he lost his scholarship and he is now working a low paying janitorial job and trying to pay his brother back for the associated medical bills. He’s unhappy with his life and desperately wants things to be different. He wants to be different.

And then he does another dumb thing (his words). His brother, a marine deployed in Afghanistan, left him with his treasured collection of Odyssey game cards. And Milo lost the 4 rare “Frog Court” cards which are worth upward of $10,000 on the secondary trading market. Desperate to try and locate some replacements somehow before his brother comes home and sees yet again how disappointing Milo is, he turns to the only person he knows who may be able to help – Jasper.

At first Jasper is not inclined for forgive and forget. Milo and go jump in the lake. But as it happens, the Odyssey cosplay group Jasper is involved in needs a new “Prince Neptune” and Milo is perfect for the role. Jasper’s younger sister, April, is also part of the group. She has an immune disorder which has meant she has missed out on many things in her young life and Jasper wants to take any opportunity he can to make life better for her, to be her hero. So he bends and agrees to help Milo – if Milo will don the toga and crown and visit the sick kids at the hospital with the group.

That is the beginning of the pair getting to know one another again. Both have grown up and changed over the years since when they were friends. Milo does not like (never has in fact) being the centre of attention. He prefers to slide under the radar and so, for him, playing Prince Neptune is particularly confronting. But he quickly finds the trade off is worth it. He gets to spend time with Jasper again and boy howdy has he missed that. He also meets Jasper’s friends and longs to be part of their group. Milo’s own “friends” are of the shitty variety; unreliable and not very nice, not actually friends in fact. But Milo feels otherwise alone. He’s living in a crappy apartment with his shitty friends and if he decides not to be friends with them anymore he’s effectively homeless. Making changes is not just a simple matter of attitude and belief. There are concrete things which follow from his choices and some of them he just can’t afford to make right now.

As Milo and Jasper become friends again, as Milo is absorbed into Jasper’s friend group, comes out to Jasper and then others in in his orbit, as he steps into the man he wants to be, the pair also continue the search for replacement Frog Court cards on a shoestring budget and continue with the cosplay (thus ensuring the pair spend a lot of time together – yay!). And of course – this is a romance – a latent attraction comes to the fore and they also become lovers.

Early on, Milo quickly and sincerely apologises to Jasper for his behaviour in high school. He takes responsibility and does not make excuses. In fact, over the course of the book he beats himself up so spectacularly there’s little point in Jasper ever piling on. In some respects it was occasionally wearing. But Milo is aware Jasper is taking a risk on him.

“…I don’t want to be mean ever again.”His expression sobered before he brushed a soft kiss over my mouth. “I believe you. Even though I probably shouldn’t. But I want to believe that you’ve changed.”“I have. I am. Feels like one of those videos where they go from black and white to color to make a point. Like…the old me didn’t even have a clue as to how much he was missing, not really. But now I’ve seen what could be possible, and there’s no way I want to go back to a grayscale life.”

Will Milo fail when it comes to the test – as it inevitably must? Will Jasper’s need to be someone’s hero mean he overlooks things he shouldn’t?

The book deals with some heavy topics – bullying, homophobia, toxic masculinity, a level of emotional abuse from Milo’s father to Milo, death of a parent, serious illness of a sibling – but ultimately it is not a particularly angsty story. Jasper and Milo find their way to one another organically and without a lot of drama. They do have things to work through but they largely do that together.

The story is told in alternating POV 1st person chapters but there was little difference in the voice of each. I did find myself checking from time to time just whose POV I was in – but otherwise, the book was engaging and sweet, a little fluffy even but with a nice amount of spice to heat things up.

→ Kaetrin
Previous article: REVIEW: Someone to Cherish by Mary Balogh
Next Post: REVIEW: The Jasmine Throne by Tasha Suri