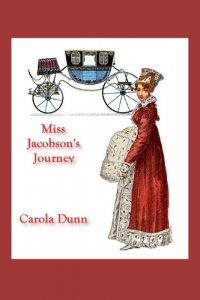 Having refused the man her parents chose for her, Miriam Jacobson opts to travel the Continent assisting her physician uncle, but when her uncle dies, she finds herself smuggling gold across Napoleon’s France to Wellington in Spain, accompanied by two attractive young men, both of whom detest her—and each other. High adventure and romance in the best Regency tradition.

I first read “Miss Jacobson’s Journey” eons ago (in Internet terms) when I (triumphantly) managed to get my hands on an OOP paperback copy. This was back when Jewish characters were hard(er) to find in historical romances. Today it’s a tad bit easier but I had fond memories of the book and wanted to reread it now that it’s available digitally. I still enjoyed smart and courageous, yet not anachronistic, Miriam without whose help, the whole plan that drives the novel would have fallen apart in the early stages. But I have to admit some disappointment this time in the Jewish representation.

Miriam is a young seventeen year old, fresh from the schoolroom with visions of being asked to balls and dancing with handsome young men of Polite Society (after all, she did attend a [maybe not quite so select] academy for rich young [goy] ladies) when her parents contact the matchmaker. She’s already annoyed at the whole thing when her intended arrives. Horrified at what she sees, Miriam scandalizes her family and insults the young man when she hysterically announces she’s leaving for Europe with her Uncle, a doctor.

Now years later her Uncle Amos is dead and Miriam along with her nurse / companion / chaperon Hannah are traveling through France and trying to find a way to get back to England. Miriam has enjoyed her years of travel and experiences and has picked up some languages along the way but it’s time to get home and maybe, she hopes, find a husband and start a family. But there’s one more adventure ahead of her. Her traveling acumen and knowledge of French and Spanish are needed to help the war effort. As a loyal Englishwoman, Miriam can’t turn down the request. When she’s introduced to the two men who will be on the journey with her, Miriam knows why one man looks down on her but why does the other obviously dislike her, too?

Regency fans and those who know something about the Peninsular Wars probably already know the story behind the plot. From reading other people’s thoughts on the book I have a few cautions. This is an older “trad regency” book so it doesn’t have any sex scenes. There are a few kisses – some with a lot of feeling behind them – but other than that it’s tame compared to what is being written now. The plot sort of has a bit of a love triangle to it though it’s fairly clear with whom Miriam will end up.

I was also a bit confused about Miriam’s knowledge of the Jewish faith. Early in the book, she ponders how her parents’ generation has raced to take advantage of tolerance and the opening of opportunities to Jews while simultaneously forgoing teaching their children much about their faith. Miriam knows about kosher foods – though both she and Isaac admit that in their continental travels they’ve often had to make allowances based on what is available (and do so in this book) as well as avoiding drawing attention to themselves. She can explain Passover to Felix. However she has to ask Isaac other questions such as what a mezuzah is. Huh? That, at least, I thought she’d know about even if she isn’t a Talmudic scholar.

Still, the adventure part of the book is great. It’s in the middle of a war but we see the journey through France and how not everyone wholeheartedly supported Napoleon. The Army requisitions what they need from the French people with little concern for the impact on poor peasants, smuggling between France and England is still going strong, there is tension and infighting between various government officials, and the Basques don’t feel themselves to be a part of either France or Spain. Our travelers must always be on guard which is made more difficult by the fact that initially one of them speaks almost no French. Miriam, Isaac, and Hannah also must (initially) listen to Felix’s anti-Semitic comments and insults. A few of these are reiterated by French government officials later on.

The action is split between our intrepid band making it safely to and across the Pyrenees as well as the romantic tensions as Miriam must deal with two men who start out disliking her only to change their minds as she works to engender a truce between them. Sharp spoken Hannah isn’t afraid to let her opinions be known and none of them seems to like garlic in their food (sacrilege!). The change in their feelings is slow and understated but by the end, a happy ever after is found with both heroine and hero being quietly sure that the time is right and This is the One. B

→ Jayne
Previous article: REVIEW: The Hidden Palace: A Novel of the Golem and the Jinni by Helene Wecker
Next Post: REVIEW: The Ship of Stolen Words by Fran Wilde