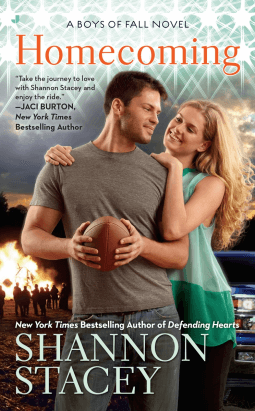 They were the golden boys of fall: Stewart Mills High School’s legendary championship football team. Fourteen years later, they’re back to relive their glory, save the team—and find themselves again . . .

Sam Leavitt has two goals when he returns home to Stewart Mills to fill in for Coach McDonnell: to keep the school from finding a permanent replacement while Coach gets back on his feet, and to reconnect with his mother. As substitute coach for the high school football team, Sam must work hard to keep the boys on track, and that means spending time with the sexy guidance counselor he shared a hot night with months ago.

Jen Cooper knows what she’s looking for, and it’s not Sam—he wasn’t even supposed to come back. She wants a cultured, romantic soul, not some rough-around-the-edges guy with calloused hands—and a hard, muscular body. But seeing him every day forces Jen to question what she really wants out of life. And as Sam begins to deal with his past, Jen discovers there’s more to him than she imagined.

I wasn’t aware that I was jumping in at the last book of this trilogy but it all turned out okay. So, the third book in series. Past couples are briefly mentioned initially and we discover that Jen and Sam have History – on the hood of her car to be specific and it was hawt and something that haunts both of them. But they’re going to be strong and resist temptation.

Why does Sam agree to return to his hometown, the one he couldn’t wait to flee after school? Obligations to the man who saw something in him then saved him from his alcoholic mother. The coach who taught him what it is to be an honorable man. No, it has nothing at all to do with Jen and her car. Nothing.

Why does Jen not want Sam to come back to town for a while? He’s rough – by which she means his childhood, upbringing and the fact that he skedaddled as soon as he could and pretty much stayed skedaddled x 14 years. Except for the car. Jen wants a white picket fence, children and a minivan. She doubts Sam can deliver despite her friends calling bullshit. With emojis.

Given she’s the school guidance counselor and he’s the football coach on the sidelines wearing a goody polo shirt their chances of avoiding each other are nil. Plus when she offers constructive football criticism during a practice, Sam finds it sexy as hell. I’m loving that Jen the guidance counselor actually uses her skills and knowledge to help the students and Sam. She’s a trained listener and doesn’t just offer platitudes. Especially as Sam deals with health class pumpkin babies crises before the homecoming game.

Sam and Jen can’t stop thinking about sex which people – not only their friends but the whole town – seem to realize. So why fight it? If the town has already decided Sam and Jen are having hot sex then why not actually have it? Life is better with monkey emojis and orgasms. But no warm or fuzzy feelings. This relationship has an expiry date.

I like seeing the “bad boy” hero actually grown up since his bad days. It’s been 14 years after all so a little growth ought to be expected. Now Sam finds himself offering advice where it’s asked for even as he sorts through his own emotional and life baggage. I like that the interactions between Jen and Sam aren’t just sex and that other issues are dealt with as well. It makes the characters and the story much more well rounded. And as both Sam and Jen wrestle with how their feelings have expanded beyond “casual fling” this makes the stakes higher and more real life.

Sam’s journey wasn’t just geographical. It was emotional in many ways as well. He had to make peace with his past, the fact that it wasn’t the town that let him down as a child but his parents, that his mother is working on sobriety, and that someone thought he was worth offering a job to. Then he had to figure out how much all this meant to him in relation to being with the woman he loves and who loves him. I like that – it took a little while but finally – he and Jen discuss a future together and what their feelings mean and work out a plan. B

And I want this macaroni salad recipe that Jen and her friends swear by as comfort food.

→ Jayne
Previous article: Friday News: PRH earnings down, you can still complain on Yelp, Amalgam Comics, and a robotic vagina
Next Post: The Girl with All the Gifts by M.R. Carey