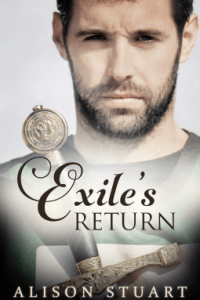 England, 1659: Following the death of Cromwell, a new king is poised to ascend the throne of England. One by one, those once loyal to the crown begin to return …

Imprisoned, exiled and tortured, fugitive Daniel Lovell returns to England, determined to kill the man who murdered his father. But his plans for revenge must wait, as the King has one last mission for him.

Agnes Fletcher’s lover is dead, and when his two orphaned children are torn from her care by their scheming guardian, she finds herself alone and devastated by the loss. Unwilling to give up, Agnes desperately seeks anyone willing to accompany her on a perilous journey to save the children and return them to her care. She didn’t plan on meeting the infamous Daniel Lovell. She didn’t plan on falling in love.

Thrown together with separate quests – and competing obligations – Daniel and Agnes make their way from London to the English countryside, danger at every turn. When they are finally given the opportunity to seize everything they ever hoped for, will they find the peace they crave, or will their fledgling love be a final casualty of war?

Of course it was a foregone conclusion I’d want to read this final book in your Parliamentarian/Restoration trilogy. The King’s return might be within sight but issues remain and going home will not be easy for those who have suffered long, seen loved ones die and lost much that can never be replaced. But there are wheels within wheels and intricate plots and political maneuverings that baffle the mind, never mind those with hidden agendas. At this point in his life, Daniel has suffered much for his King and it’s time he got something in return. It might offend some but his experiences have turned Daniel into a cold, hard pragmatist. Frankly, I can’t blame him. Meanwhile, Agnes is a woman alone in the world – a man’s world in which women have little power or authority.

Agnes is convinced before she even starts her journey with Daniel that he’s got something to hide. After he tells her a bit – just a bit, mind – about his past, her fears are confirmed. But with no other choice open to her to get her beloved niece and nephew back from a man who has little reason to ensure they grow up and take over the valuable estate left by their father, needs must when the devil rides. Too bad she knows she’s the one riding with the devil. She also sticks up for herself and is brave enough to venture some questions as to his background – in the face of his equal determination to remain a mystery. His surprise when she pulls out her own pretty, but serviceable!, pistol is worth a great bit of the worry she feels about the whole mess. Daniel also sees that Agnes’s deceased brother taught her a handy thing or two that is useful for a woman alone to know and that a wise man won’t make her angry.

Of course we have early and frequent evidence of Daniel’s basic goodness, despite what the homeless, parentless, urchin whom Daniel condemns to a bath and training as an inn potboy in lieu of starving on the fetid streets of London thinks. Watching Agnes defend herself against footpads, listening to her recitation of her dead family and seeing how alone she is in the world makes Daniel start to worry not only about how his mother and sister will react to the fact that he’s alive but also of what they, as women also alone, have had to face during all the years he’s been gone. His vows of vengeance are all well and good but they aren’t the only things he has to consider anymore.

It’s refreshing that seduction and sexy hasn’t overtaken the plot so far. This book takes me back to Old Skool 1990s historicals when there actually was a plot, especially one that I don’t have to jump through mental hoops to get past all the “wait, would this have happened/been allowed?” that jerks me out of so many books I try today. In fact, I was almost laughing out loud when Daniel succumbs to “marsh fever” and needs to be stripped but squawks and balks at the idea that Agnes will be the one doing the clothing removal. She might have seen a naked man however, as Daniel protests, “but not me!”

Jennie recently mentioned an issue she sometimes has with historical books in which the characters are amazingly advanced in their thoughts on medical care. Not so here! Ah, it’s good old fashioned nursing and medicine. Lady Katherine’s maid – a force of nature – believes strongly in maggots.

Daniel gets more schooling in “how much the affairs of men had impacted the lives of their women.” And how angry or bitter some of these women have become. Will this be what greets him from his own womenfolk? Even the relatively tranquil home he recuperates in shows the signs of the years of neglect during the war. With the probable coming of the King back to England, the demands on his followers will not end, nor will all wrongs be righted and justice might be something some never see delivered in this world.

But the King is not back yet and the best laid plans to find a treasure and reclaim Agnes’s niece and nephew from a man who has every reason to want the child dead soon go haywire in the worst way. There was a point when I was frantically trying to figure out how the day would be saved. Then when things got even worse, I thought, “No way! How…?!” At the point when I’d almost lost all hope, all I could do was take Daniel’s advice to Agnes and keep hoping. The resolution that saved the day was unexpected but neat and knowing one particular character from a previous book, quite in keeping.

There are lots of things I liked about this book. A heroine who grows in strength and confidence to demand what she deserves and hold out for it. A hero who started as a hardened man but gradually thawed when he saw what could be his and didn’t allow himself to sink to the level of his enemy. A country weary of wars, death, destruction and loss. Old wrongs are – for the most part – righted and justice is done. But everyone has suffered and some will live with things that will haunt them. Thanks for not buffing everything to a rosy glow or all the heartaches that had gone before would have been trivialized. This is a great return to the historicals I fondly remember with plots and meaning and emotion. B+