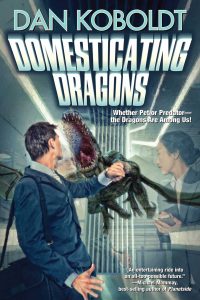 Although highly specialized dragons have been used for industrial purposes for years, Reptilian is desperate to crack the general retail market. By creating a dragon that can be the perfect family pet, Reptilian hopes to put a dragon into every home.

While Noah’s research may help Reptilian create truly domesticated dragons, Noah has a secret goal. With his access to the company’s equipment and resources, Noah plans to slip changes into the dragons’ genetic code, bending the company’s products to another purpose entirely . . .

I just couldn’t resist the idea of reading a book that had me thinking of the favorite mall store in which people can build their own stuffed animal. Build-A-Dragon, however, is a little bit different and a lot more dangerous. It does provide some hilarious owner’s manuals complete with directions and warnings that I bet real company drudges would love to include and there are some customer service recordings that edge from funny, to frightening, to terrifying. Really people, read the directions and use the safety devices or we’re afraid that Reptilian Corporation can not be held responsible for any injuries or deaths from our products.

You should have noticed that your dragon has scales, teeth, and claws. If it didn’t, we probably wouldn’t be able to call it a dragon, would we? In this section, you will learn about how to properly care for these parts of your pet.

Your dragon may molt once every 6-8 months. This is normal. There is no need to mail the molted skin back to the Build-A-Dragon company.

Dental care is vital to keep your Rover model healthy. You should brush his teeth every time that you brush your own. Just don’t use the same toothbrush.

The nails on your dragon’s feet will grow throughout his lifetime. He will use them to dig, scratch, scrape, maim, and climb. If the nails grow too long from disuse, they may become uncomfortable. Provide a scratching post and encourage your Rover to use it instead of walls or furniture. If the nails get too long, you can trim them with the Build-A-Dragon ClawClipper. You can also ask your veterinarian to clip or grind the nails. Good luck with that.

Noah Parker manages to snag an appointment with one of the higher ups in the dragon design department at Rep Corp (no, it’s never called that but that’s quicker to type). Impressed by the coding and genetic work that he’s done (he does have a PhD), she presses the bosses to hire him and get his computer program with which Rep Corp designers can hopefully finally crack the impasse that has kept them from being able to make domesticated dragons.

The original purpose for their product was to make killer dragons (with a built in desire only for a certain prey and with a very limited life expectancy) but obviously these can’t be sold as pets. Noah (the Wonderboy) and his fellow designers work feverishly to craft dragons that are cute, cuddly, and won’t tear your face off. They need to do it fast as the company is facing insolvency due to the dropping demand for the killers who did their work almost too well. On the edge of disaster, the designers finally come through. A little PR and marketing later and suddenly everyone (who can afford it) wants one. And lots of people want one for prestige and bragging rights as well as to replace man’s best friend as dogs worldwide have almost died off due to an untreatable disease.

Noah has another reason he’s picked his field of study, worked hard to master it, and finessed his way into this business that has almost unlimited computer ability and also – very handily for Noah – does its work by manipulating genetics. He’s also working on a deadline. When he begins to run into walls and frustrations, Noah realizes that there’s something else happening at the company. Something they’ll kill to keep quiet.

This is a fun read that combines genetic research, Jurassic Park, and a little bit of War Games. A reclusive genius works out how to get dragon eggs – made using genetic information from various reptiles – to actually hatch and then things eventually go to hell in a handcart with all kinds of events happening that ought not to be able to happen. The standard thriller stuff.

It’s fast enough, interesting enough, and entertaining enough that I found myself inhaling 200 pages a day and eager to see what would happen next. That pace also kept me from really focusing onto some things that are too good to be true, too easily done, or unfortunately too stupidly done for a man as smart as Noah is. Readers just need to keep flipping pages and stay zeroed in on the amazement of artisanal dragons and the thrill and mystery as Noah attempts to figure out what’s going on. There’s also a romance thread towards the end with someone who is Noah’s match in intellect and snark.

Just let yourself be carried away and don’t notice the vaseline smeared plot points or how Noah and his secret little dragonette appear to be able to speak each other’s languages. I almost expected to hear that “Timmy had fallen in the well!” It does help save the day but ended up inducing some eye rolling. Come for the dragons and accept some hand waving problem solving. B

→ Jayne
Previous article: What Sirius has been reading
Next Post: REVIEW: The Smallest Man by Frances Quinn