REVIEW: Between the Lines by Sally Malcolm 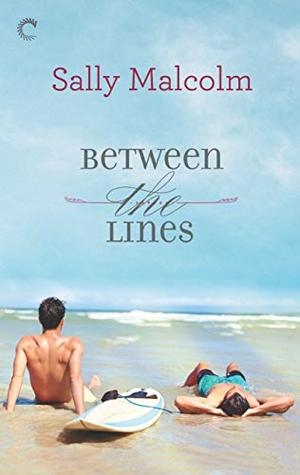 I haven’t (yet) read the first novel in this loosely connected series set in the fictional town of New Milton on Long Island (I think I have the geography right?). It isn’t necessary though as Between the Lines stands alone well. There are brief appearances from the main characters from Perfect Day (which is a contemporary mm Persuasion retelling I believe) but nothing intrusive or at all difficult to parse.

Luca Moretti is home in New Milton for the summer. His family has owned and operated the Majestic hotel for generations. His mother, Jude, has asked him to come home because she wants to sell it. Lux Properties intend to knock down the beautiful old building and build a golf resort for rich people instead. Luca is horrified. Jude would like nothing better than for Luca to take over the hotel but he left several years earlier, after Jude married Don Brennan, vowing to never sleep a night under his roof. Don was raised in a conservative religious household and took a “love the sinner, hate the sin” attitude to Luca’s homosexuality. Obviously, Luca’s sexuality is an intrinsic part of him and for Jude to accept Don after he’d flat out said he disapproved of Luca’s “lifestyle” felt like a rejection of Luca himself. So Luca left. He comes back in the summer but he stays in his camper van. The rest of the year, he lives a nomadic life doing surfing instruction or, in the winter, waiting tables at ski resorts in Whistler or Banff. But this year might be the last year.

Luca doesn’t want Jude to sell but he doesn’t want to take the hotel over himself. It’s not really a situation with an easy solution.

Theo Wishart is the son of the owner of Lux Properties, Eddie Wishart. Eddie is bluff and rude and difficult, often making Theo feel small and insignificant. At least Eddie accepts Theo’s sexuality. That’s something.

It is Theo’s job to seal the deal with Jude. Get her to sign on the dotted line and he will gain a partnership in Lux Properties and some much longed-for respect. Fail and everything his father believes about him will be true.

Theo has dyspraxia, which manifests itself in a lack of coordination and difficulty reading people’s expressions, among other things. Luca is muscled and athletic. Theo is more lightly built and can only dream of the physical feats Luca turns out on his surfboard.

“You seriously can’t tell whether someone’s for real or joking around?”

Not quite able to meet his eyes, he watched the way Luca’s capable fingers fiddled with the cold fries on his plate. Nice hands, strong and broad. “Not easily. Not when I don’t know them well.”

“Huh.” Luca shook his head. “I mean, it happens to everyone sometimes, but all the time? That’s tough.”

Theo looked up, startled—delighted—by Luca’s unexpected empathy. “It is what it is,” he said after a pause. “I just wish people would be more direct, you know? Say what they mean, tell me what they want without hinting or expecting me to read between the lines. It would make my life a lot easier.”

Both are immediately attracted to one another however, despite the potential sale of the Majestic laying between them.

Jude makes a deal with Theo: spend a couple of weeks in New Milton, staying at the Majestic. Let the hotel work its magic on him. Then talk to her about signing a contract. Jude doesn’t really have a lot of choices; she needs to sell. The hotel is suffering from very low occupancy,  there is no money for much-needed renovations and Jude’s health is failing. But she nevertheless hopes that Theo might be persuaded to save the Majestic and not demolish it. Or, that Luca would change his mind.

As Luca and Theo spend time with one another, the former showing the latter around, they strike up a deal of their own. They will have a summer fling for the duration of Theo’s stay in New Milton and then part friends with fond memories.

It’s no surprise really what happens from there. But the journey is sweet and sexy and charming even if it’s almost entirely predictable. Predictability isn’t a bad thing per se; I’m far more interested in the how anyway.

One thing I had mixed feelings about was the way Don Brennan was portrayed. He’s not any one thing. He certainly made mistakes and continued to do so over the course of the book. But he loves Jude desperately and is terribly worried about her health.

Had Luca been there, Theo wondered. Had he watched them dance? His heart ached at the thought, and he found himself wanting to reach back into the past and put his arms around Luca. To comfort and help him, to be the ally he’d needed. He couldn’t imagine watching his own mother marry a man who condemned something so fundamental about him. Yet, seeing Don and Jude together now, it was difficult to reconcile the Don Brennan Luca had described with this man so evidently in love with his wife. How could Don be capable of feeling such love for Jude, and yet deny it to Luca? And to himself. But humans were contrary creatures, capable of holding contradictory beliefs, and that had always been half Theo’s problem—people didn’t always make sense.

It was clear to me that some of Luca’s animosity toward Don was because he had “intruded” into his and Jude’s family of two. And I quite understand Jude wanting a relationship of her own. But I also found it difficult to forgive him for his attitude to Luca. Jude puts a positive spin on things, saying outright that Don no longer believes in the inherent “sin” of being gay but I didn’t see a ton of evidence of that. At the very least, I really wanted an explicit conversation between Don and Luca where Don flat out says he was wrong and that he’s sorry. He didn’t quite come close enough for me to be truly happy with it.

That said, I did appreciate the nuance. People are rarely just one thing, if ever, and Luca’s own behaviour wasn’t always fabulous. Still, I landed firmly on Luca’s side of the debate. To his credit, Theo does too. And the difference it makes to Luca – who feels that Jude chose Don over him – is profound.

The falling in love part is very fast. Theo is only in town for a couple of weeks but I was prepared to go with it. There was enough in the book for me to believe in them as a couple and, there was also a lovely epilogue about a year later which cemented their HEA.

Kudos to you because Luca is a bit of a unicorn – he doesn’t have a “huge” penis. Yay for average dicks. (It’s very unlikely this part of the review will ever make it onto a cover quote but a girl can dream can’t she?)

I was a little concerned about the hotel which didn’t strip the sheets on the bed Theo used for six whole weeks (!) but overall, the story was quite charming. Theo in particular won my heart.