REVIEW: Behind the Curtain by Beth Kery 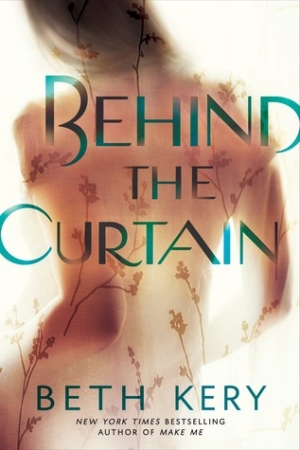 Behind the Curtain begins in present day, when Asher Gaites returns home to Chicago for a brief time from his journalistic assignments in the Middle East. He is shortly to take up a new post as Head of the European Desk for a newspaper in London. In Chicago he catches up with his parents and his fraught relationship with them continues – they own a media conglomerate and dearly want him to take his rightful place running the family business. Asher has always wanted to chart his own course however and this has ever and always led to conflict with his parents.

He also catches up with some close friends and that evening, they take him to a nightclub where the “Veiled Siren” sings behind a curtain. Only her outline is visible on the other side of the veil but the sexy timbre and bluesy jazz numbers take him back to a summer eight years before and his first love, Leila Barek. Could “Yesenia” be Leila?

The story then goes back to the beginning of that glorious summer, when Leila and Asher fell in love. Leila comes from a close-knit Moroccan-American Muslim family. She, her parents and various other extended family members are holidaying in Crescent Bay. One day a handsome young man stumbles upon her bathing naked in a secret lake. He is awed and attracted by the vision before him but doesn’t intrude, quickly leaving so that her privacy is not spoiled by him and the friends who are following after him.

Asher and Leila meet again that evening in town and are both quickly and deeply smitten. Leila is 19 and attending college to study business. Her passion however is music. She sings and writes her own songs and poetry. However, her family have impressed upon her the need to have a solid education and a reliable job. They would definitely not approve of her having a public singing career. She loves her family even as she feels confined by them.

Asher and Leila both have similar and contrasting conflicts with their families. Leila’s family loves her dearly but dating outside her culture is definitely not encouraged and the practical is prized over dreams. Asher doesn’t feel much love from his parents at all. He knows his parents expect him to take up a position in the family business after the summer. They do not yet know he has taken a job with the LA Times instead. After Asher graduated from college, for the first time in ages – possibly ever, he felt a glimpse of paternal approval. He knows he will have to break the news to his parents at the end of the summer that he is not doing what they want or expect him to do. But for this summer, he will relax and enjoy. And then he meets Leila.

Leila and Asher meet secretly and over a few short weeks, fall in love. However, Asher’s parents will not approve of Leila and Leila’s parents will not approve of Asher. While Asher is prepared to defy his parents (he’s never feel truly accepted by them so it is easier for him to walk away if it comes to that), Leila is deeply torn. She is not financially independent, she wants to please her parents and she’s afraid to go against their wishes – not because they would hurt her but because she would hurt them. Ultimately, the lovers are betrayed by Asher’s skeevy cousin and Leila is forced to choose – Asher or her family.

Given they are not together at the start of the book, it is not really a spoiler to say that Leila chooses her family. Asher is broken-hearted and Leila not much better.

Eight years later their paths cross again. What has changed? What has stayed the same? Is there a way for Asher and Leila to be together? Can Leila’s family ever accept him? Asher is leaving for London soon – what future is available for them?

I don’t know if you have Moroccan heritage but if you don’t you’ve clearly done a lot of research because there was a rich tapestry of Moroccan culture running through Leila’s story. I enjoyed reading about the traditions and the food and I liked the importance they placed on family. I understood where Leila was coming from a lot more than Asher, even though her upbringing was very different to mine. I couldn’t help but see Asher as something of a poor little rich boy at times. There is a sharp contract between Asher and Leila – he is financially rich, she is rich in family and culture. Asher also displays his privilege in other ways. Despite his family difficulties things have mostly come easily to him. He is a rich white man in a rich white man’s world. When Leila balks at leaving everything she has known for what could turn out to be nothing more than a summer fling, he doesn’t understand and thinks of her as being motivated by fear. Perhaps she was – but I couldn’t blame her.

I’m by no means an expert on Islam so I can’t say for sure whether the depiction in Behind the Curtain was accurate (and besides, I’m sure there is a range of what is “accurate”). The differences in religion (Asher is Protestant) didn’t appear to be responsible for any barrier between them.  That said, I’m sure that Islam influenced the culture and her family’s ideas of what a suitable partner for Leila was (in much the same way that Asher’s family expected him to marry a Protestant girl). But that Leila is Muslim wasn’t specifically stated to be of concern to Asher. Neither was Asher’s religion (he’s not very religious at all from what I could tell) anything that Leila was concerned about.

When Asher and Leila meet up again in present day Chicago things are indeed different. Leila is forging her own path but is doing it in a way that works for her – singing behind the curtain under an assumed name gives her the creative joy she has wanted and allows her to pursue her passion. But her family (apart from her cousin, Tahi) do not know and will not know. Leila doesn’t crave fame and fortune – she just wants to sing. There is tension in this because it is not a perfect answer and outsiders think Leila should ignore those family ties. Asher is pleased Leila is pursuing a music career but wonders if she has allowed herself to be boxed in too much, whether in trying to please everyone she shortchanges herself. The questions are asked but not answered explicitly. Ultimately the narrative stands for the proposition that there is no right or wrong answer – if Leila is happy that is enough.

The nett amount of time Leila and Asher spend together is fairly short. One has to buy into the star-crossed lovers theme very deeply to accept that life-changing decisions are ready to be made in so short a time.

One other thing; when Asher and Leila meet again, Leila is dating someone else. Leila breaks up with her boyfriend very quickly after Asher and she hook up again – but it is after they have sex so, it is cheating. I guess readers will have different views about whether this is a dealbreaker or whether one can create a workable excuse to get around it – perhaps Leila and her boyfriend had not explicitly agreed to be exclusive? They had not been dating long. It’s possible. I admit the cheating did give me some discomfort. I think the idea is that readers are so invested in Leila and Asher by that time that they’ll give it a pass. For me, I didn’t really see what the point of Leila having a boyfriend at that time was for the furtherance of the plot; the relationship certainly wasn’t a barrier to Asher and Leila getting back together – not even a little bit, and, as Leila and her boyfriend had not yet had sex it didn’t really serve to show that Leila was actively embracing her sexuality before Asher arrived back on the scene.

It is a romance so of course there is a HEA but I found the ending a bit rushed and somewhat unsatisfying. One of the core questions the book asked was whether Leila could have it all – but perhaps the answer was just no. I’d like to have seen an epilogue set perhaps a year or two into the future which showed how things panned out.

I liked Behind the Curtain but I felt a little disconnected from the emotion of the book at times – perhaps because I regularly thought Asher was a little too selfish and a little too demanding. Ultimately I was convinced of their love for one another and I did believe their HEA. I wish they didn’t have to compromise so much in order to have it though.