When I heard that the sixth book in your Guild Hunter series would be a fourth book about Elena and Raphael, I gave a mental groan. Book three, Archangel’s Consort, made me feel the conflict between this couple was played out. I would rather read Aodhan’s book, or Illium’s, or Venom’s, or, most of all, Sorrow’s, than a retread of the old argument about whether it’s safe for Elena to have the freedom she needs to be herself. 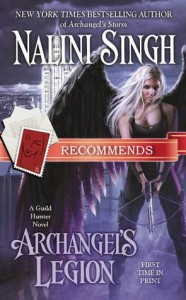 But in order to read those other characters’ books and not be lost, I figured I’d need to read this one. Fortunately for me, this book turned out not to be as much of a retread as I had feared. While the conflicts that came up between Elena and Raphael were rooted in the relationship that had been established in Angels’ Blood, Archangel’s Kiss and Archangel’s Consort, the issues between them played out differently, with the characters, Raphael especially, showing real growth.

Before I get to that, though, here is a summary of the novel’s opening. Archangel’s Legion begins with Raphael delivering two pieces of news to Elena: His mother, the ancient archangel Caliane, has invited them to a ball celebrating the city of Amanat’s awakening, and the archangel Michaela, endangered by the coming Cascade, has requested shelter and protection for herself and for the unborn child she carries.

These two pieces of news, dismaying as they are to Elena, are quickly eclipsed by storm clouds that turn out to be made up of birds. Then the birds begin to fall from Manhattan’s sky, and soon angels are falling in their wake.

As Elena sets up an infirmary in hers and Raphael’s home, receives reports of injured angels from Sara and relays them to Aodhan who, in Dmitri’s absence, is in charge of tower operations, Raphael ascends in the midst of The Falling to catch and rescue younger angels.

When The Falling ends, hundreds of New York’s angels are out of commission, forcing Raphael to recall some of his forces who are stationed further away to protect a vulnerable Manhattan.

Raphael believes The Falling is a sign that the Cascade, an event that brings archangels greater powers as well as madness and inhumanity, is burgeoning. One of the archangels may have attained the power to make angels fall from the skies, but even via process of elimination, Raphael and Elena can’t figure out who it is.

That night, Raphael dreams of the field in which Caliane left him to die, and he begins to hear haunting whispers asking him who he is. When he wakes, Elena sees fire in his wings, but Raphael dismisses it as an illusion of the light.

Meanwhile, Elena faces challenges of her own. Her father’s rejection has brought her younger half-sister Eve, a guild hunter in training, to tears, and Elena is determined to confront Jeffrey. Another guild hunter has apparently lost it and purchased an arsenal of guns, and now Elena and her fellow hunter Ransom must track him down. Worst of all, in the midst of that hunt, Elena and Ransom discover a dead vampire who appears to have been infected with a lethal disease.

All of this is only the beginning. Archangel’s Legion also sees Raphael and Elena forging new alliances in preparation for the coming war with their old and creepy enemy, the Archangel Lijuan, and the unknown new enemy who has created the disease and caused The Falling.

For although Raphael, like all the Archangels, is evolving, for him accepting new powers may mean losing his humanity, something neither he nor Elena wants. Yet if he rejects the new powers that come with the Cascade, New York may be vulnerable to his enemies’ attack. To defeat Lijuan and the disease-maker, Raphael will need to gather every ally he and Elena have. It will take a legion of fighters to win the coming war.

As may be evident from this plot summary, Archangel’s Legion relies a lot on external conflict,with much less internal conflict (by which I mean conflict that takes place in a main character’s heart and mind) than I usually like. At this point, four books into Elena and Raphael’s relationship, that is probably a good thing – if these two were still making up their minds about what they felt for each other, I’d be frustrated with them.

There is some internal conflict though, and I really appreciated that it wasn’t the same one we’d seen in the earlier books. Instead the conflicts within the characters centered on Elena’s unconscious trust issues resulting from her father’s painful rejection of her, and Raphael’s need to protect his people, something that accepting new powers could make possible, versus his fears of losing his humanity and his love for Elena if he did take on the new powers that the Cascade offered him. 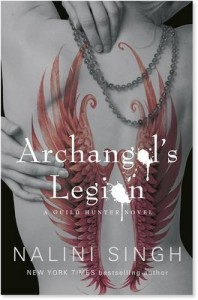 What I really liked about both these issues is that they felt like progress for both characters. Consciously Elena trusted Raphael, but unconsciously it was harder for her to believe he would always be there for her in a way that her father had not. This was not about her thinking Raphael was an overweening jerk, but about something that went deeper than that.

Meanwhile, on Raphael’s side, his desire to hang on to his humanity felt like a big step, especially when comparing the Raphael of this book to the Raphael we encountered at the beginning of book one, Angels’ Blood. While I’ve enjoyed reading about Raphael in some of the past books, this was the first book in the series in which I truly sympathized with him. It was evident he wanted to remain caring toward his people, even as he wanted to protect them from powerful enemies, but he didn’t know if it was possible to do both.

If I have a criticism on the Elena/Raphael side of this book, it’s that although I’m far from a prude, most of the sex scenes didn’t engage me that much. I didn’t skim them, but I was tempted to do so in some cases. There are only so many ways to write about the same couple having sex, and by the fourth book, Raphael and Elena’s relationship’s bedroom dynamics don’t feel that fresh anymore, so I hope there won’t be quite so many sex scenes in the next Elena/Raphael novel.

As far as the external conflict in the novel goes, with so many irons in their enemies’ fire, the external conflicts were numerous and big, especially in Archangel’s Legion’s climactic scenes. I don’t want to give those away, but suffice to say that Raphael and Elena’s world is rocked by something that happens near the end, and that event left me eager to read more in this series.

One thing that did bother me a bit was that though some of what happened was brutal, none of the characters I had an emotional investment in died. I’m not usually one to advocate for characters’ deaths (in fact I generally hate when that happens), but in this case, the death of a minor character we’d come to care about at least a little would have gone a long way toward grounding the storyline in reality.

Overall though, the external conflict was one of the strengths of this book. I was grateful that there wasn’t as much disturbing / horrific stuff going on as there was in Archangel’s Kiss, while at the same time the storyline felt fresher and more eventful to me than in Archangel’s Consort. There was even some progress on the Jeffrey/Elena front, something I’ve hungered for since book one.

While I’d still prefer books about characters I don’t know as well as I know these two by now (there is more mystery surrounding those less-well-known characters and therefore also more opportunities to be genuinely surprised by things they say and do), I think I’ll be more receptive to the idea of another Elena/Raphael book than I was to the idea of this one. B for Archangel’s Legion.

→ Janine
Previous article: REVIEW: Zipper Fall (A Steel City Story) by Kate Pavelle
Next Post: For Love of A Hero